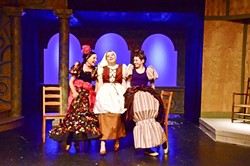 Indeed, it is possible for a cast of children to perform a lovely play! The SLO Little Theatre is putting on Cinderella this month for its Academy of Creative Theatre (ACT) summer program.

The play, directed Shelagh Garren, is a watered-down adaptation of the Rodgers and Hammerstein original, which was released in 1957 and starred Julie Andrews. Since this version was altered for the Little Theatre, it was cut down to only one hour, losing some of the story and character growth. But thankfully, this version still manages to hold onto the endearing likeability of the original.

The story, at its core, is the same classic tale that everyone is familiar with. A lonely girl works as a scullery maid for her evil stepmother and ugly stepsisters; a lonely prince is pressured by his parents into holding a ball to find a suitable wife; lonely girl meets fairy godmother and gets a spectacular makeover; lonely girl meets lonely prince. Romance, and an obsession with glass footwear, ensues.

However, in this play, the romance is downplayed a little more. This is, after all, children’s theater. Cinderella, played by Cali Singleton, and the prince, Riley Hutcheson, share nothing more than a chaste dance and a laugh before they stroll offstage. It’s there where they presumably share the kiss that’s alluded to in later scenes.

The eponymous character, Cinderella, could easily be incredibly boring to watch, since she barely has anything going for her in the way of character development. But Singleton, with her lively expressions and lovely mezzo soprano voice, was not boring in the least. She made this princess just a little more interesting and relatable. She’s sweet without being saccharine, and utterly—for lack of a better word—charming. The song, “In My Own Little Corner,” where Cinderella talks (or rather, sings) of her dreams, features Singleton at her best, as she crosses the stage, pretending to hunt lions in Africa, and perform arias in Milan before resigning herself to staying in her dusty little corner as a servant.

There were a lot of standouts in this play, so it’s hard to choose just a few. Conner Allen did an excellent job playing the shrieking stepmother, balancing out the annoying voice so that it wasn’t too grating on the ears. And while he did fumble some lines in the beginning, he eventually relaxed into the role of the villainess, showcasing his comedic prowess in “When You’re Driving Through the Moonlight.” Here, the stepmother sashays around the stage, flapping the ever-present fan in her hand, reminiscing about the ball. In addition, the stepsisters, played by Penny DellaPelle and Elizabeth Tharp, were awkward, snorting bundles of hilarity. The “Stepsisters’ Lament,” in particular, was great, as the ungainly duo question what it is about the mystery girl that the prince finds so alluring, and why a boy can’t like them for a change. It’s a valid question, people! Or at least a humanizing one. The song takes the sisters from two unholy-—yet amusing—little terrors, to two self-conscious, awkward girls who just want to find someone for themselves.

Then there’s the eternally hungry king, played by Jed Authier, who is another welcome piece of comedic relief. Authier has great comedic timing, as he battles with his wife over the need for a ball, and then the cost of everything. “If he’s happy, why should he get married?” he exasperatedly asks the queen. And when Cinderella runs from the prince and the party, the king races on stage, a half-eaten leg of turkey clutched in his royal hand. Classic.

And last but not least is the fairy godmother, played by the quirky Bella Yaguda, who engineers Cinderella’s transformation, and her reunion with the prince. This is Yaguda’s debut performance with the SLO Little Theatre, but hopefully this won’t be her last. She rattled off a dizzying tongue twister of words in the song, “Fol-De-Rol,” where she denounces people who rely too much on dreams. This is a welcome change from the Disney version of the tale. In this adaptation, the godmother insists that it’s “dangerous to believe in dreams too much,” and that sometimes, “you’ve got to help yourself.”

But it’s when the fairy godmother starts waving around her wand that the real magic of the play is found. The costume design, which was a team effort between Sharon Woodside, Rosemary Canfield, Angelina Tharp, and Randal Sumabat, looked like pure elegance, like something out of Grace Kelly’s closet. Cinderella’s transformation from plain little serving girl to a beautiful, would-be princess was accomplished with just a mere twirl around the stage. And the pumpkin carriage, which could actually be rolled about the stage, added to the magic of the scene.

While there were small technical issues with various microphones throughout the play, it wasn’t enough to detract from the charm and charisma that the cast brought. If you’re a fan of fairytale romance, and want to see adorable little ballerinas twirl around, then this play is definitely a must-see.