The clarion call heard round the county

Deep in the heart of what Linda Camplese calls SoGro (South Grover Beach), a dark new space is growing, evolving, and defying simple definition. It has a stage, but it's not really a theater. Paintings and photographs are welcome, but it's definitely not a gallery. And the other workshops, rehearsals, and performances that call ECHO Artspace home are as fluid and indefinable as the space itself. ECHO Artspace is a black space, a space where a little bit of everything happens, where fire spinners and aerial fabric dancers cross paths, and anyone is welcome to make an artistic vision a reality.

"I call this neighborhood SoGro because it's sort of the last affordable industrial community where everyone's really supportive," said Camplese, who owns the building where ECHO Artspace was born. 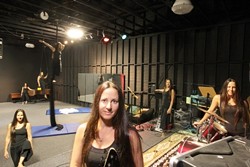 # functioned as a warehouse for Scarecrow, Camplese's Halloween manufacturing company. When she decided to sell the mask-making division, she packed off the mask molds and equipment, and the space that was once stacked with pallets of macabre merchandise was strangely empty. Scarecrow still uses the space two months each year to produce vampire fangs, but for the remaining 10 months, Camplese could do whatever she wanted with it.

With a husband in a band, a passion for art, and friends with similar interests, Camplese decided to turn the former warehouse into an anything-goes art space where her husband's band could practice and she could follow the whims of whatever muse happened to tickle her fancy. The neighborhood shuts down at the end of the workday, so nobody's around to be bothered by or file complaints about any noise resulting from their artistic endeavors.

In February, efforts to transform the space began. Camplese and her friends painted the walls black and built the stage and dressing room over the course of a few weekends.

"There are a lot of beautiful white galleries where you can show watercolors of Morro Bay, but there aren't a lot of black spaces where you can do a down and dirty monologue, uncensored, political," Camplese explained of her choice of black paint.

The wood used to construct the stage and dressing room was donated by an acquaintance like most of the materials that can be found in ECHO Artspace. Someone anonymously donated $6,000 worth of theater lights to the endeavor. A young Grover Beach couple gave the space a piano, a business across the street sold them mirror panels at a discount, and Home Depot contributed to the effort by offering cheap carpeting. Even the pillows on the couch trickled in, one by one, from different donors.

As far as what will occur in the hodgepodge, ready-for-anything space, Camplese is keeping an open mind albeit a mind bursting with ideas. Her use of the word "space" in her venue's title is quite deliberate: To define it more precisely might limit its uses, not to mention undermine its malleable nature. Camplese hopes that someone will use ECHO as a venue for experimental theater. She believes the space is also ideally suited for poetry readings. And though she loosely refers to herself as the space's creative director, the title fails to reflect how democratic the process of using the space actually is.

"What I want to see here are things that are talkie and intelligent and idea-driven," Camplese said. "But it's up to the artist to produce whatever they want to do. It's up to the facilitator to make sure it all happens."

Despite the fact that the space started as a cooperative effort between Camplese and a few friends, word has spread about how it can become anything it needs to be. A photographer expressed interest in hosting an exhibit there. And a recent aerial fabric dance workshop at ECHO was so popular that a regular group will continue to meet long after the weeklong workshop. Camplese also plans to construct a puppet theater sometime in the near future. And it just gets wilder from there not to suggest that puppets and fabric dancing are in any way tame.

Camplese, who believes that all art is inherently political, is looking for someone to host a debate/forum she calls Political Slam. Though the details for Political Slam are still somewhat hazy, the event would include an opinionated, vocal group of people. Individuals would sign up to get on stage for a set period of time and rant, curse, yell, and express anything that needs expressing. The audience, in turn, would yell and heckle right back at the person. Following the person's rant there would be a designated talkback.

"Artists are public servants, and because we have the luxury of being creative, I think we should be speaking politically," Camplese said. "You have things that are really horrible in the world and you have incredible human beauty. The challenge for artists is to come up with minor solutions along the way."

While Camplese is clearly the space's point person, she has no intention of turning ECHO into a full-time job. For that reason, individual artists are responsible for their own projects, which includes securing necessary materials and promoting their event. The only things the artists don't have to worry about are censorship and generating revenue leaving them with the rare opportunity to create simply for the sake of creating. Far from demanding a rental fee for the space, Camplese is asking artists who use the space to pay the overhead for what they're doing, which pretty much boils down to the PG&E bill. Beyond that, any artists who do generate revenue from their event are asked to donate a portion to the charity of their choice. In this manner, ECHO binds the community and its artists together, emphasizing the responsibilities of the artist as an expressive, creative segment of the community.

Finding artists to use the space hasn't been much of a challenge. Strangers frequently contact Camplese, wanting a part of the artistic playground so many people had a hand in creating. Following through on their intentions may be a slightly different matter, but Camplese isn't concerned.

"I believe that the ratio will be that for every 20 people that see the space, really love it, want to do something with it, one person will actually do something," she said. "Come in and like it and follow through or come in and like it and don't follow through. So what? Become an audience member. I'm hoping that people are going to meet and collaborate and use the space in ways I can't even anticipate. Maybe we can do some freaky cool things."