The comedy and tragedy of dispatch

At 10:45 p.m., Holly Porter has the phone pressed to her ear and she’s trying to get the person on the other end of the line to answer.

“Hello?” she says again and again. Then she punches a button to mute the phone’s receiver and turns in her chair smiling like a kid who just heard a dirty joke.

“Dude, where’d that bong go?” she tells us, parroting the person on the line.

Porter is one of three dispatchers on duty tonight. Across the room, John Giese, a chief deputy with the San Luis Obispo County Sheriff’s Department acting as the watch commander for dispatch, is leaning on a cubicle dividing wall like Lumbergh from the movie Office Space.

“What, did he butt-dial or something?” he asks.

Porter spins her chair back toward her desk.

“I’m calling him back,” she snickers. “I wanna make sure he found it.”

Aside from a foot pursuit in Oceano, a gigantic party in Pismo Beach, and a report of a driver headed the wrong way down the Cuesta Grade, this was perhaps the highlight of the night.

Porter calls back but doesn’t get any answer. Normally, she might have to send a deputy to check in, but this call was from a cell phone and there’s no way to pinpoint where it originated. So it’s logged as an incomplete call.

These types of calls seem par for the course. Porter and the other dispatchers all have stories about calls they’ve received, particularly butt-dials that became a regular part of the job with the advent of cell phones, especially those with a hot key for 911.

Porter remembers getting other non-emergency calls on the 911 line, like one she described as people having “relationship time.”

“It sounded pretty good,” she says with a laugh.

A few minutes later, the 911 line rings again. Porter picks up and starts clicking through the screens on one of her monitors. She types “female, possible alcohol poisoning.”

She clicks a few more screens before logging the call into the system. Then it bounces to Senior Dispatcher Kelly Fontes, who notifies the deputies in
the area.

“I’m going to send her an ambulance because she definitely needs some help,” Porter says to the person on the phone. She presses the foot pedal below her desk to activate her microphone and notifies the nearest ambulance.

The female, it turns out, is 18 years old, and she’s unconscious.

Minutes later, the phone rings again. This time it’s someone calling to report a party at a campground on the outskirts of Atascadero. The caller says he’s heard two gunshots and warns that the deputies are going to need a four-wheel drive to make it out.

Giese calls deputies at the North County station to help them track down keys to the Hummer which they're having trouble locating. He doesn’t seem that concerned—even without the Hummer he thinks they can get their patrol cars up the rough dirt roads without much trouble. He repeats throughout the night, “They’re big boys, they can handle it.”

On this particular Friday night, there are 20 to 30 deputies—mostly men—out in the field at any given time, and three dispatchers huddled in a small corner of the County Office of Emergency Services, all of them women. In fact, of the 14 dispatchers with the Sheriff’s Department, all but one are women. If you asked them why this is the case, they’d tell you it’s because men can’t handle the job.

“You guys are not very good multi-taskers,” Fontes says proudly.

On any given night, there are likely three to four dispatchers overseeing the various terminals—the 911 terminal, the radio terminal to deputies, and the business lines—housed on the first floor. Each terminal is equipped with four computer monitors, a phone, a microphone for radio communications, and a foot pedal. And each dispatcher is expected to handle it all at the same time, which sometimes requires that they simultaneously coach a caller on the other end of the line while notifying an ambulance and logging notes about the call for deputies who pull up the transcript on their vehicle dashboard computers.

Of course Giese—and New Times photographer Steve E. Miller—thinks women gravitate toward the job because men don’t have the patience to deal with some of the calls. 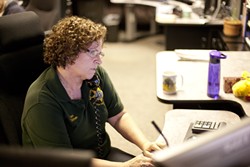 Between May and August of 2011, local dispatchers handled more than 7,000 calls during the day shift, and another 6,400 during the graveyard hours.

The 911 line can be frequented by people looking for directions, rude or vulgar callers, and occasionally, a parent who’s frustrated with his kid. Jan Dishen, for example, remembers dealing with a father who couldn’t get his 7-year-old to clean the garage, so she ended up talking with the kid to make him do his chores.

Teri Cox once got a 911 call from a phone booth in Oceano. The man on the other end was being extremely “vulgar,” she said, describing what he wanted to do to her and what he wanted done to him. So Cox kept the man on the line long enough for deputies to get there and arrest him.

“911 is an emergency line,” Cox said. “It’s not for your convenience … and it is used quite often for a convenience.”

Though it’s a crime to make a bogus 911 call (a violation can be punished by fines up to $1,000 and as many as six months in jail), misuse of the line is rarely enforced. Most of the non-emergency calls that come over the emergency line (about 70 percent, according to dispatchers) are pocket/butt-dials. Another headache for dispatchers is caused by parents who let their infants play with phones. Dispatchers give regular presentations to first-grade classrooms, and in the days that follow, they usually see a spike in calls from kids playing with the phone.

Tonight, however, Dishen is spending most of her time trying to calm a woman, let’s call her Brianna, who frequently calls the non-emergency dispatch line. Most of the time Brianna is just a little annoying—she knows the deputies’ shifts and calls constantly to speak with them, sometimes so often that she overloads their voicemail—but tonight she’s frantic. She calls again and again from her cell phone. Early in the night, she told Dishen she was hiding in some bushes near a bus stop in SLO, worried that people were after her. Dishen sent SLO police to check, but they couldn’t find her.

“Stop hiding from them,” Dishen says when Brianna calls back.

Then Dishen gets another call from a woman who wants deputies to get her husband out of the house. He just got home from work and he’s enraged, possibly drunk.

“Has he hit you tonight?” Dishen asks in a soft consoling voice. 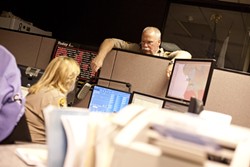 The woman sounds tiny on the other end of the line, like this has been going on for a long time. Dishen says most women won’t call for help at first; it usually takes at least seven incidents before they’ll reach out.

These are the types of calls that dispatchers have to get used to. In a way, they distance themselves from the reality of these calls because if they don’t, they won’t last.

“But there’s some people you can’t help but be compassionate [toward],” Dishen says.

Whatever the situation, dispatchers are trained to be the calm ones. They can sometimes sound harsh and demanding of their callers, but as they explain, they have to take control in order to get the information they need.

Take for example, a woman who called 911 when her 17-year-old daughter went into labor. Cox took that call, and she ended up coaching the two women through the birth before help could arrive.

For a while, all the phones are ringing. And then everything goes quiet. The dispatchers turn in their chairs to chat about their kids and families. Fontes takes a sip from her water bottle and sighs.

“We should get the Twister game out or something,” she jokes. 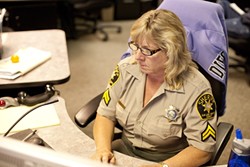 Porter arrives at about 8 p.m. to relieve Cox from the 911 terminal.

“It’s going to be a great night,” she says as she settles into her chair. “What’s the coffee situation?”

For a while, the phones stay dead. At about 12:30 a.m., Fontes is recounting the vet situation with her kid’s dog in between the occasional message to dispatchers and a few calls about a suspected prowler in Los Osos.

Then a voice on Fontes’ radio shatters the silence.

The voice is one of six deputies in Oceano. They’re chasing a man on foot after a vehicle stop in which two suspects fled.

“He went into that alleyway,” a deputy shouts over the radio.

Giese is back at his post leaning over the cubicle wall, listening to the radio.

“He needed a place to stay tonight, so he figured he’d run, end up in jail,” he jokes.

As it turns out, the suspect running from deputies is from Santa Barbara County, and he’s on parole. Deputies say they saw an ankle bracelet, and Dishen jumps on the phone to call the state in hopes of running a GPS search. But she’s stuck on hold and the suspect disappears.

What they do know, however, is that the suspect had 18 days before the end of his parole. Giese and Fontes mutter simultaneously, “Moron.”

A voice comes over the radio again.

Giese and Fontes both mutter, “Shit.”

Eventually, one car crashes into a house and one of the suspects is arrested. But it takes Dishen more than 30 minutes to get the state on the phone, and by the time they run a search on the ankle bracelet, the other suspect has cut it off. After all, he’s got nothing to lose. If he’s caught, he’s going back to prison.

For tonight, the suspect gets away, but Giese says they’ve got his name, so they’ll send deputies to his home later to pick him up.

Across the room, Porter’s on the phone, juggling 911 calls.

“OK, what’s going on?” she tells the caller. “OK, take a deep breath. Are you home alone right now? Who’s there with you?”

“Are you having problems with your family tonight?” she says while typing “RP [Reporting Party] crying and hard to understand.”

By 2 a.m., the phones are relatively quiet. But, as Dishen says, “It can be absolutely dead and in an instance, everything’s crazy.”