Jon Bartel has a lot on his mind these days, maybe too much. Frontman for local country act The Creston Line and member of now defunct rock act American Dirt, the singer-songwriter's most recent endeavor is Hell, a four-song EP dripping with angst, ennui, and melancholia. With a title like Hell, what were you expecting, lollipops and doe-eyed children? 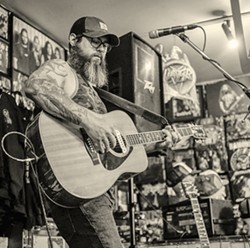 He recorded his EP at his own Northwall Studio in Atascadero and notes it's a departure from previous Creston Line albums, though it sticks to his "twang pollution" roots. He calls the album "a collection of songs written about struggles with anxiety, alcohol, existential dread, and general avoidance of the void."

Safety warning: Not to be listened to while already depressed! The EP, which is irresistibly wistful and emotionally engulfing, begins with "Photographs," a song written entirely in Bartel's head "while mowing the lawn during an anxiety-gripped afternoon in late autumn."

"Someday I'll be dead and the rider on my back/ He will head out for the canyon, he will light out for the pass/ And look a little lonely as he lets his claws retract/ Yeah but then he'll get to grinning as he coils up his lash/ And he'll whisper to himself that I was the best he ever had/ And he'll turn there in the saddle and he'll tip his Stetson hat in photographs/ In photographs/ I always look like I could laugh/ In photographs," Bartel croons over lonely piano chords, a solemnly strummed guitar, and a mysterious plastic plinking sound.

"My band, The Creston Line, is kind of fractured these days thanks to us all doing life stuff and the world ending, so I just decided to play and record everything myself at my studio," Bartel explained via email. "The songs are weird, so the recording process had to be weird. I did a lot of stuff backwards, used shitty instruments, played piano through tube amps, stuff like that. I arranged parts for keyboards a lot more than I have in the past, which was fun since I'm actually a classically trained pianist, or at least I used to be."

The song is unquestionably forlorn. What was driving his lawn-mowing anxiety in "Photographs"?

"It was a melody that started running around in my mind one day when I was feeling pretty bad about shit—this crippling anxiety had been waking me up at 2:34 a.m. every morning for like a month, and I'd just lay awake and wonder if I stopped thinking about my heartbeat if my heart would stop beating. I was also trying to learn how to smile—people always tell me I don't smile in pictures, so I was mowing in this weird honey-light in the evening and stretching my mouth out, trying to work my smile muscles. My jaw was just shaking like crazy with fatigue, and then suddenly this image appeared in my mind of this demon cowboy on a horse tipping his hat to me as I died, like 'Thanks for the ride, sucker.' It's been kind of a dark year. The cool thing about that song is I used a broken plastic guitar that I got at a yard sale to make that 'plink' sound over and over."

The EP's next song, "September in a Life of Getting Drunk" is "an ode to what David Wilson of American Dirt once termed the 'Shameover,'" Bartel explained, "trying to beat back the post-drunk horror and guilt before the bar opens again."

It's a song that really drives home the cycle of alcoholism. Bartel's really stripping the romance out of partying, man. What would Charles Bukowski say? 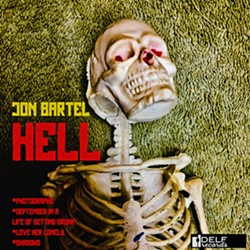 "Well, I did spend a good chunk of my life trying like hell to live up to the expectations of old Hank Chinaski, but it turned out that I couldn't do it as gracefully as I wanted to, so a few years ago I quit drinking for almost 24 months," Bartel revealed. "It was driving my anxiety like a runaway freezer truck with the brakes on fire. I had to stop. But it sucked. It still sucks. I feel like I'm still hungover from like 20 years of booze. That being said, I'm kind of into rosé spritzers every now and then. Sorry, Buk."

The EP ends with "Shadows," which Bartel said he wrote in "an old friend's kitchen in Denver after a two-day-long panic attack in the Utah desert."

"I was driving out of eastern Utah with a darkness on my eyes/ Somewhere just outside of Grand Junction I went blind/ I got my two boys in the back seat, my pretty wife holding my hand/ But I can't see a goddamned thing, I don't know how anyone can," Bartel sings.

It's one helluva a dark track that leads to suicidal ideation. Is it autobiographical?

"Yeah, that was the low point in a couple years of low points," Bartel admitted, "right about the time I decided I needed to sober up. If you've never had a panic attack in a truck with a broken air conditioner while running low on gas in the desert when it's 117 degrees outside and you're suddenly convinced that you don't deserve your own children and then the sun goes dark for like five hours and you finally start to come back to reality and realize you're in a Walmart in Grand Junction buying a hatchet and beer that you drink while weeping at the edge of a 1,000-foot mesa ... well, good."

"I've been frustrated for a while anyway with the changing merch sales situation over the past few years," Bartel said. "It's getting harder and harder to move CDs, but for those of us who grew up with jewel cases and liner notes, it's hard to accept that people would rather have a download code for a single than buy a full album. Now, with COVID, the merch table no longer exists anyway, so that's that. However, I did actually find it pretty freeing to just put the whole thing up on Bandcamp in like 20 minutes and be done with it—I worry too much about all the release details normally, but when it's all just online it's kind of like, 'Oh well.' I actually don't even care if people buy it or not—just stream it, enjoy it, whatever. I like the songs, I'm proud of them, and I'm glad they're out in the world. If we ever go back to live shows again after the apocalypse, I'll probably press it as a 7-inch vinyl record."

I had to ask, is music and songwriting Bartel's therapy? I also had to say his music is reminding me more and more of John Moreland, the poet laureate of deeply felt folk.

"Well, I actually started going to therapy recently," Bartel said. "My therapist said, 'Wow ... you're a lot.' But songwriting isn't really therapy I don't think, not for me. Songwriting is more like a bloodletting—it's this compulsory witchery, an alchemism that leaves me deeply drained. But I also like it, so I guess it's mystical masochism? I never quite say it all though, so it's never a true relief. I'm humbled by the comparison to Moreland. I opened for John a couple of times. The first time was the night I found out that my best friend shot himself to death. The weird thing is that this is the first album I've put out in years with no 'dead buddy songs.' I guess it's just all about me this time. I'm my own dead buddy right now."

You can listen to Bartel's new CD on his website, jonbartel.com, or his Bandcamp site, where you're invited to buy the EP for $5, but currently no physical copies exist.

Let there be light livestream!

Carbon City Lights performs a livestream concert to celebrate the 130th anniversary of the Point San Luis Lighthouse on Saturday, Aug. 8 (4 to 6 p.m.; tickets are free to $1,000 on my805tix.com; viewable on bigbigslo.com/houseparty).

You can enjoy this groovy indie alt-rock act for free, but this is a fundraiser and there's a raffle ($10 tickets or $8 each for five or more) where you can win stuff like a private dinner for six at the Lighthouse Head Keepers Quarters, a pair of season tickets for 2021 Lighthouse Concert Series, a handmade Lighthouse Quilt by Jeanne Bradbury, a full week getaway at Indian Palms Country Club Golf Resort in Indio, a weekend Getaway at Pine Garden Retreat in Pacific Grove, or if you're feeling flush and really want that private dinner in the Lighthouse Head Keepers Quarters, they're selling five more for $1,000 each.

The money helps this all-volunteer organization maintain its education program as well as manage the continued operation, maintenance, and restoration of the historic light station. Help them keep the lights on! Δ