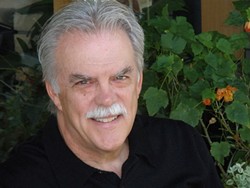 View a list of National Poetry Month events in SLO.

Editor's note: Due to unforseen circumstances, Kevin Clark will not be appearing at the Steynberg Gallery on April 6. Instead, Patti Sullivan will join Darius Degher for that reading.

April is National Poetry Month because, as T.S. Eliot opens his masterpiece of Modernism The Waste Land:

Established by the Academy of American Poets in 1996, National Poetry Month is celebrated around the country by teachers, librarians, booksellers, the poets themselves, and other connoisseurs of verse from the formal to the free. Despite the fact that Eliot seems to be as excited as we are in SLO County about spring rain stirring our dull roots, April remains a dangerous time between seasons, a time when change can happen.

Of course, the Academy isn’t copping to the Eliot reference; on its website, the official explanation is that “inspired by the successful celebrations of Black History Month (February) and Women’s History Month (March) … the Academy chose a month when poetry could be celebrated with the highest level of participation.” But we all know the truth: Poetry is one of our greatest cultural achievements, but it’s hardly our easiest one to stomach, let alone enjoy. It takes time and attention or, as Ben Johnson put it, “rare poems ask rare friends.” The truly remarkable thing about poetry is not that it’s difficult, but that it’s worth the difficulty.

The announcement of the Pulitzer Prizes also coincides with poetry month—this year, it will be April 14. Last year’s winner for poetry was Sharon Olds, for her 2012 collection Stag’s Leap (which incidentally also won the T.S. Eliot Prize). Long-time Bay Area resident, the late Jack Gilbert, was a finalist for his 2012 Collected Poems, a magnificent volume and a must-have for fans of Gilbert’s personal brand of “poetry as magic.”

Locally, our poetry month dance card is pretty full, too. Kevin Clark, a member of Cal Poly’s English department faculty whose most recent collection, Self-Portrait with Expletives (2010), won the Lina-Miles Wever Todd Poetry Series Book Competition from Pleides Press, will be featured at Poetry at the Steynberg on April 6. He’ll read from his new book-in-progress, a verse novel titled Magdalene in Ecstasy, along with a few uncollected poems making their debut.

When it comes to the awkward question of influences—like embarrassing prom or yearbook photos, they represent a poet’s adolescence—Clark cites fine company indeed. “In college I really liked Eliot, Ginsberg, and Plath,” he tells me. Clark may have the heart of a Beat, but he has the brain of a Modernist, as his work so deftly demonstrates.

You can hear the echoes of Eliot’s Italianate enthusiasms in an epistolary poem at the heart of Magdalene in Ecstasy. The speaker’s voice in “Letter from Florence” is at once distinctive and resonant, as in this excerpt:

In the advanced poetry workshops he teaches every winter and spring quarter, Clark has worked with many promising student writers both from within the department and without. When asked if students are coming to Cal Poly to write poetry, however, he defers, citing the area as the most significant factor. “We’ve [Cal Poly] had a fair number of award-winning teachers … and it’s beautiful here. I think San Luis Obispo is our calling card.”

It’s a familiar refrain these days in the self-promoted “happiest city”—a slogan that will hopefully inspire a dose of healthy poetical critique alongside the dazzling eclogues and idylls.

Poet, editor, and publisher Benny Biesek is one local wordsmith not afraid to offer up some of that criticism. “I have mixed feelings about National Poetry Month,” he says. “I feel that it’s a great idea, and I love being a part of poetry. The local poetry scene is vibrant yet underfunded, in my opinion. I hope that, in time, there will be more acceptance of poetry and poets in general; they seem, still, relegated to a subsection of the greater population.” 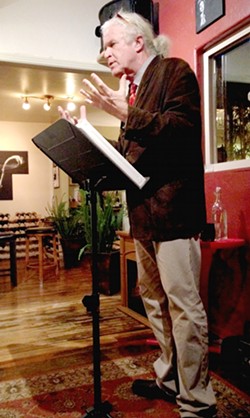 Biesek’s New Theorem Press (NTP), which curates local readings and events as well as being a small poetry press, is currently seeking local poets to perform original work. With the look and feel of youthful energy behind it, NTP seems poised, albeit precariously, on the edge of a breakthrough. His newly minted Friday Edition Poetry Series, which takes place on third Fridays at the San Luis Obispo Museum of Art, is scheduled to run through September. The next Friday Edition falls in the middle of poetry month, on April 18 at 7 p.m.

“I like National Poetry Month in that it allows for a greater awareness of poetry and poets,” continues Biesek, “and it makes sense, to me at least, to provide such support for poets.”

The festivities continue at Linnaea’s, one of SLO’s longest-established poetry venues that has nonetheless managed to avoid becoming “the establishment.” The April 20 installment of the monthly Corners of the Mouth reading series will feature Santa Barbara poet Diana Rabb, Los Angeles poet M.C. Ford, and local poet Celeste Goyer. Goyer, who also hosts the “Poets and Storytellers” reading series at the Wise Owl in Cambria, reaffirms the vibrancy of the local poetry scene.

“Our audiences are genuinely excited about spoken word performances,” Goyer tells me. “It’s wonderful to see people arrive early at our readings just so they can get a seat in front, no matter who is reading.”

It’s this kind of openness to emerging writers as well as established local voices that keeps this, or any, poetry scene seeking the “new” that Ezra Pound famously urged poets to pursue. The economy of poetry that would later transmute into something so ugly for Pound has managed to keep its innocence even here, in a county that continues to creep up the list of the country’s most expensive housing markets.

“The great thing about poetry is that it is not a commodity,” Goyer points out, “so the commercial world largely leaves it alone. On the one hand that makes it very tough to make any money from poetry, but on the other hand it is a field inhabited only by those who are there for love.” 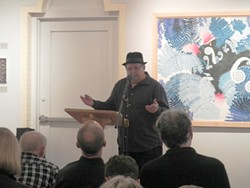 Like Clark, Goyer cites the natural beauty of the county as one of the main sources of inspiration for local poets. “It [poetry] feeds off the energy of the other arts communities that are so incredible here—music, fine art, food, and wine—and of course the natural beauty. Is it any wonder that our poets are inspired to brilliance?”

Poetry month will most definitely end with a bang and not a whimper at the San Luis Obispo Library, with readings from current and former poets laureate of San Luis Obispo on April 26 from 2 to 4 p.m.

“This is going to be historic!” gushes Kevin Patrick Sullivan, SLO poet laureate emeritus, curator of several local reading series, and one of the county’s greatest advocates for poetry. “Who knows how long it will be before we get such a wonderful crew together again?”

Sullivan’s work is immediate and uncensored, a nice juxtaposition with Kevin Clark’s more measured pen. Should you have any concern about the variety of work you’re likely to hear this month, put that concern to rest. An excerpt from Sullivan’s prose poem, My First Encounter with Random Gun Violence, exemplifies his fluid style:

These poetry month events and others leave no excuse not to turn cruelty into kindness this April. In William Carlos Williams’ poem Asphodel, That Greeny Flower he reminds us, “It is difficult/to get the news from poems/yet men die miserably every day/for lack/of what is found there.” You have plenty of opportunities this poetry month—go out and find it.

Arts Editor Erin C. Messer lingers in the chambers of the sea at emesser@newtimesslo.com.