The first thing to strike you about “Picasso and Braque: The Cubist Experiment, 1910-1912” may well be Pablo Picasso’s enigmatic Man with a Clarinet, which greets viewers upon entry. Or it may be the exhibit’s unorthodox color scheme, which eschews a sterile white cube aesthetic in favor of the palette and style of the artists’ Parisian apartments as young men. But I’m most taken with Picasso’s god-awful haircut. 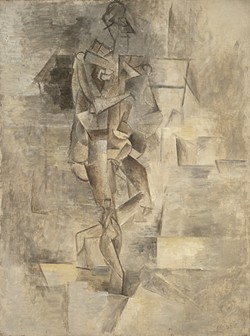 In the photograph guarding the exhibit’s entrance, it sits jaggedly on the artist’s head, looking like a bowl cut done by a college buddy with no bowl at hand for reference. It’s that cut that reminds us that the two great artists, whose work has profoundly affected (and is still affecting) the course of modern art, were humans once, as fallible and subject to criticism as anyone else.

Of course, this effect—like the placement of the paintings, the color of the walls, the photographs of the artists as hot-blooded, shabbily coiffed young bohemians—is hardly a product of happenstance, but reflects the deliberate and calculated choices of Santa Barbara Museum of Art curator Eik Kahng. An exhibit dedicated to the two artists, and the two pivotal years of analytic Cubism, has long been a dream of Kahng’s. She calls Picasso and Braque’s relationship “the greatest romance in the history of art.”

“Nobody really can follow what they are doing,” she said.

Indeed, upon seeing the work side by side, the pair seems to have possessed a private artistic language unintelligible to anyone else.

The show, which hangs through Jan. 8, 2012, begins in a sort of foyer, leading to a larger wing. In the smaller, introductory room are several influential works by the likes of Paul Cézanne and Henri Rousseau, pieces that convey the inspiration and techniques that fed early Cubism. Kahng, who expresses herself in serene, thoroughly conceived sentences, pointed out these paintings’ palette of blues and greens, their “leakage of plane to plane,” and their “willingness to blur figure and landscape”—all key parts in the evolution of proto-Cubism, she explained.

But those visitors who don’t have the good fortune to have Kahng by their sides for assistance in the mental unpacking of this exhibit have the option of borrowing an iPad equipped with an iCubist app, a program Kahng worked to develop with computational designer Reza Ali. The app provides viewers with magnified, infrared, and x-ray images of any piece in the show the iPad is held up to, providing intimate glimpses of the works’ compositional strata: the things these two masters initially painted or sketched, then thought the better of and covered with fresh layers of paint. (Such a program is certainly guilty of dissecting a beautiful illusion. But it also allows a wonderfully informative, voyeuristic look into the processes of these important artists—an art historian’s autopsy, if you please.)

Another iCubist insight is a timeline tracking the influences Cubism took from the previous century’s artists, the influences it would have on the next century, and, of course, the strange trajectory of the Cubist experiment itself in its proto, analytic, and synthetic incarnations. It’s as if the museum felt it necessary to educate each visitor on roughly two centuries of modern art, if only to enable that visitor’s deeper appreciation of the explosion of radical ideas that transpired between two artists in two years—and which await the eye in the adjoining room.

It’s Kahng’s lofty goal that each viewer be able to tell the difference between a Picasso and a Braque upon leaving the museum. This is a tricky endeavor, considering the two worked side by side during this period, one artist rarely completing a piece without input from the other. But as Kahng (and the app she helped design) can tell you, there are myriad subtleties that differentiate the styles of Picasso and Georges Braque. Where Picasso was more freely abstract, Braque remained slightly more figurative, I learned, standing in front of Braque’s Girl with a Cross. Indeed, a clear depiction of a woman’s face is visible in the painting—a far cry from Picasso’s unapologetically abstract Portrait of a Woman. (Still, both toyed equally with perspective, and Girl with a Cross is no exception: As the eye travels down to her throat, the angle seems to shift. Looking at her neck is like peering down a deep well, her collar becoming a downward-spiraling staircase.)

It was Braque, Kahng informed me, as we moved on to his Still Life with Bottles and Glasses, who first incorporated those letters and numbers and collage elements into his paintings, choices that would inspire generations of great artists to follow.

The exhibit’s deep blue and magenta wallpaper was designed to mirror that of the artists’ homes and studios. Viewed in the context of the gilded, baroque décor of those workspaces, the art itself seems all the more alien and unexpected. The wallpaper, quite intentionally, helps one realize how strange and unprecedented the Cubist experiment was.

Several traditional African masks and figures—the geometric, stylized visages of which surfaced in many of Picasso’s Cubist works—have been mined from the museum’s permanent collection, and are displayed alongside the show’s 16 paintings and 20 etchings and drypoints, in order to further illustrate the artists’ inspiration. Such design choices are yet another example of the potential of an exhibition’s presentation to ground the art it contains within a cultural and art historical framework.

Then there’s the museum’s extensive programming surrounding the exhibit: an ongoing film series on Cubism, several performances and discussions expounding upon the subject, and, just before the closing of the exhibit, a dramatic reading of passages from Picasso at the Lapin Agile.

But despite all the writing and thinking that has been done on Cubism, despite all the factual knowledge that exists around it, despite iPad apps, films, symposia, and spectral imaging, the movement gives no succinct explanation for its being. It’s impossible to tell, for example, if a painting’s vantage is above, below, or next to the subject—or, magically, all of those things at once. Once you think you’ve almost got it figured out, the pictures collapse in on themselves, jumbling all sense of perspective and space, like the most brilliant idea never to be articulated.

Arts Editor Anna Weltner is above you and next to you. Get a fix on her at aweltner@newtimesslo.com.