The dame and the sir

A legendary musical duo takes the stage in Arroyo Grande

When I read that Cleo Laine and her husband, John Dankworth, were to be appearing at the Clark Center, I was very excited. I hadn't seen or heard them since 1988, when they played at the Greek Theatre in Los Angeles. Well, they've changed a bit over the years--not the least of which is that they're now known as Dame Cleo and Sir John. But I still remember them as Cleo and John from the days when we all lived in London. I was secretary at Ronnie Scott's Jazz Club, and they were just beginning their careers. 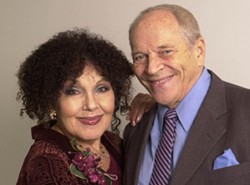 # I knew that they had a son living in Northern California, so I rang him up to find out if I could reach his parents for a "chinwag" (John's term) and--sure enough--they were scheduled for a visit in a mere matter of weeks. Since the couple had recently been honored in England on their 80th birthdays, I opened my conversation by saying how incredible I thought it was that they were both still tripping all over the globe, performing.

"Why is that so incredible?" shot back Cleo in her typically wry British way. "Lots of us are still doing that. For example, Dave Brubeck, who's older than both of us. You know, we are instinctively nomads."

They sent their newest work, a four-CD set accompanied with a hardback book of stunning photos and a history dating back to the early 1950s when they both hit the British musical scene.

John, who plays clarinet and alto and soprano saxophones, formed his first band in 1951 and began writing his own material and arranging well-known jazz standards. According to the new book, the ensemble really took off after Cleo joined and created what was to become one of the most famous jazz partnerships ever.

A chronology of their work, both together and as individual artists, would fill another article. Suffice to say that everything they touched seemed to turn to gold with Cleo earning several Grammy nominations (in three categories: popular female singer, classical, and jazz vocalist) and winning one for the live recording of her 1983 Carnegie Hall concert. Although she started out humbly, as "just a singer," the years have brought many distinctions. In the late 1950s, she embarked upon a career as an actress in such musicals as Valmouth and A Time to Laugh, and gave a show-stopping performance as Julie in Showboat at the Adelphi Theatre in London. In 1972, the rest of the world discovered her and she debuted at New York's Lincoln Center, followed by numerous Carnegie Hall gigs.

All through this period of growth, John--who became her hubby back in the '50s--was distinguishing himself as a progressive jazz musician and a sought-after composer and arranger for film, theater, ballet, and musicals. He has created works for choir and orchestra, symphonic variations, a piano and clarinet concerto, and music for string quartets. He cites Benny Goodman, who was also classically trained, as one of his early influences. This put the multi-layered musician in the necessary position to aid and abet his wife's forays into many and varied settings.

Soon after, Cleo struck out on her own, she began a series of unique concerts and recordings in which she has tackled the poetry of Shakespeare and W.H. Auden, among others. This is where John's innate sense of the classical repertoire took shape in his association with his wife. By this time, Cleo had discovered her four-octave range, and John took up the challenge in his musical scoring. Needless to say, they made headlines with these uncommon musical events, and attracted other artists interested in collaborating with them. Cleo has recorded with a number of others, such as Ray Charles, Dudley Moore and--most notably--her own children, vocalist daughter Jacqui and bassist son Alec (who also co-leads an orchestra with his dad).

John writes for all kinds of ensembles, and even manages to contribute to the music school he and his wife founded many years ago in Wavendon, called "The All-Music Plan." Currently he's working on a major new suite, which will have a double premiere in London this year, first with a big band at the London Jazz Festival, followed three months later as a complete orchestral rendering. Although Dame Cleo is no longer appearing in the musicals of old, she has a vast collection of material from every corner of the music world to offer.

So, what does this experienced couple have in store for audiences at the Clark Center? John will provide a solid jazz group familiar with all the genres that Cleo is likely to offer--jazz standards, lyric poems, some popular songs. And a musical camaraderie not often found onstage. These two highly honored and masterful performers will, I know, give anyone a quarter their age a good run for their money. They've kept themselves up-to-date and young as springtime--so be prepared to be thoroughly entertained and musically educated.

INFOBOX: Get your tickets!

Cleo Laine and John Dankworth will be performing at the Clark Center in Arroyo Grande on Jan. 26 at 8 p.m. Tickets cost between $35 and $45 and can be purchased by calling 489-9444 or visiting www.clarkcenter.org.

Francesca Nemko is a local poet, writer, and performance artist specializing in jazz. Contact her via Arts Editor Ashley Schwellenbach at aschwellenbach@newtimesslo.com.