The De Groot Nursing Home for Children is forfeiting its license to bill Medicaid effective Oct. 9.

According to a notification obtained Sept. 25, the home’s operator, Sjany de Groot, informed officials with the California Department of Public Health that she would forfeit the license due to federal and state licensing requirements “that have never been requested in the prior 23 years.” 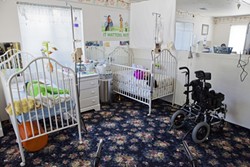 The home has historically taken in children with grim prognoses and permanent disabilities brought by parents and transferred from hospitals, but many have lived well past initial lifespan estimates. Inspectors from the California Department of Health, along with federal inspectors, completed a compliance survey July 2 and issued a lengthy report detailing deficiencies at the facility and outlining requirements to bring the home back into compliance.

Unable to meet all of those requirements—the most heavily debated of which is a suggestion that de Groot build new walls and rooms—de Groot has already begun to scale back operations. De Groot told New Times one of her seven paid nurses already had her last day, and the last of her paid staff will clock in for their final days on Oct. 2.

On Sept. 9, the home notified parents of children currently living there and is arranging to place two of its clients in new facilities. De Groot said she will continue to care for three children, for whom she is a legal guardian.

Health Department spokesman Ronald Owens said in an email that the decision to terminate De Groot’s Medicaid certification was based on unfavorable findings in the July inspection.

Owens cited “infection control issues in maintaining separate ‘clean’ and ‘dirty’ areas for completion of tasks that require sanitary areas to perform; ensuring habilitative services for clients at risk for functional decline; and, staffing issues where volunteers replaced paid facility staff” as situations that jepardized the safety of children.

De Groot and others associated with the home have balked at such assessments.

Though the home submitted a plan to correct deficiencies, that plan did not address all of the necessary corrections and did not meet federal laws and regulations, according to the department.

“A decision to terminate a provider is never made lightly as it directly impacts the residents of a facility,” Owens said.