The Dead Don't Die is slow and weird ... like a zombie 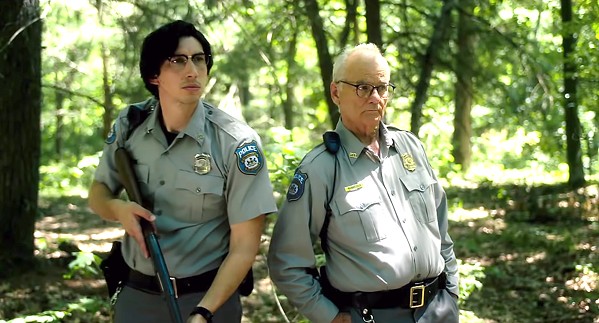 Glen Over his long strange career, Jarmusch has earned the auteur title. He's unquestionably an amazing writer-director. And this cast? Holy hell, that's a lot of talent on screen! And yet this film seems to squander its potential. Its pace borders on glacial. It's so deadpan that even the non-zombies feel devoid of life. Ultimately, its message—which by the way feels tacked on at the end by Tom Waits' voiceover narration—seems to be that humanity has been zombified by our shallow, capitalist, consumerist culture; anesthetized by our vices; and our utter annihilation is much deserved. That's pretty heavy for a zom-com. Shaun of the Dead and Zombieland were a lot more fun than this dour affair. Of course, between the cast and witty writing, the film is still worth watching, I just wish it would have been better, and I wish Jarmusch had found a more satisfying ending than this dizzyingly contrived one. Essentially what we have here is a zombie satire, and a very self-aware and self-reflexive one at that. When we first hear Sturgill Simpson's theme song on the radio, Driver's Ronnie says something like, "Oh, I love this song," and Murray's Cliff says, "It sounds really familiar," to which Ronnie says, "That's because it's the theme song." Huh? Later, after Cliff berates Ronnie for continuously saying, "I don't think this is going to end well," Cliff yells, "How do you know?" Ronnie says, "I read the whole script." These are some strange choices. Hermit Bob seems to be the only character able to see human culture for the mess that it is; hence, he lives alone in the woods away from people. Then there's the odd, otherworldly Scottish undertaker Zelda, which Swinton is clearly having a lot of fun playing. These bizarre characters are enough to keep the film interesting even as it drags along, one shaky, stilted zombie step at a time toward its weird conclusion. Maybe seeing 6-foot-2 Adam Driver pull up in a tiny red convertible Smart car makes it all worth it. Maybe not.

Anna What the film is striving for, I'm not sure. It's not a horror flick; it's more of a gory comedy whose point is sort of a mystery. There is no doubt the screen is full of talent, sometimes pulling off Jarmusch's dry comedy and sometimes trudging through it. When the local diner gets raided by coffee addicted zombies, the police are left with two torn-up bodies and a mystery on their hands. One person after the next asks, "Was it a wild animal? Or perhaps several wild animals?"—literally three or four times in the span of the scene. It's funny, yes, but repetitive and slow. There really isn't a whole lot going on, and while we can thank Swinton's Zelda for some pretty awesome zombie takedowns, the film suffers from a lack of action. It doesn't move along very well, and the weird breaks in the fourth wall are funny but also odd. Driver is good as the oddball deputy; his Smart car pull up is quite literally one of my favorite moments in film. Hermit Bob's purpose is to give us perspective from the outside—someone in the community but apart from it, watching from the woods while the town crumbles overnight as it's overrun with zombies. It definitely had me laughing, but it also had me confused at times and quite frankly bored at others. I'll see anything Bill Murray puts his name on, and while there was some pretty good comedy—especially between him and Driver—it's not making my top 10 list. It ran a little too slow to keep my attention rapt.

Glen I'm pretty much the same with Bill Murray; he's always worth watching. I see he's playing himself again in the upcoming Zombieland sequel, Zombieland: Double Tap, which is currently in post production. Should be interesting considering he died in the first one. Of course, that's the thing about zombies. They don't stay dead. As for this film, it sure doesn't seem like it's going to be remembered as one of Jarmusch's better films. According to Rotten Tomatoes, critics (53 percent) are liking it slightly more than audiences (45 percent), but both seem to be rating it a bomb. Maybe I'm missing something because Jarmusch is usually a really smart director. It's certainly fun to see punk rocker Iggy Pop as one of the coffee craving zombies, and Sturgill Simpson has a cameo as Guitar Zombie. Steve Buscemi as the racist Farmer Frank Miller is interesting, too, as is Danny Glover's hangdog Hank Thompson. Caleb Landry Jones stars as quirky gas station/memorabilia store owner Bobby Wiggins, who falls for "big city hipster from Cleveland" Zoe (Selena Gomez), who's passing through town. All these various characters and cameos have their moments on screen, but the sum of the parts doesn't really add up to much. Should you go see this? Yes, if you like Jarmusch, Murray, and zombies. Will you be blown away by how awesome it all is? Nope. No way. I'm filing this film away as a curiosity.

Anna It's a hard one to recommend flat out—as you said, it is hitting pretty low ratings across the board. It isn't a waste of time, but the 105-minute run time stretches on. If I see Zombieland while scrolling through channels, there's a good chance I'm going to stop in for at least a few minutes of re-watch, but with The Dead Don't Die, I have a feeling I'll be scrolling on past to the next channel. It feels sort of pointless, which I don't necessarily see as a flaw but perhaps a choice—one that I don't think pays off. Its saving grace is a truly funny cast with good rhythm and timing, an ensemble that works well together. It's a weird night in Centerville, that's for sure. Don't get too attached to this or that quirky character. The zombies are relentless and take the town down one citizen at a time. It's just kind of a weird movie, and if you like that type of thing or are a die-hard Murray fan like me, this is worth hitting a matinee. Just don't be too disappointed if it isn't everything you hoped and dreamed it could be; it's just weird enough to satisfy and just funny enough to keep you engaged. Δ