On the Central Coast, the work of politically minded pop-surrealist painter Mark Bryan needs no introduction. This is perhaps why the artist statement Bryan chose for his latest exhibit, “The Rupture,” currently on view at Steynberg Gallery, discloses little about the artist’s inspiration, process, or technique. Instead, Bryan excerpts the revelation texts of J.R. Dobbs, leader of the Church of the SubGenius (go ahead and google it; we’ll wait).

When the end of the world arrives, writes Dobbs, those who “truly believe without any fear or doubt” will have their old bodies emptied and “instantaneously recreated on the planet escape vessels of the Overlords.”

Dobbs’ description of the end of days probably says more about why Bryan does what he does than Bryan ever could. Religious mania, aliens, space, destruction, and “dolphin/human virtual lovemaking?” Sounds like a Mark Bryan painting to me.

Bryan’s importance as a satirist of popular culture, religion, politics, and occasionally of art itself is matched only by his technical skill. The artist recreates texture—the chrome of a futuristic automobile, the thick fur of a Bunkey (that’s a bunny/monkey hybrid)—like nobody’s business. And his stylized, dizzying tableaux expertly blend realism with caricature. A most recent example is the new painting Ship of State, one of the defining pieces of “The Rupture.” The piece reinterprets the White House as a sinking Titanic: the wealthy, secure in their lifeboats, using their canes to ward off a drowning 99 percent. 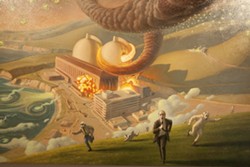 The most infamous of these tableaux is still Bryan’s The Mad Tea Party, a sinister parody of the Bush Administration, painted years before the Tea Party was the name of an American populist movement. Its 2010 sequel, The Mad Tea Party, Part D’Uh, a central work in Bryan’s last solo show, reappears in “The Rupture. Though it’s now somewhat dated (references to the BP oil spill and to the Tea Party movement have a distinctly 2010 flavor), the piece is still largely relevant.

Bryan’s also the sort of artist who paints beautiful landscapes but claims “I can’t leave it alone,” adding a robotic uprising to a winery scene in The Last of the Merlot, or improving upon an idyllic painting of Yosemite by adding a cartoonish Bambi caught in the purple beam of a UFO in The Collectors. (“There,” one imagines Bryan saying to himself, brush in hand. “Now it’s finished.”)

Devil’s Due, one of Bryan’s latest, depicts the Diablo Canyon nuclear power plant—itself situated, one bitterly notes, in a lovely beachfront location—in a massive meltdown. Businessmen and workers in Hazmat suits are pictured fleeing the scene, as a spiraling fire-cloud with a monstrous face leers menacingly. Glowing radioactive skulls pour out of the sky like rain. They plop, steaming, into the Pacific Ocean, creating swirling patterns weirdly evocative of Van Gogh’s Starry Night.

It seems like every time Bryan has a show, Diablo Canyon’s back in vogue again. The artist’s last solo show followed Japan’s Fukushima disaster, which—aided by a slew of could-it-happen-here? news stories—prompted widespread anxiety about our own nuclear power plant. Bryan responded by unearthing one of his early works, a painting of the power plant melting down—humorously rendered in the style of folk artist Grandma Moses.

This time around, of course, Diablo
Canyon’s planned seismic tests have locals in an uproar. Once again, Bryan taps into the cultural and political zeitgeist like some sort
of deranged prophet.

Though his button-pushing political pieces tend to get the most attention, much of what Bryan does is quite apolitical. He’s got an eye for absurdity, and whether he finds it in the nightly news, at the circus, or in his own imagination seems purely inconsequential. Hello Kitty is a prominent figure in his latest work, in one piece seen manning a Hello Kitty-shaped robot with spiny, metal Hello Kitty whiskers. It’s terrifying in a precious sort of way.

Religion, of course, gets duly made light of. Army tanks shaped like cathedrals roll over a hill in Kingdom Come. Moses parts the Red Sea for a bunch of classic cars in Exodus. Jesus and Satan put on a talent show for the Gerber baby, who, curled up on a chaise lounge with a half-naked geisha, laughs ecstatically at the devil’s pyrotechnics. Jesus, meanwhile, stands awkwardly to one side of the stage, lamely clutching a fish.

“The Rupture” is brilliant, funny, and lacerating, creating a world in which the surreal lives next door to the mundane. Death rides a rabbit. Monkeys live inside people’s heads.

“People will become their dogs,” writes Dobbs. “Oil will mix with water. Toast will be self-buttering. Alien sitcoms broadcast millions of years ago in other star systems will become hits.”

The Rupture, ladies and gentlemen, is already upon us.