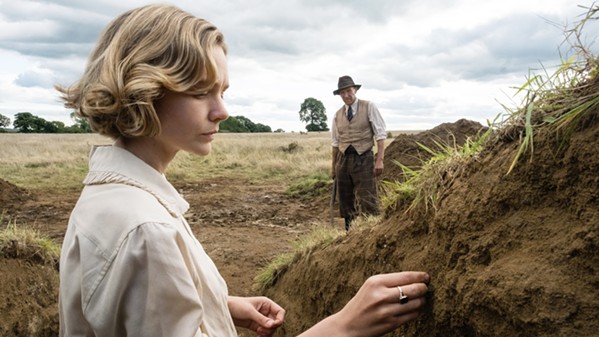 Simon Stone (The Daughter) directs this historical biographical drama about an important 1939 archaeological excavation of Sutton Hoo, written for the screen by Moira Buffini from John Preston's novel. If you're looking for a history lesson, this one plays a little fast and loose with facts to accommodate a romantic side plot, but most of the basic elements are there.

It's the eve of World War II, and widowed landowner Edith Pretty (Carey Mulligan) hires self-described excavator Basil Brown (Ralph Fiennes) to dig up what appear to be Viking era burial mounds on her property, which Brown believes might be much earlier and of Anglo-Saxon origin. Since Brown left school at 12 and is considered an amateur, he's not given much credibility by the archaeological community, but Pretty believes in him.

As the dig proceeds and its importance becomes clear, Cambridge archaeologist Charles Phillips (Ken Scott) arrives, declares the site to be of national interest, and a struggle over control ensures. It's ultimately the story about how an unknown and disrespected digger discovered an amazing historical treasure and only recently was acknowledged for it. Great performances make it highly watchable. (112 min.) Δ