James Franco stars and directs this biopic about filmmaker Tommy Wiseau (James Franco), who meets Greg Sestero (Dave Franco) in an acting class. The two form a friendship and head to Hollywood to make a film called The Room. The screenplay by Scott Neustadter and Michael H. Weber is based on the book The Disaster Artist: My Life Inside The Room, the Greatest Bad Movie Ever Made, by Greg Sestero and Tom Bissell. (103 min.)

Glen The Disaster Artist is the story of an earnest, quirky dreamer—a real oddball but also a free spirit. It's about testing the limits of this dreamer's philosophy and can-do spirit. It's also about the limits of friendship, commitment to one's art, and the danger of mixing dreams with unlimited funding. Greg Sestero is a 19-year-old pretty boy who wants to become an actor. Tommy Wiseau is a charismatic weirdo who's long on confidence but short on talent. He's a mystery to Greg, who wishes he had Tommy's fierce belief in himself. The first third of the film develops their burgeoning friendship as they attempt to get a foothold in Hollywood. Tommy may be confident on the outside, but he's also emotionally needy, and he becomes possessive of Greg. When it becomes clear that Hollywood isn't interested in Tommy and only mildly interested in Greg, they hatch their plan to make their own movie, mysteriously financed by Tommy himself. The Disaster Artist accentuates the mystery behind Tommy, who claims to be Greg's age (though he's clearly much older) and whose Eastern European accent he claims comes from his New Orleans upbringing. Tommy is a liar and deeply protective of his lies, telling Greg he's not allowed to talk about him to anyone. It's all very strange, and though you might think watching a film about the making of a terrible film would also be terrible, it's in fact awesome! Tommy is deeply interesting, and though he's a talentless actor, director, writer, and producer, he committed to his "art." That's admirable.

Anna I've heard of The Room before, mostly in jokes or conversations regarding the worst movies ever made. I didn't realize what an epic mess the whole production was from start to finish, and the odd and mysterious man behind it. Since I hadn't actually watched the film before seeing The Disaster Artist, I did a quick search on YouTube for the "best of" (aka the worst of) The Room. Then watching the actors re-enact those same scenes in The Disaster Artist was a testament to how spot-on the cast was in their retelling. They don't have to exaggerate for effect; the original film really was that bad. Beyond making fun of a terrible film, The Disaster Artist is a fascinating study of Tommy, who may not be the weirdest person in the world, but that man is certainly a contender. Kooky doesn't even begin to describe him, and the fact that to this day no one knows his real age, where his accent comes from, or how he amassed enough money to self-fund a $6 million movie, shows what a guarded and odd person he is. All that kept running through my head while watching his antics replayed by James Franco was, "Who the hell is this guy?" James did an amazing job taking on the role, and the deep dive into Tommy's psyche he must have done is admirable and a little frightening, to be honest. Don't get lost in there, James! I also had a lot of fun watching brothers James and Dave Franco play off of one another; in many ways it seems that Greg has that sort of familiar, brotherly love for Tommy—the kind of love that says, "I think you are a nut, I hate what you are doing, but I love you anyway, weirdo."

Glen According to IMDB, Wiseau was born on Oct. 3, 1955, in Poznan, Poland, but who knows? Rumors said the money came from organized crime. All I know is that he and Sestero (born July 15, 1978, in Walnut Creek) are still friends and still act together. Sestero wrote a film that he and Wiseau starred in called Best F(r)iends, about a homeless man who befriends a mortician, and they go into business together, leading to paranoia. There's also a sequel. These guys are both committed dreamers, making it happen! Aside from the humor, what I most enjoyed about The Disaster Artist was watching Tommy and Greg's friendship evolve, devolve, and evolve again. The Franco brothers do a great job slipping into these two characters, James especially, adopting Wiseau's affectations without it feeling like mere mimicry. At the end of the film, after the credits begin, scenes from The Room and those same scene recreations from The Disaster Artist are played on split screen, so you can see them simultaneously. Wow. Just, wow! It's hard to believe The Room exists and still has a life out there. James has paid homage to Wiseau and his terrible movie, and in what can only be described as perverse irony, I bet The Disaster Artist ends up getting some Oscar nods. I'm sure Wiseau will feel like he deserves the credit. 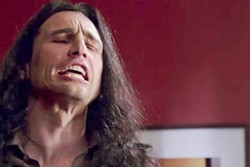 Anna While Wiseau's dream to produce a serious movie was overrun by the audience's laughter at the premier, he didn't fare so bad in the end. While its original run only grossed $1,800, its cult status since then made Wiseau his $6 million back and then some. He did things his own way, like buying incredibly expensive movie equipment instead of renting it, which is pretty much unheard of in Hollywood. I really liked watching as script supervisor Sandy (Rogan) and DOP Raphael (Scheer) go from cautiously unsure of Tommy and his production to completely baffled by the comedy of errors that this movie becomes. They were the first to make fun of both the film and Tommy himself, a point that Wiseau does not appreciate. He so very badly wants to be taken seriously, but that isn't happening, and the longer the shoot goes on the worse things get. I was cringe-laughing throughout The Disaster Artist; it's just such an unbelievably odd and awkward story, and watching the bones of what is arguably one of the worst films ever made is hilarious. I can't say I look forward to further work from Wiseau, but from James Franco both in directing and acting ... yes, please! He seems to have no qualms about getting weird, and I like that. Δ