The dive that delivers

Like the swallows returning to San Juan Capistrano or the salmon swimming upstream to spawn, this week marks another annual event: The abandoning of college stuff. 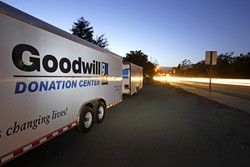 # As you drive around town, you can observe this yearly ritual by keeping your eyes on the curb. There you'll find ratty couches and cheap particle board computer desks with hand-written "FREE" signs taped to them. Head to a dumpster near student housing or Cal Poly's dorms and you'll find a veritable treasure trove of college-life detritus unwanted clothing, pilfered milk crates that doubled as furniture, half-used bottles of bath products, abandoned photos of formerly-best-friends-forever, and a whole lot more.

Okay, I admit it: I'm a dumpster diver, and so are a lot of my friends. For the last few years I've been jumping in the ol' Ford pick-up with a couple of pals, donning gloves, and digging through students' trash. I've found some pretty amazing things, too. For instance, last year's haul included a poly-fill "Cowboy Up" vest with the tags still on, a black and teal sleeping bag that looked like it may have been used once, a Teflon-coated skillet, a perfectly good set of silverware (service for four!), several wicker baskets, a cute little silver trashcan, a copy of Sports Illustrated's Swimsuit Edition (hubba-hubba!), a plastic football, some fabric, an ice chest, and more.

Tammy Starelli, who got me into dumpster diving in the first place, makes hand-painted signs and is always on the lookout for discarded lumber or anything she can transform from trash into treasure. She also is a fan of the odd: "My absolutely favorite thing I ever found was a 1942 San Francisco Rifle Association Trophy. It has a little man in a hunter's cap pointing a rifle. I absolutely love it. I keep the rifle pointed at the front door."

She and I have made a tradition of timing our scavenger hunts to the departure of the students, trying to figure out when the best times would be, working out garbage pick-up routes, reconning favorite spots. She's got lots of dumpster diving stories, like how her friend Chris met a guy dumpster diving and they ended up going on a date, or the time she and two girlfriends were dumpster diving downtown.

"I remember when my friends Angela and Kim were in the dumpster behind the old Delight Bakery in that parking lot near Broad and Marsh," recalled Tammy. "These four big guys walk by and said, 'Hey, looking for something?' And my friend said, 'Yeah, I lost my retainer,' and then she held up a toilet seat. Maybe you had to be there, but I thought it was hilarious."

I've run into students of mine I teach English at Poly and admit I found myself feeling a bit sheepish, but as my friend Tammy says, it's easier in a group.

An old friend, Jenny Anthony, used to like to go along with us for the dumpster run ride, not because she was interested in collecting junk like me, but because she was fascinated by all the notes, loves letters, and photos thrown out by students. Some are funny, some sad especially cards expressing eternal love that were carelessly tossed away like so much used Kleenex.

In fact, Jenny helped Tammy get over her feelings of sheepishness when dumpster diving.

"Listen, I gotta tell you, when I had a shift in thinking was when you brought your beautiful friend Jenny with us," recalled Tammy. "Here she is, she must be what? six feet tall and she's wearing platform shoes and tight jeans, beautiful elegant Jenny, and she wasn't the least bit shy. I think when you go with a gang of people it makes it easier, because it's a gang, plus recycling's important!"

When asked about his dumpster diving experiences, my friend Mark Freear likes to tell about the Kryptonite bike key he found in a Cal Poly dumpster. On a lark, he began trying the key on the few remaining bikes still locked up behind the nearest dorm (students had already left for the summer). On the third try voila! he scored himself a nice little ten-speed some kid just abandoned, not even bothering to unlock and discard the bike but merely tossing the key in the trash. Shocking!

Trash pickers aren't the only ones who see a boon from these students' mass exodus. According to Jim Burke, Goodwill's regional Director of Operations, the local charity sees a huge increase in donations.

"Absolutely we see a lot more," said Burke. "We started [seeing the increase] about two weeks ago. There's, of course, Cuesta College, that just got out. That was the beginning of it. The summer also marks the beginning of people taking vacation, people moving or making the decision to move it, sell it, or give it to Goodwill. This week and for the next couple of weeks we'll get pretty inundated by stuff students and others have donated."

Usually Goodwill has a donation trailer parked on Santa Rosa Street. Right now they have three, plus they have extended hours until 8 p.m.

"The idea is to try to mitigate anyone dumping stuff," said Burke. "A lot of times we get garbage dumped on us some stuff we can't sell and sometimes literally garbage."

I guess some people figure if they're donating their old TV, Goodwill wouldn't mind taking all their unusable trash along with it. For the most part, however, students tend to donate stuff that's too hard to move.

"It does tend to be desk- or workspace-oriented, sofas the things you can't easily get in your vehicle if you're moving out," noted Burke. "Pretty much anything you can imagine finding in a household has been donated to Goodwill."

All right, kids, dump away. Don't worry about it. Someone will want it!

Glen Starkey is probably sitting on that chair you threw away. Ask him if he finds it comfortable at gstarkey@newtimesslo.com.