An outspoken sculptor finds a new home in Paso Robles

# Obispo. If you don't believe that, just ask Dale Evers, the sculptor who is hosting an opening reception for his new Paso Robles-based studio May 5 and 6. In addition to having a critical view of artistic disciplines within the education system, Evers is a self-proclaimed artist-slash-capitalist who regards the business aspect of being an artist as equally important to the creative aspect. These views aren't necessarily winning him any popularity prizes, but neither do they affect his sales, which easily allow him to support himself and his family.

"Of course art includes economics and business," said Evers, who does employ people to help him manage the financial side of his work. "That bothers some people. But the business end is the business end and the art end is the art end. You've got to separate them, like church and state. It's still part of the country."

To date, Evers estimates that he has sold 18,000 bronze statues, a streak that began with his first sale of a wooden whale in 1982 at the Cambria Coast Gallery. At that point Evers was working almost exclusively with wood, sculpting the marine life that would eventually give him the hated title of 'the dolphin guy.'

"If you asked 'what is Dale Evers, other than being a major character,' many people would say 'that's the dolphin guy' because I did the dolphins at the Cayucos pier and I get so upset when people say that," Evers explained. "I'm not the freaking dolphin guy. I'm the dung beetle guy." Evers still loves the water as much as he did when he was a young surfer beginning his career. But he no longer exclusively creates dolphins, turtles, and whales.

# His studio, where he works with his son and an apprentice, is full of half-completed animals and fish. An almost-completed jellyfish lamp with a bell created by glassblower Michael Nourot rests near what appears to be the skeleton of a soon to be flying fish. These pieces will join their completed companions in the gallery one door away from the studio, in time for the opening of Nature Nouveau, the name of the new exhibit. Evers' work falls under the heading of functional art mostly lighting and tables with the occasional decorative sculpture or fountain thrown in for good measure.

"I think this is the most important art show in the history of San Luis Obispo," said Evers. "All my work has been nature-themed but this is edgier nature stuff, a little more thought- provoking. Dolphins aren't thought-provoking. They're just cute." His spacious new studio, though, still houses plenty of aquatic-themed art a deep blue marlin in one corner, a gigantic crab propping up a glass table, and a pair of sea turtles whose shells light up, but there are other inhabitants as well. A dragonfly hovers at least six feet in the air, a dung beetle carries a ball of light, and a trio of masterful, leering ravens encircles a large floor lamp. The whimsical, mad assemblage would not be misplaced in a Disney studio or ride, but Evers is adamant that Paso Robles is where his work truly belongs.

After operating a studio/ gallery in Morro Bay for 12 years, Evers made the move to Paso Robles at the tail end of 2006, lured by his anticipation of a cultural explosion in the North County.

# "San Luis Obispo is not the cultural epicenter of the county," he asserted. "North County is the cultural epicenter. The wine industry has set the stage for a more sophisticated creative climate. I see this as an area of cultural growth and that's why I'm so happy to be here." He expects his studio to feature prominently in the area's artistic awakening, particularly as a gallery space for other artists whose work complements his own style. And he's not just talking about the imposingly large indoor gallery space. Evers is transforming the outdoor space surrounding his studio into a sculpture garden, which he describes as a "miniature Burning Man," complete with fire pits and garden art-styled sculptures.

In addition to sharing his new artistic haven, Evers will be unveiling 20 new Nature Nouveau pieces, most of them created through a process of fabrication, though Evers does occasionally use bronze casts made from his clay molds. He said average pieces sell for between $15,000 and $20,000, but some have gone for north of six figures. Each project requires a different amount of time to complete. Evers' flying fish is turning out to be more time-consuming than expected. The fish's head has already been cast, but creating each individual scale is no picnic.

"I can do a major project in one week," he said. "Some projects 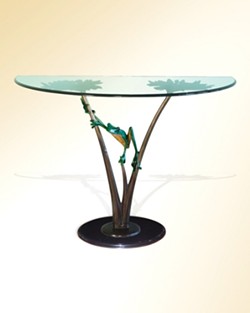 # take like a month or two but I never work on one project at a time. I work on four or five because I have ADD." As the studio's reception draws nearer, Evers is indeed a wearer of many caps. He has several sculptures to complete, an outdoor sculpture garden to organize, and visions of future uses for his North County studio. And, if all goes according to plan, his small whimsical army will grow ever smaller as his sculptures find a new home with local art collectors.

The Dale Evers Design Studio will be celebrating 25 years of local art May 5 and 6 from 10 a.m. to 9 p.m. with an artist's reception on May 5 from 6 to 9 p.m. The studio is located at 3055 Limestone Way in Paso Robles. If you're interested in dropping by the studio at another time, give the studio a call. For more information call Heidi Evers at the studio at 434-9237.