There's something for everyone to enjoy at Café Vostro

Wouldn’t it be fun to open a café? Some people would make it a temple to vegetarianism, while others would make it a wine bar, an Italian trattoria, or a gourmet burger joint. Of course, you could simply create an eclectic menu that features all your favorite foods: Mexican, Spanish, Cajun, American, and Italian. While it sounds like an unlikely formula for success, it’s working out just fine for chef and restaurateur Ken Voss of Café Vostro in Grover Beach.

The café’s name has nothing to do with his surname; literally translated from Italian, Vostro means yours, which makes it “your café.” After sitting down and talking to Voss about his menu I learned he wanted to offer all of the different cuisines he likes. Clearly, it’s appealing to his clientele in South County; regulars return weekly for breakfast, lunch, and dinner. “I wanted the menu to have all of the flavors I like to eat. But I don’t promote one type of cuisine over another,” the enthusiastic chef pointed out. “As the variety of my clientele grows, so does their taste.”

I planned lunch with a friend, Linda Lewis, coordinator of volunteers for the Central Coast Wine Classic. Arriving at 1 p.m. on Wednesday, we found the café fairly busy. A large group of firemen were having lunch together, there were people sitting on the couches (there’s a mini living room in the middle of the long dining room) enjoying free WiFi while sipping the good house coffee. That scene is more like a wine bar, according to Voss; especially on Friday and Saturday, the only nights he’s open for dinner.

It was difficult deciding what to choose from the large menu, until I saw: “the ole stand by.” And what a bargain it provided: choice of a half sandwich or half salad with a cup of soup from three choices, just $6.59. The only limitation was the half-pound Vostro burger and the steak sandwich were excluded. I chose the “PLT,” Voss’s Italian take on the BLT, made with crispy pancetta. I had my choice of bread and of mayo-blends, so I stayed with the Italian theme by choosing pesto-mayo, over chipotle mayo or garlic mayo. 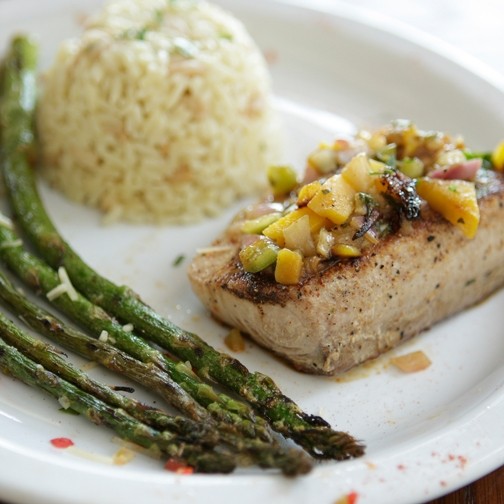 I loved the sandwich despite the server forgetting to ask which bread I preferred. My bad, too, since I had read the great list of breads available: whole wheat or white tortilla, panini, La Brea focaccia, whole-wheat bread, pita, or croissant. Trading tastes with Linda, I was impressed with her salad choice of broccoli, tomato and mozzarella dressed with a nicely balanced vinaigrette; everything was fresh and delicious. The enchilada soup was very good, loaded with chicken and black beans. Voss told me he makes his own enchilada sauce, which he adds to this soup, and it’s pretty hot from the addition of chile and cayenne spices. Linda and I agreed the spicy soup isn’t for the faint-of-palate. Voss told me it was mild compared to his preference for heat. A glass of Bell Napa Valley 2007 Sauvignon Blanc, only $6 for a generous pour, provided a refreshing, crisp contrast to the enchilada soup.

Linda suggested splitting a side of fresh potato chips, $2.69, and I was glad the moment I bit into one. Deliciously crisp, and not greasy like those I’ve been served in too many restaurants, we found them hard to resist. She suggested a light dusting of spice would improve them, but liked them nonetheless. The next day I tried breakfast for lunch: the frittata ($8.59) with Prosciutto di Parma, tomatoes, basil, and parmesan. It was satisfying but I wished I had tried some of the more creative dishes. Breakfast dishes come with potatoes, thinly sliced like the chips, nicely crusted and not greasy at all, and choice of bread. 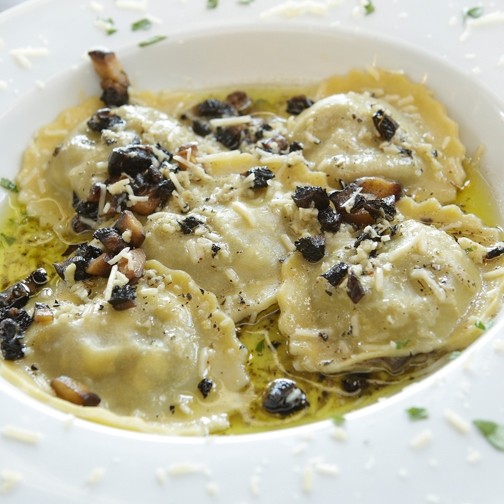 Voss sat down to talk during my second visit. He explained that at the early age of 55 he retired from consumer lending. Admitting he’d held that job 29 years, he chuckled: “During the last three or four years I couldn’t wait to retire.” Before finding the Grover Beach location, where he lives, he said he considered opening a coffee shop in Pismo Beach or SLO, something half the size of his large location for Café Vostro. “I’ve been preparing for this the last 10 years. I’ve got 300 recipes I’ve collected, and I still pull them out to make specials.”

Dianna Voss, Ken’s wife, helped him find the location and helps at the café when he caters large events. The café can accommodate a party of 60. But she still maintains her day job as an escrow officer. At first the café served only breakfast and lunch, every day except Monday. Their success motivated them to offer dinner, but only on Friday and Saturday nights. Voss said he only serves certified Angus beef, and serves boneless chicken breast that’s cooked to order. “We’re not trying to compete with the barbecue places,” Voss said. “I created a secret spice blend I put on everything so people get a taste for my food.”

Voss told me his taco salad is very popular but the grilled salmon salad is his most popular lunch dish. He noted the wild Alaskan Coho salmon served at lunch is the same cut and quality you’ll get at dinner. Although he’s not a culinary school graduate, he cooked professionally at age 18, when he learned line and grill cooking for two years.

“We try to make everything ourselves and I buy quality ingredients, as fresh as I can get,” Voss explained. “I use one food distributor for 70 percent of my purchases because he’s dependable and always gives me the quality I expect. Customers can tell the difference,” he smiled, “I’m getting that kind of clientele.”

“I tell my guys, ‘Never serve what you wouldn’t eat yourself: if the lettuce is wilted or the tomatoes are mushy, don’t put them on the plate.’” Although you’ll often see Voss in the dining room talking to guests, he told me he’s usually cooking and overseeing everything his crew prepares. “I can’t stay out of the kitchen, even if it’s to make a simple sandwich,” Voss finished. “I love doing this.”