After 10 years, The Insomniac is shutting its doors

So we come to the end at last. As anyone who has read my “Blast From the Past” movie column for Insomniac Video knows, I’m not usually one who lacks for words. But I sit here at my computer, and I simply don’t know what to say. I knew one day The Insomniac would end, both in a Zen “all things must pass” sort of way and in the literal sense. I knew the past two years have been really tough, but still I can’t believe it. So I look around my room, and staring back at me I see my wallpaper: a mural with The Dude, One of The Furies from The Warriors, Alex De Large, Frank Booth and Frank Bunny, Ed Wood, Divine, and countless others. I look around my room at the posters that line my wall, at the obscene number of books, movies, and comics I’ve crammed into my small apartment. I look at these and I wonder if they would be here without The Insomniac. The question, “Would I have a lot of neat stuff?” may seem shallow to you but anyone who loves what they love, I mean really loves it, knows that it’s not. But let me pose an alternative one, “Would I be here without The Insomniac?” I’m not so sure.

Let’s start with the first question, and let’s get something straight: Knowing what you should see really doesn’t matter unless you can see it. Now, with Netflix, if you want to bone up on your Finnish animation about leopards, the entire genre is just a button click away. But that wasn’t always so. You either had a chain like Blockbuster that censored their movies, liquated their backstock, and whose foreign and classics sections filled half a shelf if you were lucky or you had an independent mom-and-pop shop run by people who rented videos as a simple business plan, with no more passion than someone who sold carburetors, and no more understanding. 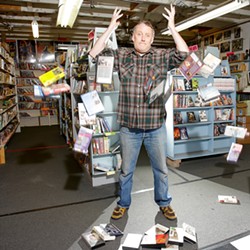 Sure, it was easy enough to find Stagecoach or The Searchers, but The Insomniac let you bask in all of their films—good or bad, major or minor—let you truly see their careers as singular works of art. When you walked into The Insomniac, that cramped little space with mildew-stained rugs and cinderblock walls, it was magical. The store spoke to you, it offered film as an infinite buffet where many were happy to take whatever crap was shoveled at them and the canny ones could create a fantastic meal for themselves by digging a bit deeper.

But that wasn’t all The Insomniac was, not to me anyway. When I discovered The Insomniac, I was a lonely, disaffected misfit—basically friendless and very, very lost. People have bandied about the word “alternative” to the point that it’s now basically meaningless, but the fact is, alternative exists because there are some people who desperately need that alternative. Not because they want to rebel, or be shocking or whatever teenage bullshit usually gets tossed around, but because that’s just how they are. They don’t see a place for themselves. They have to make one.

The Insomniac gave me that alternative, told me I wasn’t alone, taught me that “different” didn’t mean “bad,” it just meant different. Suddenly a whole new world opened up for me and the influence it had on me can’t be calculated. The experience is the reason I write these columns, the reason I bang my head against the wall trying to make movies. It’s not because I’m hubristic enough to think that I’m so great that everyone should listen to me. It’s because I have to put it out there, this secret handshake to others, to try and let them know they’re not alone, even if it’s as simple as, “Hey, I like the same stuff as you.” It’s important. I’m living proof. The Insomniac Video didn’t just give me movies, it gave me hope.

Freelancer Bryce Wilson will continue to write “Blast From the Past,” but now if you want to see the movies he’s writing about, you’re going to have to search a little harder.