The end of the future

See Daniel Dove's abstracted visions of the future at SLOMA

I’m sorry to be the one to tell you this, but the future happened already. You missed it. It was super awesome, with streamlined cars, chic furniture, and bold, optimistic public sculptures. But now it’s done, and there’s nothing left to do but sweep up the wreckage, assess the devastation. 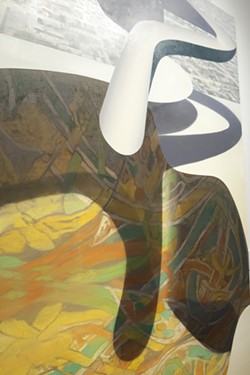 There are no people in Daniel Dove’s exhibit “Remains of the Future,” a series of large-scale paintings hanging at the San Luis Obispo Museum of Art. You, the viewer, are the exception, scanning your empty empire: a land scarred by roads leading nowhere and littered with the debris of progress and innovation.

A dilapidated billboard in Dove’s 69 AMX advertises a late-’60s sports car, though it takes several moments to realize that’s what you’re looking at. At first glance, the work feels abstract, as the eye struggles to separate the crumbling image of the car from the skeleton of the billboard and the hazy sky beyond. Stand too close, and these elements dissolve into an arbitrary amalgam of shape and texture. Take a few steps back, and the billboard’s message falls into place. Beneath it, a purple sunset glimmers over a city where precious few lights are burning.

Vanishing Point, a work depicting the wrecked fuselage of a commercial airplane, contains similar elements. The image as a whole is difficult to decipher from the textures that comprise it. It feels like a totally realist painting, yet its impossible symmetry again suggests abstraction: Lines on the floor and throughout the rusty body of the plane lead inexorably toward a central focus; the vanishing point in the work’s title found not on the horizon line but within the explosion of an optimistic past.

Building on this idea is Eviction, which depicts a discarded pile of mod ’60s furniture. The work’s title suggests at least two people present in this abandoned world—the evictor and the evictee—yet there’s not a soul to be seen. The brightly colored objects, so thoroughly realized in the foreground (swivel chairs, a streamlined-looking table) fade to abstracted pastel shapes in the background. Like the furniture, these shapes are a reference to Modernist art and design in a work that simultaneously scoffs at the movement’s simplistic idealism. After all, how can a single period be called Modern? What can possibly happen after Modernism? Or was Modernism supposed to be the end of history, of progress in general? 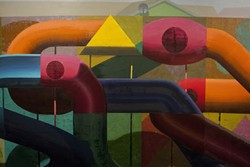 Yes, Eviction seems to say, with a kind of playful flippancy. This is what happened after Modernism. Civilization basically slowed to a halt, and humanity was left with this pile of fragments from the previous era’s innovations: the remains of the future.

Such icons of mid-century optimism are repeatedly appropriated throughout the exhibit. “Postmodern” is a vague and totally contradictory term, but it captures “Remains of the Future” perfectly: an era defined by the previous era’s achievements, generations born into anticlimax.

Trixter, named for the tagger whose moniker graces the dilapidated building in the work’s background, depicts what in the ’60s must have been a daringly modern work of public art. Now, the sculpture, with its peeling, cakey paint—Dove proves again a master of depicting textures—is the only thing left standing in a scene of decay and neglect. Beyond, over an extremely high wall—of the kind that separate the freeway from a residential district, and are often painted over to conceal their hulking, unfriendly utility—can be seen the rooftops of a few distant houses.

Dove, a Cal Poly associate professor who teaches a course in studio art, holds an MFA from Yale. But his first foray into higher education was as a chemistry major, in pursuit of, he says, “that idea that science would bring you in touch with that Truth with a capital T.”

But an undergraduate art history course opened his mind to the idea that art could possess the same truth-seeking power. Plus, it didn’t involve any lab work. Despite initial reservations about how exactly one makes a living as artist, Dove switched majors. Influenced by the old masters—Cezanne, Rembrandt, Vermeer—as well as by more contemporary painters such as Lucian Freud and Edward Hopper, Dove’s style is grounded in realism. And yet, it seems, he can’t quite leave it at that. “Remains of the Future” is fascinating because of the subtle ways in which reality is warped, making for uncanny and strangely threatening scenes.

It’s frustratingly unclear if the colorful, tubular structure in Precita Playscape stands on its own or is part of the mural behind it; the shapes of both align a bit too perfectly. The structure—bright, bold, and gleaming—sits in front of an ominously high wall boasting large, manufactured-looking patterns, like when fast food restaurants try to make their décor look arty. In some places, the play structure is its own entity. But in other places, it flattens, impossibly, into the mural behind it. Over the wall, we again barely glimpse the softer shapes of a rooftop and a tiny satellite dish.

Dove’s Lindisfarne flirts again with abstraction, but never quite leaves the realm of plausibility. The effect is unsettling. An empty pool, covered in amorphous patterns like graffiti, appears cavernous and foreboding. Its manmade curves might just as easily suggest an abandoned skate park. A tube-like silver object (a slide?) snakes into the empty cavern. Beyond its great maw, we glimpse the grid of a grayscale city, like a distant memory of a modern age.

Arts Editor Anna Weltner wonders when the past will begin. Contact her at aweltner@newtimesslo.com.