The eye of the hurricane

Disenfranchised by a recent bill, the most famous CSD in local history faces a potentially powerless future

In the world of community representation, the body overlooking the quiet coastal settlement of Los Osos has enjoyed headliner status for nearly 30 years. 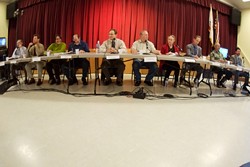 # Thanks to regiments of hard-lining citizens opining, the Regional Water Quality Control Board fining, and the perpetually dynamic status of the contentious sewer project strafing forward and back with every changing of the guard, the skirmishes of this bedroom community have always garnered top billing in the local media.

After eight years, the little prizefighter that couldn't finally seems destined for the sunset. What now? Peace in the Middle East?

Passed in 1996, Proposition 218 entitles Los Osos ratepayers to a vote before the county can levy any assessments. Without financing, the project would once again founder and perhaps land back in the lap of yet another, probably restructured, CSD board. Charged up by statements earlier that day from county Public Works Director Noel King, indicating that the county would likely pursue a controversial gravity collection system, distrust lingered like a fog over the room.

"We can no longer afford to have people make promises and then let us down," candidate Barrow commented. "We do not have an affordable solution with the county."

Several CSD candidates from both sides of the traditional Los Osos aisle capitalized on the climate.

"A decision-making CSD board can do it the fastest," commented candidate Jeff Edwards.

Edwards, a contender for one of the two spots defended by incumbents Chuck Cesena and Steve Senet, recently introduced another alternative sewer model, which would place the waste-treatment site in a canyon presently sheltering an equestrian farm.

Edwards claimed that his proposed solution still in the infant stages of public scrutiny would directly recharge the depleted lower aquifer and reach operational status by the end of 2010.

A preexisting alternative proposal by Central Valley engineering firm Ripley Pacific promised to achieve the same result simply by removing the strain on the aquifer caused by the irrigation needs of nearby farms. That plan would use state-of-the-art UV processing to generate a nitrate-rich outfall distributed to croplands outside the basin.

Ripley Pacific principal Dana Ripley argued that, to meet state Department of Health and Human Services standards for potable water, wastewater must run through the costly process of reverse osmosis.

"A lot of people want to neglect these issues," Ripley said. "But it would be a lot more expensive to make it potable probably double the price."

"They're operating under the premise that you can't get a discharge permit at the creek," Edwards responded. "I can't accept that."

Ripley Pacific engineer Bahman Sheikh, in his site analysis this past spring, ranked Edwards' proposed location for the treatment facility seventh out of nine studied candidates. The property received a low score in availability when, according to Sheikh, one of the owners cancelled the pre-scheduled meeting and chased the researcher and his team off the property on horseback.

"The response was not friendly, to put it mildly," he said.

"It would be fair to characterize their position as less-than-willing," Edwards admitted. "But this issue is bigger than one couple. It is the ideal site."

Regardless, before getting too deep in project specifics, Edwards and his supporters must first overtake the current CSD, a group enamored with the Ripley Pacific plan. To that end, he and other candidates generally favoring the policies of the board recalled last November attacked the current public face of the CSD for its alleged frequent fiscal missteps.

"Leadership is particularly absent from our current board," said Edwards, who went on to dismiss the Ripley Pacific plan as a waste of time and resources.

Opponents' grievances so thoroughly highlighted at a recent meeting of the Local Agency Formation Commission (LAFCO) analyzing the possible dissolution of the CSD featured the charge that the sitting board steered the agency into a tar pit of liability. Edwards asserted that a right-thinking CSD could still hammer out a sewer solution faster than the county could.

"I wish they would attend more board meetings instead of relying on the recalled directors for information," CSD president Lisa Schicker said. "I encourage them to talk to us about these issues."

However, other critics of the CSD board seemed more than happy to just let public works take the reigns.

"We just need to turn over our assets intact," candidate Lynette Tornatzky said, referring to suspicions that the CSD might be plotting to sell the centrally located Tri-W, thereby removing that controversial option from the county's quiver.

Last week, Public Works named Deputy Director Paavo Ogren head of the project and officially earmarked a previously allotted $2 million to start the process of analyzing engineering solutions. Ogren laid out an action plan that, among other things, would review site options and explore the possibility of acquiring drainage permits.

The $2 million sum, fronted by the county, would be refunded through Proposition 218-appoved assessments. But lingering distrust toward the county, manifested in a possible 218 misfire, could just as easily cause public works' confidence in the Los Osos ratepayers to fail killing the project once again.

To further complicate matters, some insiders stated that an administrative fee tacked on by the county perhaps as high as 17 percent might catch enough Ososites off-guard to derail the 218 vote. Ogren was unavailable to clarify what exact percentage Public Works planned to seek, but law requires those specifics be present in the ballot language.

"I think the voters will be surprised," Schicker said.