Three years ago, Todd and Korie Newman loaded up their recreational vehicle, “Marvey the RV,” and drove their kids, Rohn and Acacia, to the Live Oak Music Festival for the very first time.

“We always had a concert or two or three of our own that weekend,” Korie explained. 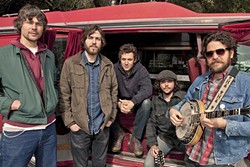 They’d wanted to go for years, but when they were running SLO Brew they were always busy, and since starting their concert promotion company Good Medicine Presents, they’ve been even busier.

“KCBX invited us three years ago,” Todd said, and the family finally decided to set aside the time and go. They loved it!

“It was our first big music festival since we started a family,” Todd said. “Acacia was just 1 year old.”

The Newmans love music and attended big festivals like Hardly Strictly Bluegrass and the New Orleans Jazz Festival before starting a family, but Live Oak is particularly kid friendly.

Families feel like their kids are safe there, and the festival goes out of its way to provide kids’ activities from craft workshops to events like kids’ yoga. The kids’ talent show held Sunday afternoon is a particular favorite, and there are performers adept at entertaining kids, including jugglers and storytellers.

After that first year, KCBX asked the Newmans if they’d be interested in helping book the teen concerts last year, which they did, bringing in popular local acts like The Kicks, the Shawn Clark Family Band, The Kenny Taylor Band, and Santa Barbara band The Olés.

This year the Newmans booked the whole festival, tapping into their vast network of connections, and many are calling it the best lineup in years. Usually each day of the festival contains one big-name performer, but this year, each day has several! The Brothers Comatose, Nick Waterhouse, and Jackie Greene play on Friday. Joe Craven & The Sometimers, Jessica Fichot, Lee Fields and the Expressions, Ozomatli, and Rey Fresco play Saturday. Birds of Chicago, Paul Thorn, and Donavon Frankenreiter play Sunday. It’s pretty epic!

“Booking festivals is different,” Todd explained. “In general, festivals offer the highest paychecks for performers, but Live Oak is a fundraiser and isn’t really the economic engine that other festivals are, and during the festival season cycle, there’s more and more competition.” 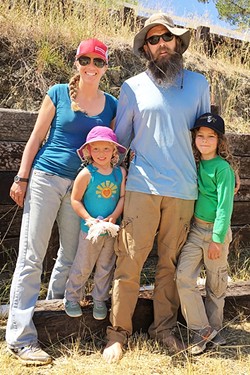 The goal is to attract the best artists you can afford. Because of the tight budget, the Newmans had to sell performers on the vibe of the festival, playing up its atmosphere, talking about how well it treats its performers backstage.

“Backstage is super cool and the festival is not overwhelming and not pretentious,” Todd said. “We’ve worked with some of these bands for 12 years, so we have relationships. When I was booking, all the bands knew what Live Oak was.”

“One of the selling points is the community feel,” Korie added. “Last year, for instance, we invited The T-Sisters and the California Honey Drops to camp with us.”

Where else do festivalgoers get such amazing access to performers, who frequently wander the camp jamming with other campers?

“It was fun to talk to The Brothers Comatose about it because they told us they always wanted to play Live Oak,” Korie said, “but they didn’t want to just play; they wanted the whole experience.”

This year the Newmans organized an artists’ camp where a lot of the performers could camp together.

“Live Oak has conviction and heritage. It’s a pretty deep culture,” Todd continued. “We wanted to remain loyal to that, to stay true to the community they foster. We tried to pick bands we felt would resonate with the community and that would appeal to the various demographics that attend Live Oak. I have to say, it’s not an easy algorithm to master but [KCBX Director of Programming] Marisa Waddell and [KCBX Music Director] Neal Losey were there every step of the way.”

The music is great but the most remarkable thing about Live Oak in the community.

“This is a story a lot of parents have, but it’s still pretty huge to us. Last year at Live Oak was the first time Rohn took off on his own. He was 5 years old, and he rode off on his bike with a friend,” Todd said.

“We don’t live in a neighborhood,” Korie said. “So that’s not something he gets to do, but he truly felt ready and confident.”

It’s a memory Rohn will never forget either.

“My favorite thing was bike riding,” Rohn said. “I really like it! I just rode on the roads. There were lots of kids riding their bikes. I also ate doughnuts, and I played tetherball with another kid in the kids’ area.”

“I like riding a bike too,” Acacia chimed in. “I can do a pedal bike!”

Senior Staff Writer Glen Starkey has been a dedicated Live Oak Music Festival goer since 2010. Contact him at gstarkey@newtimesslo.com.