Troll others' misfortunes from the convenience of a luxury motorcoach

As the coffee-clutching, would-be investors climbed aboard the rust-colored motorcoach for their foreclosure tour one recent Saturday morning, it quickly became clear there would be ample seats to spare.

The plush "Silverado" bus sat 48, but it was only about a third full--and that counted the half-dozen agents, appraisers, and financing experts who joined the tour to answer questions from tour-goers and attempt to pump up a little business in these dry times.

The many vacant seats existed even though this tour was featured on Good Morning America a month prior and even though it had recently earned its host an interview with Fox News' Neal Cavuto.

With agents going out of business and foreclosures at a decades-old high, this particular foreclosure tour--now a national phenomenon--represents a novel, if some might say slightly morbid, attempt by one local agency to make money off the collapse of the real estate and lending markets. Here's what it was like on a recent tour. 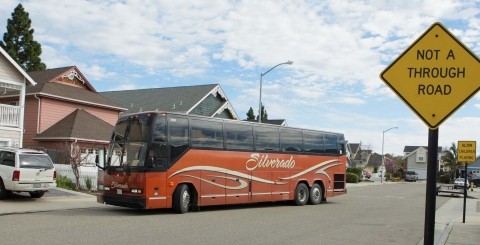 The tour's host was Dick Keenan, an ingratiating guy whose wavy silver-streaked black hair and compact frame remind one of an aging teen heartthrob, like maybe he could have been on the cover of Tiger Beat in the '80s.

A little defensive about the low turnout, Keenan noted that many folks backed out at the last minute, citing the flu and the potential for rain that day.

It's just as likely, my silver-haired seatmate mumbled under his breath in response, that folks were hoping that more homes on the tour would be in the 5 Cities area. Although the tour left from Keenan's office in Pismo Beach, the bulk of the homes turned out to be in the Santa Maria area where, we were all told, prices have plunged as much as 30 percent since their peak and foreclosures have soared to the point that 44 percent of homes on the market are being offered for less than their mortgages are worth.

As the tour began, Keenan worked hard to emphasize the fact that this tour wasn't designed to prey on the misfortunes of those who have lost their homes.

"The reality is we have no clue at all as to the stories behind each of the houses we're dealing with on the tour," he announced to the bus.

In fact, most of the houses on the tour were bank-owned, many of which are eager or, in his words, "aggressive," about getting them off their books.

Still, that didn't mean the tour was completely free of the scent of opportunism.

With that happy thought in mind, we all climbed off the bus to look at, gawk at, and gossip about yet another house that used to be somebody's home.

With wardrobes that ranged from T-shirts and sweats to sportcoats and cowboy boots, the folks on the tour seemed mostly to fall into the looky-lou category, willing to spend a morning and $20 to learn more about foreclosures, but not necessarily looking to build real estate empires.

Several said they were just there to see how good the real estate deals have gotten.

"I didn't know how much you could save on a foreclosure," Dave Hetherwick of Nipomo said of the reason he took the tour. "I wanted to find out."

Lynn Feka of Nipomo said she read something about the tour in a local paper and got curious.

And the truth is, it was fun to peek at the houses and gossip about the horrifying toilet that marred everything else in a mostly normal house. Think Trainspotting. Was it used to cook meth in?

A fair spritzing of schadenfreude--joy found in the suffering of others--wafted over the Silverado as well, especially when Keenan pointed out that many of the houses "were used as personal ATMs" through a series of refinancings that drove their mortgages beyond their actual worth when the market turned.

These people, in other words, may have deserved whatever fate they met that resulted in their house being on the tour.

After four previous tours, Keenan said that he had sold "a couple" of homes that were featured. That's not a rocketing success rate, but more are planned.

And Keenan noted that in an economy where plenty of real estate agents are going out of business, chartering a bus in search of clients and sales is a lot better than sitting around twiddling one's thumbs.

Keenan was keen on real estate cliche s, and he dispensed them liberally on the tour. Among them:

"We strongly believe real estate is a way of creating wealth."

"The trough is the opportunity where you're going to be wanting to buy."

"We're working with banks to try to unload their excess inventory."

I'll just note this little detail: Over the urinal in his office's men's room, at eye level, was posted this notice: "Lead with listings."

In theory, the tour homes were self-selected by random chance they were the homes of folks who just hit hard times, or got sold too much house for their incomes. They could be your neighbors. And, of course, they were somebody's neighbors.

In practice, though, there seemed something just a little off about most of the homes on the tour. They were next to vacant lots, or had unusual layouts, or were dominated by really imposing fireplaces.

A far higher number than you'd expect seemed to embrace a gingerbread or Dutch motif. One had a massive happy face painted on a counter inside.

Keenan said that much of what I noticed was just the look of an unlived-in house, but I was unconvinced.

More likely, it seemed, the houses were on the tour because they were the ones that have made it through the entire lengthy foreclosure process--including an auction on the courthouse steps--without someone else swooping in and scooping them up.

In Keenan's pitch, that was good news for investors because they'd now get a chance to buy them through an agent who could walk newbies through the process and investigate the histories of the homes before a sale is final.

The first house on the tour was way up in Pismo Beach's Pismo Heights area--the kind of neighborhood where the houses feature that ubiquitous jumping dolphin statue.

Inside the house, the first thing I noticed was a fireplace that looked like Darth Vader's mask. The house has been partially remodeled in a Euro-mod style and the kitchen window had a full-frontal view of a shed. But still, there was a bonus room upstairs--it had no bathroom or closet so they couldn't call it a bedroom--that had a decent view of the ocean. And at $662,000, the agents seemed to be working to plant seeds for a sale--saying things like "it's exciting" and "what a find"--as people walked past them. I asked my seatmate, an appraiser, if that house was a bargain, and he just wrinkled up his face: "Not at that price."

The next stop was at a two-bedroom, one-bathroom cottage in Oceano. It looked like it was in good shape and they called it a "multifamily unit" but that seemed impossible because it was only 686 total square feet. I guess it was zoned so that if you rebuilt it, you could build a duplex or something.

The agent's descriptions on this utilitarian shelter included three exclamation marks and one word all in capital letters. Yet the only really impressive thing was the price. Listed at $234,900, it had to be one of the cheapest stand-alone houses in the area.

The third house on the tour was actually a little compound, two houses surrounded by a funky gate. The overall feel made me think it had been inhabited by Dutch hippies. Unlike the other places, it felt sort of happy even without anybody keeping things up--but maybe that's just because of the aforementioned enormous happy face painted on one of the counters.

After three houses, I started to lose track of the ways they differed from one another. One of them had a lot of gingerbread design stuff and a very strange layout and that toilet I mentioned. Another looked for all the world like a regular tract home but backed right up to a neighbor's horse corral.

Though Keenan had already made clear that he didn't know the back-stories of the houses on the tour, he was happy to hypothesize a bit.

Just based on the numbers, he noted that one of the gingerbread houses must have had at least $250,000 in equity pulled out of it, because the bank ended up with a mortgage that was far higher than the original purchase price.

"What happened? Why did they end up losing the house?" he wondered.

For the folks on the tour, that question is one that never gets answered.

Fortune magazine said that insurance companies are concerned that arsons are spiking because people would rather burn down their houses than go through the foreclosure process.

Nationally, a record number of houses are in foreclosure and the largest concentrations are in California and Florida.

The Mortgage Bankers Association recently said that it doesn't think we've hit the peak of foreclosures yet.

Companies have sprung up promising to walk people through the process of walking away from their homes and their obligations, scot-free, touting foreclosure as a sort of bankruptcy.

Still, the fact that people are looking for bargains on things like a foreclosure tour suggests the situation isn't as bad as it could be. The run-up of housing prices in recent years may have planted the seeds for the notion of quick gains that has many still reflexively thinking they'd better lock into a house while they can, before prices shoot up again.

And, although I went into this ride wondering about the morality of people trolling others' misfortunes for the sake of their own fortunes, the massive scale of the foreclosure crisis seems to have taken a bit of the sting out of any shame associated with having a home in foreclosure. People who've lost their homes almost seem relieved to be out from under the burden.

Cheryl Burgess lives just down the street from one the first houses on the tour. She's also a real estate agent, a fact that she allows may color her perception of the whole affair.

While she said that she finds the concept of a Greyhound-style bus pulling up to tour distressed properties "kind of morbid," she's not opposed to the idea.

"Vacant homes aren't good for anybody," she said. "Let's get them sold."

As for the morbid idea, things could be worse a Florida company is offering similar tours of foreclosed homes, only they cruise their would-be investors around in a stretch limousine.