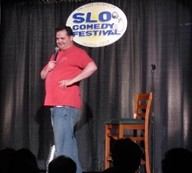 These words of wisdom tumble like jewels from the mouth of Los Angeles comedian Eric Shantz, who, by necessity of his job description, can tell you plenty of stories about rough gigs—like the one involving a woman from Cleveland, her fist, and his face.

“I was just kind of making fun of Cleveland, and she came onstage and punched me in the face. That happened,” Shantz, who originally hails from Pittsburgh, recalls in a phone interview. “So it’s a contact sport. I was basically just ripping on Cleveland, and she said, ‘If you say one more word about Cleveland, I’m coming up there and punching you in the face.’ I was like, ‘Yeah, whatever.’ So I said something else, and she came up. I thought she was just going to play it off. But she actually belted me one.”

Fortunately, other cities have been kinder. Shantz’s first gig in San Luis Obispo, for instance, went much more smoothly, he recalls. No one followed through on threats to do bodily harm. Shantz was smitten. In 2011, he founded the SLO Comedy Festival, with aspirations of creating an event that would recall the experiences he’d had performing at the much-renowned Edinburgh Comedy Festival in Scotland.

“I just fell in love with the town,” he said of San Luis Obispo. “It was just an awesome feeling up there, and I wanted to do something up there eventually. And this opportunity arose, and I figured it was a perfect fit.”

From Thursday, Feb. 27, to Sunday, March 2, the festival will bring 48 comedians from around the country to a drinking establishment near you. Creekside, Tap It, Creeky Tiki, Mother’s Tavern, Pappy McGregor’s, Marston’s, and Spike’s are all participating venues, with a few events taking place at Steynberg Gallery and Mee Heng Lo Noodle House as well. Festival director Shantz has worked it out so that the later the show starts, the dirtier the comedy gets, starting out with some fairly safe material (he dubs it PG-13) at 5 p.m., and getting progressively filthier once the prudes have been neatly tucked into bed.

The performers range from singing duo T&A (Trish and Alex!) who belt kiddie-style songs with grown-up snark (they’re available for “birthday parties, bat mitzvahs, church camps, and sleepovers,” according to their bio) to the outstanding Lamont Ferguson, whose funny-but-serious takedown of the phrase “the n-word” will make you rethink your ideas of political correctness. Festival newcomer Jay London, seen on Last Comic Standing, Leno, and King of Queens, will bring his absurd, one-liner-prone comedic style (“It’s like an old Vaudevillian type of thing,” says Shantz) to several events throughout the weekend.

After kicking off on Thursday with “Tap the Funny,” at Tap It Brewing, “Pure Stand Up” at Steynberg Gallery, and a free kickoff party at Pappy McGregor’s, the weekend moves into high gear with one show after the other on Friday and Saturday nights, followed by a “Best of the Fest” evening on Saturday at the Fremont Theatre and a free karaoke wrap party afterwards at MoTav.

Featured programs include “90 Minute Abs” (“If you are not 100 percent completely satisfied with the first 90 minutes, we’ll throw in an extra minute of comedy absolutely free!”) and “Only the Nasty Survive,” an evening of “comedy served raw” featuring folks like the fearless Jessica Singeton, former NYC transportation cop and current funny person John DiResta, and Shantz himself. A “Battle of the Sexes” show pits guys like Kris Rubio (who delivers a blend of stand-up and musical comedy) against talented ladies like Kat Radley (who mines her day job as a high school teacher for comedic gold) and Zabrina Chevannes (a Canadian who does a spot-on impression of her Jamaican dad).

Then there’s the infamous, late-night “Poisoned” show, held at Spike’s Pub, where drunkenness is a prerequisite to performance: Comics literally have to be wasted to go onstage. Shantz says he never records the event, which has become an audience favorite.

“I don’t want to kill someone’s career in a matter of five minutes,” he laughs. “A lot of the audience goes to see the comedians kind of screw up the jokes, because they’ve been to their shows, and they’ve watched comedians do great performances all weekend, and they go to the ‘Poisoned’ show—one guy, he did a beautiful setup and just forgot what he was talking about in the middle of it, looked at the audience after 30 seconds, and said, ‘Good night, folks, that’s my time!’ He got a rip-roaring ovation for that.”