The freedom to forget

The true meaning of Memorial Day slipped by 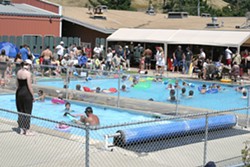 I’m riding past the graveyard on my way to the Elks Lodge to meet some friends for a swim—the perfect opener to a fun-filled summer. It’s Monday, May 31, Memorial Day, and as I look to my left, small American flags are planted next to headstones presumably belonging to fallen soldiers. I make a mental note to be sure to get a photo of the flag-strewn cemetery on my way back, but for now I’m eager to get to the pool—it’s almost 2 p.m., after all.

When I walk into the pool, it’s just as my friend Keith Bond had described it: “It looks like a plane crash, bodies everywhere, with people picking their way through chaos in search of loved ones.” Seriously. It’s packed! Bodies are stacked akimbo, colorful towels making a patchwork of the lawn.

Children shriek with joy, splashing in the pool, running through the grassy playground, swinging, climbing, and tumbling. It feels like summer, with parents diligently rubbing suntan lotion on the little ones while a half dozen Elks man the grill, turning out burgers and hotdogs for families at play.

Every chaise lounge, every chair is filled. Coyle the bartender is feeding drinks through the bar’s window. People chat amiably, many reconnecting for the first time since last summer.

The Elks Lodge is a proud supporter of veterans and a highly patriotic organization. It flies a massive American flag day and night, the red and white stripes frayed by the wind. As an added reminder that today is Memorial Day, another smaller American flag flaps from a towering Bunyon Bros. bucket crane set up in the parking lot. Scenes like this—the flags, fellowship of families, good clean recreation—warm the heart and remind us how lucky we are to be Americans.

I find my friends and as I settle in, Keith tells me how he woke up and turned on the news this morning and watched a time-lapse sequence recorded at Arlington National Cemetery. A smartly dressed soldier walked up to a headstone, saluted sharply, then stood at attention … for an hour. All around him people came and went, leaving flowers, reading tombstones, scurrying about in that time-lapse way, but this soldier … Did. Not. Move. He stood perfectly still, like a statue: upright, vigil, in silent memorial. Meanwhile, Vice President Joe Biden, who was visiting Arlington, noticed him and stood over to the side, clearly impressed by this soldier’s commitment. After the hour had passed, the soldier once again crisply saluted the headstone, turned, saw the Vice President and saluted him, then turned again on his heel and marched off, his duty complete.

I have to admit, I choked up at this story. Who was the person buried there? Who was this anonymous soldier who felt compelled to honor the dead in his silent, reverent way?

“Maybe it was his dad or his brother,” says Keith.

“Or maybe it was the guy who saved his life in battle,” I venture.

Memorial Day was originally enacted to honor Union soldiers who died in the Civil War, but after World War I it was expanded to honor all soldiers who died while in service. I am sitting on a beach towel, sipping a beer, enjoying the 80-degree weather. Had I thought about the men and women who died to allow me this privilege? Did I stop to read some of the names on those stones across the street, with the little flags planted next to them?

As we wrap up our afternoon’s recreation and say our goodbyes, I head over to the cemetery. It’s about 5 p.m., and the flags have already been removed. On the other side of the country, a soldier stood at attention for an hour, but I was in too much of a hurry to get to the pool. ∆