Written and directed by Wes Anderson (Rushmore, The Royal Tenenbaums, Moonrise Kingdom) based on a story by Roman Coppola and Hugo Guinness, The French Dispatch offers three main interconnected plots about The French Dispatch Magazine, a publication from the fictional French city of Ennui-sur-Blasé. (108 min.) 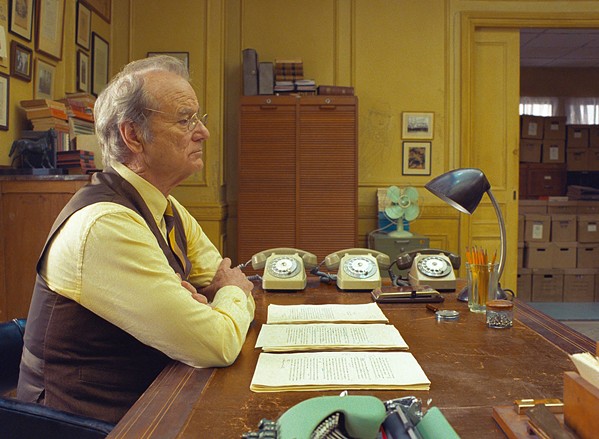 Glen Essentially a satirical homage to the early years of The New Yorker magazine and some of its most storied writers (A.J. Liebling, James Thurber, Joseph Mitchell, James Baldwin, and Rosamond Bernier), The French Dispatch is as quirky, endearing, and engaging as all of Anderson's work. By now, you probably know if you love Anderson or not, and if not, there's no point in seeing this film if you've yet to be hooked by the likes of The Life Aquatic with Steve Zissou, The Darjeeling Limited, or The Grand Budapest Hotel—not to mention his two forays into stop-motion animation, Fantastic Mr. Fox and Isle of Dogs. You're either a fan of Anderson's carefully created tableaus—sets that seem more suited to theater productions than film, color schemes and set decorations so curated as to feel like miniatures, perfectly rendered characters simultaneously deeply familiar and utterly queer—or you're not. I'm a massive Anderson fan. There's not a one of his films I'm not ready to re-watch whenever the opportunity arises, this new one included. In fact, I could probably watch this film three times today and still not fully absorb all the little references he's packed into it. It helps that Anderson has an amazing cast of actors who stick with him film after film. Bill Murray, Willem Dafoe, Tilda Swinton, Edward Norton, Frances McDormand, Adrien Brody, Jason Schwartzman, Owen Wilson, and Anjelica Huston (this film's narrator) are regulars in his productions—familiar faces (and voices) I love to see (and hear). This is yet another wonderfully odd Anderson film.

Anna The guy certainly has a style, and as both of us are big fans, it's always exciting to hear another Anderson flick is coming out. As you said, this follows his usual direction in style and storyline—one thing I love about this director is how he takes seemingly insignificant and small stories and creates an entire film around weaving them together. A lot of that is down to the characters and the wonderful cast he always manages to assemble. You have to bet these films are a ton of fun to work on with the big names he manages to pull every time. In "The Concrete Masterpiece," Benicio del Toro is Moses, an incarcerated murderer who becomes the art world's new "it guy" with his abstract paintings of his muse (and guard) Simone (Léa Seydoux). Tilda Swinton is J.K.L. Berensen, who is giving a lecture on Moses' rise in the art scene—and her part is perfectly delivered even with a mouthful of prosthetic teeth that produce a whole different character to her voice. There is a bunch of smaller stories here, yet Anderson manages to keep all of his characters from getting lost. I imagine there's a faction of people who just aren't fans of his arthouse style, though I can't imagine why. I find it absolutely charming.

Glen The other two main stories—"Revisions to a Manifesto," about a student uprising, and "The Private Dining Room of the Police Commissioner," about a dinner interrupted by a kidnapping—are equally captivating (pun intended!), as is the smaller story "The Cycling Reporter" about Herbsaint Sazerac's (Owen Wilson) cycling tour of the town of Ennui, but it's all tied together by the death of the magazine's publisher, Arthur Howitzer Jr. (Murray), whose last will and testament directs that upon his death, The French Dispatch Magazine be terminated save for one farewell issue containing three articles from previous issues as well as Howitzer's obituary. The film is essentially that issue—a sendoff to old-school journalism and journalists. I loved it.

Anna It's definitely going to appeal to those in the journalism biz! While visually very neat and tidy and with superior storytelling abilities, Anderson stays away from pretension and so do his actors. He can create something fascinating by first setting the mood. As you said, his sets are much more theater production style than something created for film, and that in itself puts the audience in a different state of mind. While he plays the head honcho, Murray's part isn't big here, but as always he plays it so coolly and with perfect finesse, and he's in good company with his cast-mates. Something tells me this group is one that takes roles for the character, not the paycheck—something that can be hard to find in Hollywood. I hope Mr. Anderson keeps at it for as long as he can. While I do prefer some of his films over others, I truly do like them all. Like you, any time I come across one, I'll watch it. Not only that, I own old-school DVDs of some that are tucked away in the closet for whenever I need a dose of his magic. This is a perfect fit for the Palm Theatre, and a film I will watch again and again. It's just fun with flair, and that's all I need sometimes. Δ