Since 2018, the Gala Pride and Diversity Center has had a goal to offer direct therapy services to its community.

Center Executive Director Michelle Call said it's always been at the top of the list, but there wasn't a clear path forward to make it happen. 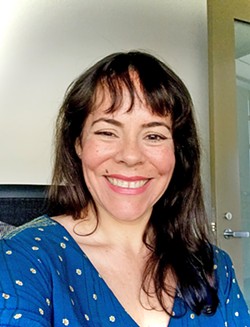 In the last three years, Call and the board of directors worked diligently to make several changes to the organization including a new name, altering the organization's bylaws, and adding new support groups for the community. Although the center has taken some goals off its list, Call said the ability to offer direct-therapy services was still in the back of her mind.

Office space in Gala's building became available around the same time Call was approached by Jean Mussen-Balsz—founder of Stoke the World, a foundation that Gala frequently partners with—to ask if Gala wanted to collaborate on a future project.

That's when Call shared the idea of Stoke the World leasing the front office and offering that space free of charge to a therapist who would provide gender-affirming services to the LGBTQ-plus community.

"We really enjoy working with Michelle, and we believe in the Gala Pride and Diversity Center's mission because it fits with our mission, which is inspiring creative change in our local community," she said.

She said the organization had donors who wanted to give back to their community and see their dollars be part of change.

"They can donate to the ACLU and Planned Parenthood and other large organizations, but they really wanted a more local tangible effect that they could actually see what their money is going to and how it is directly helping within our community," Garatoni said.

Through various donors, Stoke the World donates $1,500 a month to cover the office rent, and Gala quickly began searching for a qualified candidate to serve the community.

After a long process, Call said the board decided on Rocio Anaya, a bilingual therapist with a background in working with clients on domestic violence, sexual assault, children with mental illness, and drug and alcohol services in communities in Orange County and on the Central Coast.

"On the macro level and micro level with institutions and with individuals. It's also someone that's connected with the resources that they need to provide a validating space for them to come in and receive therapy and someone that's supportive of their journey," Anaya said.

Through her education and studies on gender-affirming therapy, Anaya said she found that there aren't many therapists who are trained to serve the LGBTQ-plus population in general, and there was a gap in San Luis Obispo that she was ready to fill.

To make a telehealth appointment for gender-affirming therapy with Anaya or to find out more, call (805) 541-4252 or email therapist@galacc.org.

• Ralphs needs to fill positions at two of its SLO County locations—San Luis Obispo and Los Osos. Open positions include courtesy clerks, service deli, meat/seafood, bakery, general merchandise, and pharmacy associates. Ralphs offers wages starting at more than $15 an hour and cost-effective medical benefits. The company also has programs such as Feed Your Future, a continuing education benefit that offers each associate up to $3,500 annually to complete a GED, obtain a college degree, or earn a certification/license. Apply online for available positions at jobs.ralphs.com. Δ