The Garifuna people, mostly native to Belize, are generally believed to be the descendents of shipwrecked African slaves. After escaping from a sinking ship, these fugitive slaves settled in the Caribbean town of St. Vincent. Over time, their culture blended with that of the local Arawak Indians, resulting in a new language and culture known as Garifuna.

But in Belize, a more popular cultural history is that the St. Vincent Africans were not slaves, but explorers, even predating Columbus in discovering America. 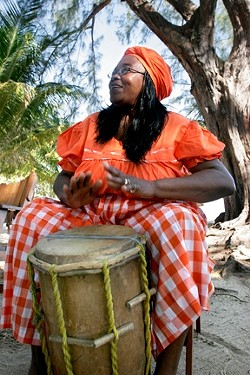 Such fearless optimism is intrinsic to a culture in which happy sounding songs tell of pain, loss, and natural disaster, and death is cause for a big party to celebrate an individual’s life. This peculiar duality must also have been what caught the interest of Belizean producer Ivan Duran. One of the first to record the original music of the Garifuna, Duran said, “One of the unique aspects of the role that music plays in the Garifuna culture is its double function.”

Duran has long been interested in Garifuna music and culture. In 1997 he began traveling to villages in Belize, Guatemala, Honduras, and Nicaragua, in search of the most beautiful female voices. The raw, natural talent he discovered is captured on the album Umalali: The Garifuna Women’s Project. Umalali is a collective of female vocalists and musicians from the Garifuna communities in the Caribbean.

The producer focused the project solely on Garifuna women because, as he noticed, the women in Garifuna culture are the main caretakers of music and tradition. It is they who create most of the songs, often describing the hard work, struggles, and joys of daily life. Ironically, it is usually the men who perform in musical groups.

In the manner of true folk artists, the Garifuna women don’t separate work from music making. “Me;rua,” the second track on the album, is a traditional Garifuna work song, meant to be sung “a cappella and in unison while pulling a canoe, putting a thatch roof on a house, or grating a cassava root to make cassava bread,” according to Duran’s liner notes.

Other compositions chronicle historical events. “Hattie,” for example, is a jewel of a song: a first-hand account of the destruction brought to the Caribbean by Hurricane Hattie in 1961. “Earth has been answered. Let us repent for we are all going/ to perish,” it laments. “… At daybreak, sadness covered the land/ We just stood around/ Where are our homes? Hattie has washed them away.”

Though cultural preservation is one of the goals of Ivan Duran’s project, he’s not an anthropologist. The Garifuna sound has been updated, tweaked, and tightened according to Duran’s fancy. The rich vocals on Umalali, mesmerizing on their own, are dressed up with blues, rock, funk, Latin, Caribbean, and African instrumentals. Rather than feeling tacked on, Duran’s style choices provide a stage to properly showcase the voices of Garifuna women.

“This is important for future generations of Garifuna, especially Garifuna women, Duran said. “One of the hopes of this project is that they can make a living through music.”

The Garifuna’s cultural legacy, once seen as something not worth passing on to future generations, is gradually being discovered by the world. Much of this is due to the efforts of the late Andy Palacio, a gifted Garifuna artist, advocate, and frequent collaborator with Duran. Because of their work, and the natural talent of Garifuna musicians, the culture has taken on the brilliance of an unearthed treasure in the eyes of the Western world.

Still, “Garifuna” is hardly a household name. But word is getting out. Belizean singer Desere Diego, Guatemalans Sofia Blanco, and daughter Silvia Baltazar Rochez—all from the Umalali album—will bring their inimitable voices to Grace Church on Aug. 30. The concert invites SLO into a strange, beautiful, and previously unheard world. As Duran says, it’ll sound familiar but also like something you’ve never heard before.

Umalali will bring African and Caribbean rhythms to San Luis Obispo on Saturday, August 30th at 8 p.m. The concert will be held at Grace Church, located on 1350 Osos Street. Tickets cost $20 and can be purchased at Boo Boo Records in San Luis Obispo. Call 541-0657.