The Gentlemen is a frenetic crime romp 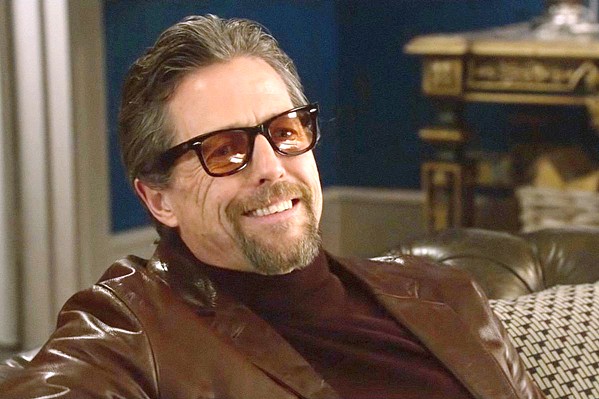 Glen If—in the face of recent Guy Ritchie films such as The Man From U.N.C.L.E., King Arthur: Legend of the Sword, and Aladdin—you're missing the chaotic joy of his earlier work such as Lock, Stock and Two Smoking Barrels; Revolver; and RocknRolla, you're in luck. Ritchie's back with another complex, character-driven, comedy-crime romp filled with whip-smart dialogue, bouts of violence, and enough complications to keep you guessing throughout. The setup features Fletcher (a terrific Hugh Grant with a decidedly more low-born accent than his usual posh Brit) explaining to Mickey's security man Raymond (Charlie Hunnam with a pretty terrible British accent) why his boss should give Fletcher 20 million pounds to bury all the dirt he dug up on Mickey, which will otherwise go to Fletcher's employer Big Dave, the tabloid publisher. As Fletcher reveals his investigation, we see through flashbacks how we got to where we are, but Fletcher is an unreliable narrator, not to mention a real sleazeball. Can he be trusted? Grant's never been more conniving! The film busies itself with laying out all the various players on the field of battle, which is basically a feeding frenzy on Mickey and his pot operation. As soon as it gets out that Mickey's trying to sell, the sharks start circling, but what all the sharks don't seem to realize is that Mickey's a shark, too, and he's the shark with the biggest bite. Entertaining, funny, violent—this is Ritchie back in early career form.

Anna Ritchie knows that this sort of over-the-top action shoot-'em-up needs a good dose of comedy to really succeed, and he doesn't fail. Grant is great as the smarmy Fletcher—just gross enough to be unlikeable but funny enough to be entertaining. Mickey is a man not to be trifled with. His business is the most important thing in the world to him except, of course, for his beautiful wife, Rosalind (Michelle Dockery). The mainstay of the film is Mickey's right-hand man Ray, who lets Fletcher walk him through the narrative of what he thinks has happened so far, as well as his big new idea for a blockbuster movie. It's a contrived storyline and you'll definitely need to suspend your disbelief, but is the movie fun? Hell yes it is! Farrell's Coach is an added delight, dressed in ridiculous tracksuits and bespectacled by huge plastic-rimmed glasses—the guy is a character. Prospective buyer Berger is an under-the-radar villain who thinks he's smarter than everyone else. Bad news, buddy. Mickey has more than a few tricks up his sleeve. Is this cinematic genius? I have to vote no, but it is a fun way to pass the time as we wait for awards season to end and summer blockbusters to begin.

Glen It's all about the outlandish characters, and Coach is definitely a standout. He takes kids off the street and teaches them to box and have self-respect, so when his group of boxers does something boneheaded—like raid one of Mickey's underground farms, film the ensuing fight, and post it on social media—Coach has to step in and make things right. Farrell is great in the role, playing Coach as a stand-up guy who tries to do the right thing but isn't afraid of a little dirty work when needed. He and Raymond understand one another—they both have an honorable criminals' code, which is more that I can say about Dry Eye (Henry Golding), henchman for Chinese crime boss Lord George (Tom Wu), who Mickey isn't interested in selling to because the Chinese deal in deadly heroin. Ritchie—like Martin Scorsese and his interest in the Italian mob—seems fascinated by criminals with a moral code, even a twisted one. He writes Mickey's character like a gentleman who moves through upper-crust English society with ease but also quietly asserts himself as the king of the underworld's jungle. It's certainly a nice touch of meta storytelling that Fletcher has turned his investigation of Mickey into a screenplay, one that we get to see play out in the flashbacks, some of which are false—remember, Fletcher is an unreliable narrator. Eventually all becomes clear, and the film resolves satisfactorily, but not before Ritchie has pulled his audience through London's dirty underbelly, populated by an unforgettable rogue's gallery of characters. If you're into this sort of crime romp, this is definitely worth a matinee.

Anna It's definitely enough fun for a trip to the theater. Like you, I think hitting a matinee of this rollicking adventure is the way to go. There's a lot of talent on that screen—the fact that Mickey is one of the more boring characters speaks to the supporting cast. I liked Grant's turn at playing an un-posh scumbag—he doesn't always have to be the guy getting the girl! So refreshing! The action is prevalent and occasionally unconventional, enough to keep you on your toes for the entire wild ride. Clever enough cutaways and twists in the storyline make you think one thing happened only to learn later it was something else entirely. You want the bad guy to lose, as long as you feel confident you actually know who he is, and the not-as-bad guy to win! It's a sort of unconcerned whodunit where bodies end up in freezers, drugs run rampant, and everyday reality seems far removed from the world on screen. I didn't find The Gentlemen to be terribly witty or shockingly clever, but it was one thing for sure: entertaining. Sometimes that's all you need from a Saturday afternoon at the theater. All the hoopla will be more fun on the big screen, so catch it there while you can. Δ