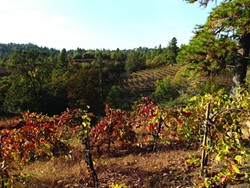 A golden opportunity recently came my way when I was invited on a media tour to visit El Dorado wine country near Placerville, California the first week of November. My husband Dan and I first visited the wine region when we were traveling to South Lake Tahoe in 2000. It was an easy detour from Highway 50 where we met with pioneers John and Barbara MacCready at Sierra Vista and Greg Boeger at Boeger whose wineries were established in the early 1970s. We left impressed.

Of course, the region was still pretty small then, so I was eager to see what had occurred over the last 13 years. Then it was a mere handful of wineries, as it was in Paso Robles when I relocated to SLO County in 1996. Today, El Dorado wine country offers 33 family-owned wineries, plus many others that are not among the El Dorado Vintners’ Association. At one point a winemaker told me there are about 90 wineries in the region now.

The number of wineries in each area differs greatly—no other U.S. region has expanded as rapidly as Paso Robles, which grew to more than 250 brands in one short decade. El Dorado, Spanish for “the gilded one,” offers many wineries that are very much like those in our Central Coast wine regions. There are larger producers who have distributors showcasing their wines in shops and restaurants in major cities like New York and Los Angeles, but none of them are producing huge amounts of wine. Nearly all of the El Dorado wineries, however, are owned and operated by families who are impressively committed to their craft.

Throughout the trip I couldn’t resist comparing El Dorado to Paso Robles as they share so many similarities. Both are warm climate growing areas; El Dorado gets some winter snow, but they’re in drought conditions just as we are here on the Central Coast. The wineries are found in diverse elevations, from the low hills to steep mountainside vineyards that favor cool climate varieties. Most wineries specialize in big-bodied, brooding red wines like zinfandel, petite sirah, cabernet sauvignon, and cabernet franc. And their wine country trails continue to expand with more newcomers settling there to grow and produce Rhone varieties, although syrah has been around since I first visited Sierra Vista.

During this trip we met the region’s pioneers from the ’70s including Greg Boeger of Boeger Vineyards, a pioneer who helped many of his peers get started in the modern commercial industry. We also met Dick Bush, who sought the expert advice of Boeger when he built Madrona in 1973. Now their wineries are being run by their sons: Madrona is managed by Paul and his wife Maggie Bush, whose amazing riesling blew me away. Justin Boeger is running Boeger although his father is still involved. We didn’t taste every wine from these winemakers because of our limited timeframe. But when you find yourself blown away by some of their wines, you can be sure they’ll have other varieties you will like.

Among the new El Dorado wineries I enjoyed visiting is the sustainably farmed estate at Cedarville Vineyards (named for a former gold mining area that’s now a ghost town), and I was impressed by their delicious 2011 zinfandel. At Narrow Gate vineyards we were provided a lesson in biodynamic farming, then tasted their delicious Primitivo.

El Dorado County has a very popular tourist site named Apple Hill, and it draws one million visitors every year in October—obviously, this is not the best time of year to visit unless you don’t mind heavy traffic and long lines. Between the small towns of Placerville and Camino along Hwy. 50, you’ll find several excellent wineries to visit that I can recommend: Boeger, Illuminare, Madrona, and Wofford Acres Vineyards. Around the towns of Placerville and Fair Play do seek out Cielo Estate, Nello Olivo, Sierra Vista, and Skinner Vineyards.

Among the funniest comments I heard was from vintner Mike Skinner of Skinner Vineyards, a winery focused on Rhone varieties. It happened during a tasting focused on winegrapes grown on various elevations by several wineries in El Dorado, where we heard from Skinner winemaker Chris Pittenger, originally from Napa Valley where he was assistant winemaker to the legendary Helen Turley: “We have lots of choices to make with Rhone wines and keep it Rhone style. I like to describe our grenache as pinot noir on steroids.” To which Skinner quipped: “I like to describe it as pinot noir with balls.” Everyone laughed. Despite the jokes, I found Skinner’s 2012 grenache rosé and 2011 grenache delicious wines.

One of the most outstanding dessert wines I tasted was the Sierra Vista 2012 viognier doux, which paired exquisitely with the delicious apple galette I enjoyed during the pizza dinner party for the local vintners and media guests. It took place at Eden Vale Bed and Breakfast; co-owner and chef Gayle once owned a restaurant, which shows in the quality of her impressive and irresistible breakfasts and dinner we loved while staying there. Another excellent meal I’d return for was our dinner at Smith Flat House, a historical structure.

Every year thousands of skiing zealots drive up Hwy. 50 en route to South Lake Tahoe, which is at the eastern edge of the El Dorado viticultural area. If that’s your route, I strongly recommend visiting El Dorado wine country. It’s well worth your while to detour for a night, far better to make it two nights, in El Dorado wine country to explore these outstanding businesses. If you’re interested in more personal comments don’t hesitate to send me an e-mail—I love sharing my passion for great food and wine experiences.