Tickets for Comedy Tonight at the Great American Melodrama are available online at americanmelodrama.com or by calling the box office (open noon to 6 p.m., Wednesdays through Saturdays; and noon to 5 p.m., Sundays) at (805) 489-2499. The theater is located at 1827 Front St., Oceano. Tickets start at $25. Comedy Tonight runs through Sept. 12, followed by Peter Van Slyke's Frankenstein's Bride Sept. 16 through Nov. 14.

How did you get through the pandemic? Did you have technologically fraught Zoom calls with half-dressed spouses walking in the background and computers frozen and glitchy? Did you find yourself under the thumb of your employer's "IT guy" when things went wrong during remote work? Was your pivot to buying things online rife with difficulties as you navigated new websites?

These and other shelter-at-home challenges are covered in the Great American Melodrama's first post-pandemic show, Comedy Tonight, a two-act song- and dance-filled extravaganza thick with puns, parodies, and dad jokes so corny they upstaged the theater's salty-licious popcorn and soft pretzels. 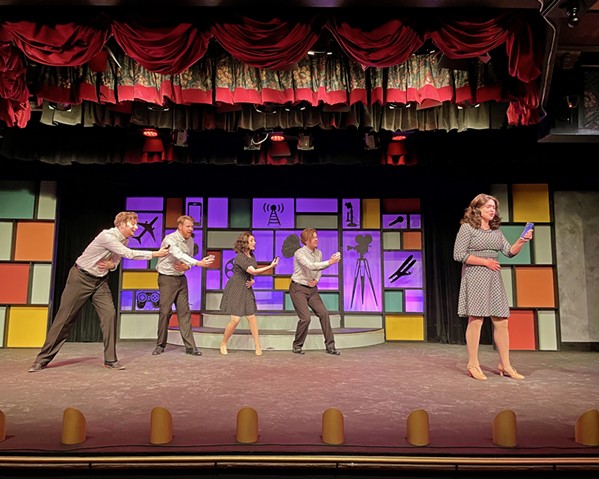 The house was nearly full the Friday when my wife and I rolled into Oceano for a night at the theater. As usual, the organization was a tightly run machine, with staff scanning tickets, showing patrons to their seats, and guiding them through the efficiently managed concession stand. Who runs this place? Mussolini? When they announced the show would start at 7 p.m., they meant it!

We got a pitcher of Firestone 805 beer, two soft pretzels and cheese, a bucket of popcorn, and the hummus and vegetable tray, with the show's cast manning the concessions and singing songs every time some cash hit the tip jar. Then we gathered our provisions and settled into our seats. There ain't a bad one in the house, by the way. No matter where you sit, the stage is in clear view.

The Melodrama is a true working theater—folksy, intimate, and genuine. There are no prima donnas here, and the cast knows they're presenting musical comedy, not Ibsen. In fact, the crowd that loves the Melodrama is here because they love the accessible fun it provides. You can tell the cast—Ben Abbott, Katie Worley Beck, Mike Fiore, Randa Meierhenry, and Toby Tropper—are having a blast up there, and their joy is infectious.

Abbott served as emcee, and the tall actor's comedic timing made him ideal for the job. He knew how to work the audience, and when it came time to sing and dance, he had the chops. Nothing personal, gents, but when it comes to strong singing voices, the ladies have you beat. Both Meierhenry and Worley Beck have terrific, potent voices. They were microphoned but didn't need it. These ladies project! They, too, nailed their jokes and moved around the stage like they owned it. Tropper has a natural goofy likability, and he's terrific at reacting to the actors around him. As far as pure physicality, the award goes to Fiore, whose body comedy had the audience rolling. This is a terrifically talented cast.

Hats off to Musical Director Adam LaSalle and piano accompanist Lacey McNamara—the musical energy never lagged—and whoever came up with the simple but elastic set design, bravo! Things moved quickly from bit to bit in each act, and in the post-intermission lull, emcee Abbott kept the audience engaged as he went through the traditional acknowledgement of attendees' birthdays and anniversaries. Like I said, this joint is folksy and friendly!

Throughout the show, there were laugh-out-loud moments, and the songs were familiar favorites with new lyrics by Eric Hoit and the Melodrama's new artistic director, Eleise Moore, who if you're a Melodrama diehard you know she isn't new at all. Moore performed in her first Melodrama show in 2006 after graduating from PCPA, so she knows what the Melodrama is all about and what the audience wants.

My favorite segment of the show was set to the music of West Side Story and explored the rivalry between PC and Mac users. There were also bits about the desperation of airlines struggling to get reluctant travelers flying again.

Comedy Tonight made the audience laugh madly at what we had all been through over the past 15 months, but it also reminded us that the isolation took a toll. Now that's good theater. Δ