Out there, near the fog-swept water hazard of the 13th hole at the Blacklake Golf Course in Nipomo, a hideous creature lives. At least, according to the Great American Melodrama’s current production, Trudy and the Beast. 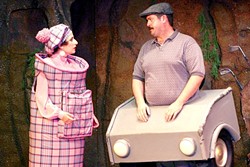 This hilarious and localized satire of another story with a similar name opens with a mysterious exposition. Accompanied by familiar arpeggios on the piano, thanks to Musical Director Ilana Atkins, the audience learns that a young golfer sliced his ball into that same water hazard during a tournament. Later that evening, he met there with his agent and caddy to confess to them his dishonesty about the shot, when the three were confronted by the goddess of golf, who cursed them all for besmirching the name of the game.

But now, weeks later, a young amateur golfer named Trudy (Katie Worley Beck) takes to the course. She’s not great; in fact she almost always slices her ball to the right, but she keeps at it for nothing else but love of the game. Trudy’s friend Minny (Rachel Tietz) tags along, too. Minnie is a hopelessly ditzy blonde who joins Trudy on the course in hopes of finding a rich golfer to woo.

Just such a target comes by when pro golfer Gerard (Matt Miles) and his caddy Felix (Mike Fiore) play through. Minnie immediately tries to work her charms on the brash, mustachioed Gerard, but he has his sights set on Trudy. If you haven’t caught on yet, Gerard is the Gaston to Trudy’s Belle, and he is arrogant and gross. Miles plays the character with greasy gusto, and Worley Beck’s dry heaving reaction is priceless. Fiore delivers a witty underscore as a golf commentator, when Felix likens Gerard’s pickup attempts to a golf putt.

The ladies learn that the manly, posturing Gerard is afraid of playing the 13th hole. Trudy mocks him for it, but Minnie doesn’t understand why. They explain the rumor that a hideous, gilled, and web-footed creature lurks near the water hazard there, The Creature of the Blacklake Lagoon (Jake Delaney). As they speak, the creature does some lurking closer by, just behind a bush, listening to the conversation. Once he is spotted, the group screams in terror, and smacks him with a 9 iron.

The poor, battered creature returns to his underground lair, a dank cave near the 13th hole. He opens up about the experience to Mrs. Putts (Eleise Moore) and his caddy Cartsworth (Paul Henry). These two were his agent and caddy, respectively, before they too were transformed by the curse. Mrs. Putts now resembles a golf bag. She complains that the plaid pattern is “so 1990s.” Cartsworth, however, was transformed into a golf cart, complete with headlights and honking horn.

The two remind The Creature that the only way out of the curse is for him to find true love, and they implore him to consider the people he saw. He tells them about the two young ladies he just observed before receiving a golf club to the ribs. Mrs. Putts and Cartsworth argue about whom he should try to woo, and over who is to blame for their predicament in a very funny parody of another Disney tune from Beauty and the Beast.

This production is a fantastic opener for the Melodrama’s fall season. The cast includes many new faces to the Great American Melodrama stage, as well as some familiar veterans. The ensemble displayed some amazing rapport for their first weekend with the production. The comedy was perfectly timed and topical, the singing was tuneful, and piano was polished. It’s everything you want from a visit to the Great American Melodrama.

Sun Arts Editor Joe Payne from New Times' sister paper to the south is considering taking up golf, just for the puns. Contact him at jpayne@santamariasun.com.