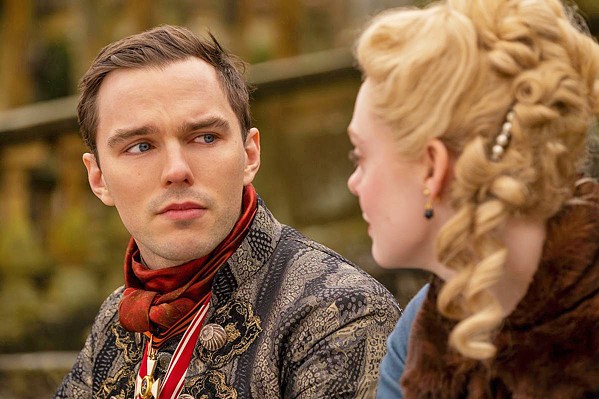 If you liked the tone and vibe of writer-director Sofia Coppola's 2006 film Marie Antoinette, you'll dig this not-very-accurate "historical biography" of Catherine the Great (Elle Fanning), a Prussian princess married off to Peter III (Nicholas Hoult), the depraved and dangerous ruler of Russia, titled onscreen as The Great: An Occasionally True Story. "Occasionally" is right. Don't watch for the history; watch for the entertainment!

Created by Tony McNamara (The Favourite, Cruella), the series—now in its second season—examines the Russian royal court, its intrigues, debauchery, and machinations. Peter is a weak leader, more interested in bedding other men's wives, drinking and eating, posturing as a great military mind, and fretting about living in the shadow of his forebear, Peter the Great. He has to deal with his military, most notably the drunken General Velementov (Douglas Hodge), the conniving archbishop of the Russian Orthodox Church (Adam Godley), and his sycophantic "friends," who more fear his power than respect him.

It's a blast watching Catherine gain confidence, and with her lover, Leo (Sebastian De Souza), gifted to her by Peter; her confidant and maid, Marial (Phoebe Fox); and sympathetic bureaucrat, Orlo (Sacha Dhawan), plot Peter's overthrow with the hope of enlightening Russia and her people with art, science, and other progressive ideas. Funny and engaging—this one's easy to binge. (20 approximately 50-min. episodes) Δ