The green age is here

The Botanical Engineers has a uniquely cartoony feel to it. It’s the kind of play where a newbie CIA agent and his overbearing boss are liable to erupt into song and begin tango dancing together aggressively, where a plant can communicate through a series of bizarre gestures, and characters can morph from wicked to good in less than an hour, shaking their heads at how pointless their lives were 20 minutes ago. The Botanical Engineers feels very much like a show written for children, and yet there are nuggets of wry, sophisticated humor to be found. 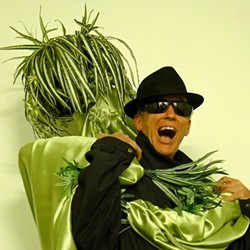 The Botanical Engineers comes to life through a story recounted by a rather leafy-looking granddad (Jonathan Shadrach), to his equally leafy young granddaughter (Livi Dom). Both, we soon come to understand, are human-plant hybrids, just like everyone else in the world. Grandpa, cutely called “Poppy,” admits that he was once a full-blooded human called Burt Jenkins—much to his granddaughter’s disgust. He begins to explain the dawning of the
“green age,” and a story within a story begins.

The world was being overrun by cement and steel, so rebel botanist Dr. Eva Stomata (played by Toni Young) teamed up with a highly intelligent, fast-growing plant called the Zeloniphus (Jean Miller, completely obscured by greenery) in an effort to turn the world’s dead, gray metropolises into lush habitats. But the radical efforts of Eva and her plant allies to uproot buildings and replace them with jungles landed her in hot water with the CIA, who labeled her an eco-terrorist.

(“They were destroyers of our way of life,” older Burt explains to his granddaughter, when she indignantly asks him why. “But your way of life sucked,” she innocently replies.)

So younger Burt, a brand-new CIA agent (played by David Hance), presumed to be an expert on the subject based on a master’s thesis he paid someone else to write, gets smacked with the case by his intimidating boss Osbourne (a hilarious Michael Siebrass). Problem is, Burt actually doesn’t know a thing about eco-terrorism, is easily frightened, and suffers from a debilitating crush on Eva.

When he finally finds her and the Zeloniphus hiding in a cave, it looks like Burt may not be terribly incompetent after all. But then he accidentally gets implanted with the plant’s DNA, which renders him utterly useless to the CIA—but very important to Eva’s green revolution.

Espressivo! performances tend to be light, compact, original, and infused with live music, and The Botanical Engineers is no exception. Founded in 2010, the company entered the local theater scene with an Irish-themed double feature of Wallace’s original Celtic musical And the Sea Shall Provide and W.B. Yeats’ The Cat and the Moon. Last summer, the company returned with Wallace’s Lunatics in Love, a play about a doctor who, during the French Revolution, opens a posh mental institution where wealthy aristocrats can avoid the guillotine by pretending to be insane.

The Botanical Engineers, which opens Friday, May 18, and travels to some unexpected but fitting locales—among them the SLO Botanical Garden—may be too earnest for some tastes. However, those looking for a buoyant comedy with a positive environmental message and the assurance of a happy ending can do no wrong here.

Arts Editor Anna Weltner types with a green thumb. Contact her at aweltner@newtimesslo.com.