The Green will chill you out on Jan. 17, in the Fremont Theater

Reggae is a pretty chill genre, the kind of sounds you want on when you're hanging out with friends with nowhere to go and all day to get there. When reggae isn't challenging the power structure or praising Jah, it's usually celebrating life and love, which is generally the case with music by The Green. It's impossible to feel anything but irie listening to this band. 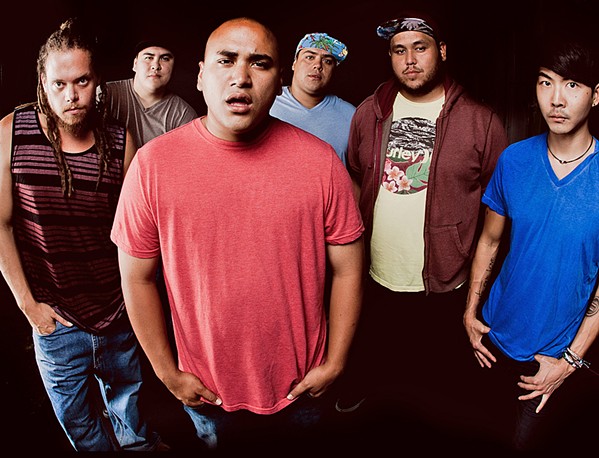 The Hawaiian sextet delivers mellow reggae and smooth lovers' rock with a decided R&B and soul vibe. That R&B influence feels even more pronounced considering that four of the six members share lead vocal duties and sing amazing harmonies together—just like Motown classics. They deliver richly rendered feel-good tracks, and on their newest album, Black & White, they make their sound spare and warm by going acoustic.

Released in 2019, Black & White is filled with great tracks, from "Good Vibrations" to "Foolish Love" to "Runaway Train." To get a taste of their live show, check out some of the live videos on YouTube, which feel intimate and soulful. If you want to explore a little further back into their sound, watch the video for "All I Need," which is really well shot and a smart visual representation of the song's lyrics. The love song starts with a Hawaiian woman being blessed by an elder (her mother maybe?)—it's all pretty tender—before lead vocalist Caleb Keolanui launches into his declaration of affection: "It's a mystery/ Yeah, how love can work out sometimes/ Are you missing me/ I wonder?// 'Cause I can't get you out of my head/ I need you to understand/ That baby it's you/ You're the only one for me."

Also this week at the Fremont, check out Karl Denson's Tiny Universe, which presents its show called "Election Year—Winter Edition" on Sunday, Jan. 19 (doors at 7 p.m.; all ages; $28.83 at Boo Boo's and fremontslo.com), with Omar Velasco opening.

Denson—a funk and jazz saxophonist, flutist, and vocalist—played with Lenny Kravitz and co-founded and led The Greyboy Allstars before forming Tiny Universe, but he continues to be a highly sought-after session man. He played on the Rolling Stones' 2015 album Sticky Fingers Live, Slightly Stoopid's Top of the World (2012), and Steve Winwood's About Time (2003).

On his new album, he exercises his political dissatisfaction. According to his bio, "Singer and saxophonist Karl Denson fronts the Tiny Universe as if he's preaching the gospel. His energy and spirit are contagious while his songwriting serves a larger message of fellowship—across generations, genders, religions, and cultures. Not surprisingly, he's none too pleased with the current state of political discourse. Thus, the reason why KDTU's new album, Gnomes & Badgers, out now on Seven Spheres Records, is Denson's hard-grooving answer to these tragically divisive times."

This dude is extra awesome! He'll deliver the hard-charging funk! 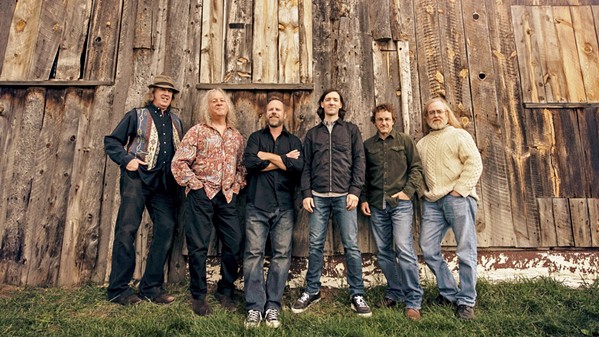 Josh Ward has one of those country voices that fits the genre so perfectly you can't imaging him singing anything else. The Houston native and independent artist is also one of those do-it-myself types who doesn't want a record label telling him what he can and can't do, and why would he? All on his own he's become a huge regional success and now a touring powerhouse!

He had 12 consecutive No. 1 hit singles on Texas regional radio, millions of views on YouTube, and more than 16 million streams globally on Spotify and Pandora, and he parlayed that success into playing 200 gigs a year, including returning to the Central Coast to play The Siren on Saturday, Jan. 18 (7:30 p.m.; 21-and-older; $25 presale at Boo Boo's and eventbrite.com), with Randall King opening a Numbskull and Good Medicine Presents show.

According to his bio, Ward was an adolescent drifter who rode the rodeo circuit, worked the Texas oil fields, and eventually came into the music business. After blowing up on Texas radio and touring regionally, Ward found receptive audiences on the West Coast thanks to an opening spot on Red Dirt artist and friend Cody Johnson's tour. Now Ward returns regularly.

"When we went back to the West Coast by ourselves, it was sold-out shows," Ward said in press materials. "I was literally blown away."

He's currently touring in support of his fourth full-length, 2018's More Than I Deserve.

"With the philosophy of 'don't fix what isn't broken,' Ward went right back into the Rosewood studios where he recorded all his previous releases and joined producer Greg Hunt once again behind the board to create the next dimension of Josh Ward country music," his bio continued. "The new album is 11 tracks strong featuring the signature instrumentation from guys like John Carroll (Cory Morrow) on guitar; Nate Coon (Aaron Watson) on drums; Milo Deering (The Eagles) on acoustic guitar, steel, dobro, fiddle, viola, and mandolin; and Terry McBride (McBride and The Ride) on backing vocals and also writer of three of the tracks. The album is classic Josh Ward style on every front with just a little more gusto and a little more miles on it. Full bodied and emotionally fragrant, every song jumps out kicking up the kind of country music nostalgia Ward is revered for."

Led Zeppelin tribute act Zoso plays SLO Brew Rock on Friday, Jan. 17 (7 p.m.; 18-and-older; $16 at slobrew.com). Who can tell me where Zoso's name comes from? If you're thinking Led Zeppelin IV and the symbols representing the four band members—Jimmy Page, John Paul Jones, John Bonham, and Robert Plant—specifically the symbol for Page, congratulations! You're right! How many hours did you spend stoned in your room listening to that album over and over again?

Zoso formed in 1996 with the aim to create the most accurate Zeppelin show since the real thing. "For Zoso, it's much more than just being a tribute," their bio explained. "It's about touching a golden era in music. Zoso embodies Page, Plant, Bonham, and Jones in their spirit, tightly wound talent, and authenticity. Each band member has been carefully selected to portray both the appearance and playing styles of their Led Zeppelin counterparts."

Finally you can attend a concert and yell out, "Play 'Stairway to Heaven,'" without getting beat up by fellow concertgoers! 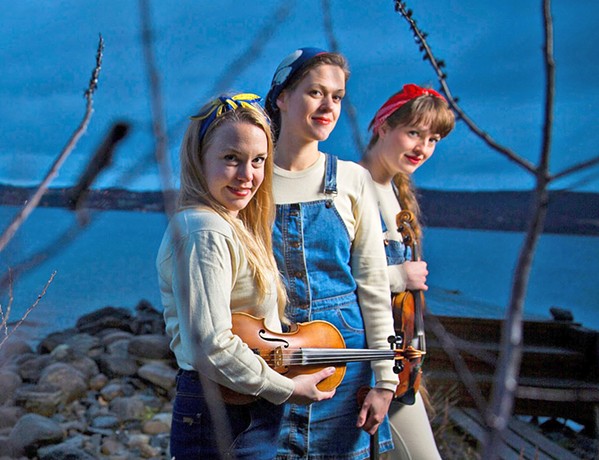 SLOfolks is bringing fiddle trio Fru Skagerrak to two shows this week. Describing themselves as "pan-Scandinavian raw folk," members Maja Kjær Jacobsen hails from Denmark, Elise Wessel Hildrum from Norway, Anna Lindblad from Sweden. "They each bring to the concert their own country's unique musical style and flavor while blending them all into an awesome sound that will thrill you with its beauty," organizers said in press materials. "The result is a blend, an explosion of sounds that exist in Scandinavia today." See them on Friday, Jan. 17, in Coalesce Bookstore (7 p.m.; all ages; $20 at (805) 772-2880); and Saturday, Jan. 18, in Castoro Cellars (7:30 p.m.; all ages; $20 at (805) 238-0725). 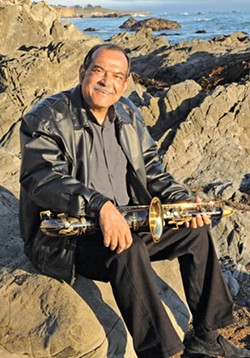 Two-time Grammy-winning saxophonist Ernie Watts and his quartet will play the next SLO County Jazz Federation concert this Saturday, Jan. 18, in the Unity Concert Hall (7:30 p.m.; all ages; $30 general at Boo Boo Records and my805tix.com). Cannonball Adderley, Marvin Gaye, Frank Zappa, and Charlie Haden are just a few of the artists Watts has recorded with. In fact, he's appeared on more than 500 recordings, played with the Johnny Carson band for 20 years, and toured the world. Watts will play with Marc Seales (piano), Bruce Lett (bass), and Bob Leatherbarrow (drums) during this must-see show!

Bach to the future

Cal Poly has a real treat for lovers of Johann Sebastian Bach (1685-1750), the Baroque period German composer and musician, who'll get the treatment with a bass recital on Jan. 17, and then a week devoted to his talents on Jan. 21 through 25.

On Friday, Jan. 17, Cal Poly Music Department faculty member and string bassist Ken Hustad will present a recital with guest performers in the Davidson Music Center, room 218 (7:30 p.m.; all ages; $5 at the door). Hustad will perform the first movement from Bach's Cello Suite No. 1 in G Major, BWV 1007; and the two Bourrée movements from Bach's Cello Suite No. 3 in C Major, BWV 1009. Other works by Giovanni Bottesini and Oscar Pettiford will also be presented.

The Cal Poly Music Department will present Bach Week from Tuesday through Saturday, Jan. 21 to 25, with presentations and performances on campus and at SLO's First Presbyterian Church in San Luis Obispo.

"This year, the festival will revolve around Bach's most momentous work, the Mass in B Minor, BWV 232," organizers said in press materials.

If it ain't baroque, fix it! Δ