Find your happy place by following The Grinning Bear on Instagram @thegrinningbearslo for menu and up-to-date info on where that food truck is parked. It's serving up fried chicken and more at GBeatZ, Tuesdays through Thursdays from 11 a.m. to 7 p.m. (and sometimes Sundays, too), 675 Grand Ave. in Grover Beach.

I could smell the fried chicken as I approached the truck.

That savory, spicy, floury aroma that can only come from a fryer made me salivate as I walked across the string-light-lit parking lot where three restaurants on wheels had been set up since 11 o'clock that morning.

Taqueria El Guëro, The Grinning Bear, and Beachwalk BBQ were reaching the end of their eight-hour shifts on the pavement at GBeatz on Grand Avenue in Grover Beach—a spot Epic Entertainment created during the pandemic specifically for food trucks, catering companies, and your salivary glands.

I was here for The Grinning Bear, and I already knew what I wanted. The Firebird Sandi: honey hot sauce, ranch, barbecue sauce, lettuce, tomato, homemade pickles, apple cole slaw, pepper jack cheese, and let's definitely not forget about the pickle-brined piece of fried chicken heaven on a deliciously soft bun. I was also hankering for a VietNumNum: pork belly, bahn mi slaw, homemade cracklings, and sambal aioli on a Dutch crunch roll.

Unfortunately, I was too late for the nummy pork, as The Grinning Bear was fresh out of that sandwich for the day. But I'm definitely coming back again. I have to. The chicken was so good that now I have to try the pork. I owe it to myself and to New Times.

Word to the wise, though, that spicy, crunchy, slaw-filled chicken sandwich was definitely a four-napkin job. Maybe five. And the crunch stayed on that chicken almost until the last bite.

Had The Grinning Bear's owner/chef Brenen Bonetti actually watched me eat it (he admits to sometimes taking a peek at his customers as they chow down), he would have seen the look that he lives for.

"It's just a great feeling for us to see the full body nod, like, 'Oh yeah, this is good stuff,'" Bonetti said. "And I think that's what draws me to fried chicken. ... It's so primal, you gotta get your hands dirty. ... It's just so good. It's universal."

I honestly feel the same way. Fried chicken is just that good, even when it's mediocre.

But Bonetti's chicken isn't mediocre, and he worked for at least a decade to get the brine, the dredge, the seasoning just right.

His journey to fried chicken greatness started much longer ago than that, though. He remembers being over at a friend's house for dinner, and his friend's mom was cooking up some fresh fried chicken. Although Bonetti's family cooked a lot, for some reason, he said, they never cooked that.

"It was always KFC," he said, adding that KFC is good in its own right, but seeing his friend's mom flour, egg, and coat the chicken was a whole new event. "It was just kind of fun to see that whole experience, or that whole process, rather. And having that bite where the steam is coming out and blowing in your face, and it's just so fresh, you know?"

I do know, Bonetti. It's pure magic.

Although Bonetti was born in SLO County, his family moved up to Salinas when he was in high school. After he graduated, Bonetti moved back to SLO to go to college—he ended up going to the beach instead and landed his first cook job flipping burgers at Cork 'n' Bottle, moving on to the SLO Country Club. He realized attending culinary school was the way to go, so Bonetti moved to San Francisco a little more than 10 years ago, enrolling in Le Cordon Bleu College of Culinary Arts. 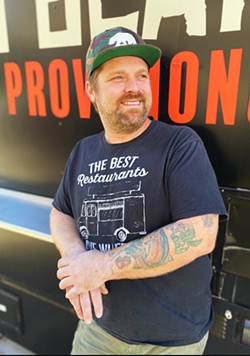 Upon finishing the program, he worked at the Cliff House in San Francisco (a 100-year-old piece of history that recently announced it would be closing for good on Dec. 31) before starting a catering company in Salinas and realizing that he still had a lot to learn about cooking. So he moved back to The City and got a "bottom-of-the-line job" at the Farollon in Union Square (another piece of history that closed on Aug. 27 after more than two decades)—working his way up from shucking oysters to sous chef. With a few chef jobs (at Scandinavian, Cajun, and Caribbean restaurants) in between, he and his wife got the urge to return to the Central Coast about three years ago.

"My wife and I, we had a roommate, we were living in a small spot, working 16-hour days, and just kind of realized that it was no longer what it was in the beginning," Bonetti said. "San Francisco was great—we got to try so many things—but we missed having the community."

All the while, Bonetti worked on that chicken in the background, serving it up at staff meal times, soliciting feedback, feeding his wife lots and lots of iterations.

Once back on the Central Coast, he initially worked at Tooth & Nail, commuting from Pismo Beach to Paso Robles every day, but Bonetti was working at the Avila Market when the pandemic started. As restaurants were put through the rigamarole with ever-changing COVID-19 shut-down orders, he started helping his aunt at the Blue Moon in Avila and just realized that it was time to get his own thing going.

"I know, it sounds bonkers," he said.

He said there are days when he's driving the food truck into work, when he realizes that he's no longer in his commuter car—although he is commuting to work.

"It's a friggin' restaurant that I'm driving around," Bonetti said.

The Grinning Bear's been at it for almost two months now with a menu that Bonetti's been working on over the years, just like his fried chicken.

"Food truck food's gotta look a certain way, I feel, and it's gotta come at a certain price," he said.

If you just want classic, one-hander, fried chicken, you can get the Six Shooter—which is a bucket of fried chicken (six pieces), sauces, homemade pickles and apple slaw, and Hawaiian rolls—or the Picklebird plate—three pieces of chicken, mac 'n' cheese, mashed potatoes and gravy, and apple slaw. Plus, there's always a beef and/or pork option on the menu, and Bonetti even makes his own vegan fried chicken.

"I thought I'd be tired of fried chicken by now," he said with a laugh. But he's not. Bonetti said he sneaks a piece every day. And I totally get it.

"My whole thing is that you have to grin and bear life, so come to The Grinning Bear and get some food," Bonetti said. "There's so much going on, and it sucks, but we just have to deal with [it]. ... Get some food that will make it better." Δ

Editor Camillia Lanham is happy that fried chicken will always be on the menu. Send comments to clanham@newtimesslo.com.