The Groves on 41 rallies support to keep its sign

A decorative water tower created to advertise The Groves on 41, a mother-and-daughter-run olive farm, has caused enough controversy that SLO County said the sign might have to be removed.

Although the county has had ongoing issues with the sign since 2016, more than 1,000 people signed a petition on care2.com in support of saving the farm's sign. 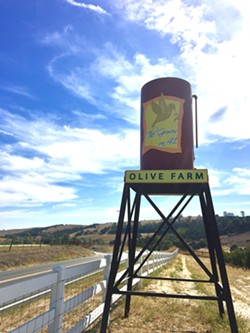 "We are at the point where all we want is for this to go away. We want to go on and not lose our sign if we don't have to," said Karen Tallent, mother and Groves on 41 owner.

Issues began, Tallent said, when she installed an air conditioning unit in her barn specifically for olive oil storage—the perishable item needs to be kept at 62 degrees.

"We didn't get a permit for it because we didn't know it was needed. So we got cited for having air conditioning that was not permitted," she said.

When a code enforcement officer went to the property to inspect the barn in question, he noticed the water tower structure that she had put up months before.

Tallent said that before she put up the water tower sign made by her son-in-law, she called the SLO County Planning and Building Department to make sure it was OK to construct, and she got approval. But the code enforcement officer said he wanted an "as-built"—a revised drawing submitted by a contractor upon completion of a project—for the sign. Tallent said she complied.

Trevor Keith, SLO County's Planning and Building director, said this started when the department received a code compliance complaint about the water tank sign on Sept. 28, 2016.

"Upon further inspection, department staff determined that the water tank sign was in fact an unpermitted structure and was located within the front setback of the property," Keith told New Times via email. "This investigation further found that unpermitted modification had been made to the agricultural storage barn on the property, and that the converted barn structure was being used as an unpermitted events facility."

"If it blows over onto Highway 41, it would create a potentially dangerous situation, risking harm to anyone traveling on Highway 41 in this area," he said.

On mutiple occasions, the department has provided Tallent with options to advertise within guidelines set by the county's land use ordinance, Keith said. Options include an application for a conditional use permit to request a modification of ordinance requirements, which would include a hearing before the Planning Commission.

Another option would allow Tallent to relocate the structure to meet the required 25-foot setback from the property line, or she could replace the water tank with a sign that doesn't require a building permit. The Groves on 41 also has the option of removing the sign.

Tallent said she has lost several thousand dollars trying to make her sign and barn compliant with the county—she doesn't believe it's fair to spend more on a conditional use permit. She said she can't move the sign farther away from the highway because it will interfere with mechanical harvesting—plus the sign is cemented into the ground with rebar.

"To the extent legally and reasonably possible, our department tries to be flexible to the implementation and interpretation of the rules as they are written, in order to account for people's unique situations and respective property rights," Keith said. "That being said, the Department of Planning and Building staff including myself, as the director, do not have the authority to arbitrarily change existing regulations." Δ