THE HARDER THEY FALL

Co-writer/director Jeymes Samuel (They Die By Dawn) helms this revisionist Western populated by fictionalized characters based on historical Black people of the Old West. At the center of the revenge story is Nat Love (Jonathan Majors), who as a child saw his parents gunned down by the outlaw Rufus Buck (Idris Elba), who also carved a cross into the boy's forehead. As an adult, Love—now an outlaw who robs other outlaws—learns Buck has been sprung from the penitentiary and is heading to his old stronghold of Redwood City, where they're headed for a bloody showdown. (139 min.) 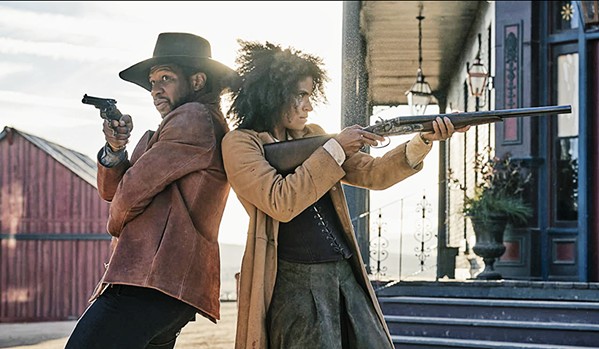 Glen This film—one of a rare few Westerns whose principal characters are all Black—is aimed squarely at a modern audience with a nonchalant rendering of transgender character Cuffee (Danielle Deadwyler), multilayered explorations of racism both within and outside the Black community, and a pumping soundtrack featuring reggae, hip-hop, and more. Despite the film's characters being based on historical figures, this isn't a history lesson—huge liberties are taken with who these people were, and the story itself is fantastical—but it's entertaining as heck! The violence is very Quentin Tarantino-esque—stylized, sudden, and bloody. On one side is Love, who for 20 years has been pining for revenge for his parents' brutal murder. While he's killing one of Buck's gang members, his partners—sharpshooter Bill Pickett (Edi Gathegi) and quickdraw Jim Beckwourth (R.J. Cyler)—ambush a gang that's just robbed a bank, taking their $25,000 ... loot that was supposed to go to Buck. Love's revenge has just begun. Meanwhile, Buck arrives in Redwood City, where he takes control of the community, demanding its Black residents pay him a $50,000 tribute. It's pretty standard stuff story-wise, but between the acting, cinematography, soundtrack, it makes for a deeply engrossing tale of the Old West.

Anna It definitely held my attention in spite of being a pretty inside-the-box Western. The revenge-flick element mixed with gunplay and some innerworkings of the characters' relationships made for an entertaining ride. Not to mention the cast worked well together—and the heavyweights here in Majors, Beats, and Elba shine. I don't remember Deadwyler from her past roles, but she's been in several things I've seen. That being said, I won't soon forget her performance as Cuffee, a quickdraw gunslinger with a smart mouth and a deep loyalty. It's hard to praise this film for being super innovative because story-wise it really wasn't, but sometimes the standard is what it is because it's tried-and-true entertaining, and for me that's the case here. It's just a good ol' fashioned showdown with enough backstory to give us a side to root for. The soundtrack is wonderful, and in that department The Harder They Fall wasn't a usual Western at all. The music and cinematography definitely were two key components to my enjoyment—it looks great and sounds awesome. That's two boxes ticked for me!

Glen Despite the lengthy cast list, the characters are fleshed out and memorable. One, Jim Beckwourth, I'm well versed in as he's a figure in the Reed family murders at the San Miguel Mission in 1848. Beckwourth was a Pony Express rider when he happened upon the murder site. If you look them up, the other characters also have their own Wild West bona fides. Mary Fields was born into slavery but became a star-route mail carrier, which was very dangerous work. Trudy Smith is based on a known pickpocket, though in this film her character is far more treacherous. Nate Love was also a former slave who became a cowboy and horse breaker, though he was eventually captured by a band of Pima Indians. After his escape, he became a Pullman porter on the railroad and died in LA in 1921. Aside from the murderer Cherokee Bill, Rufus Buck was the only other historical outlaw, who ran a mixed-race gang of murderers, rapists, and thieves. These real-life Black figures from the Old West are fascinating, and though they don't bear much resemblance to their film characters, that doesn't stop the story from being a mayhem-filled ride. I'll watch it again.

Anna I loved that local connection to Beckwourth. It's so fun that they used actual historical figures, even if they don't match up much with their namesakes. Westerns have been such a staple of American cinema for so long. It can be hard to be innovative, but the filmmakers here found a good formula. I didn't check out, I followed the story, and I invested in the characters. The film has gotten pretty good ratings from both critics and audiences on Rotten Tomatos and sits at a 6.6 on IMDB, all around pretty respectable reviews. We're heading into the season of big blockbusters, and while The Harder They Fall has a great and well-known cast and obviously wasn't made on a shoestring budget, it doesn't feel like a big, overblown movie. I'll take it where I can get it as we head into the Christmas season! I believe this is only a streaming film as of now, and it's totally worth using your Netflix subscription to watch. It may not be on my top movies list for the year, but that doesn't mean I didn't enjoy it. If you like Westerns, this will be a great little distraction for a couple of hours curled up on your couch. Δ