The harrowing tale of roasting a whole pig underground!

My friend George Griffin is part caveman. When one of his chickens stops laying, he kills and eats it. This year for Winterberry, an annual Winter Solstice party, which is a tradition among George and his large group of friends with a revolving series of hosts from year to year, George—this year’s host with his wife Liz Rhoads Cordoba—decided to procure and roast a whole pig.

He found a small, sustainable hog farm in the valley, drove there, picked out a 130-pound 6-month-old sow, put it in a dog crate, drove it to a processor who shot it in the head, cleaned and gutted it. Then, George packed it in ice and drove it home.

With the help of friends Ray Lee and Keith Pellemeier, George dug a pit in his backyard, built a roaring fire in it, stoked it for four hours, let it burn down for an hour, covered the coals with rocks, placed the prepared pig in the pit, covered it with corrugated tin, covered that with lots of dirt, and waited. Oh, hell, I’ll let George tell you via his Facebook post:

“I’ve got it figured out. Thanks to Señor Google. 1) Find pig. 2) Dig a pit. Drink beer. 3) Friday afternoon 4ish, build a fire in the pit—a big one. While fire is burning, season and stuff the pig. Going to have to give the pig a name. 4) Get Mrs. Pig ready. First, pour a Topless Blonde from Central Coast Brewing. Rub Mrs. Pig inside and out in a spicy loving way. Fill her up insides up with assorted veggies. Oh yeah—and linguiça, of course, because, well, pig inside of pig just makes sense! Wrap her in banana leaves, roll the whole package up in wet burlap, and then tie it all together with chicken wire and wait for the oak logs and branches to burn down. 5) Cover white-hot coals with rocks. Switch from beer to wine. 6) Put Mrs. Pig on the rocks and bury with an insulating layer of dirt. 7) Cover the whole hot mess with metal lid and seal with more dirt. 8) Eat dinner. 9) Go to sleep, wake up, have coffee, and check on pig. 10) Worry that something has gone wrong in the pit. 11) Drink beer. Wait. Wait some more. 12) Greet guests. Drink wine. 13) Dig up and eat Mrs. Pig.” 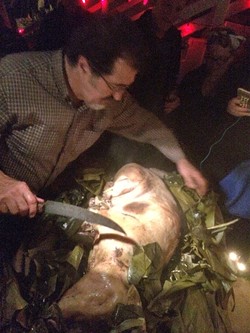 That’s just what we did, and the pig, eventually named Betty, was delicious—tender and moist with a smoky flavor.