THE HAUNTING OF BLY MANOR 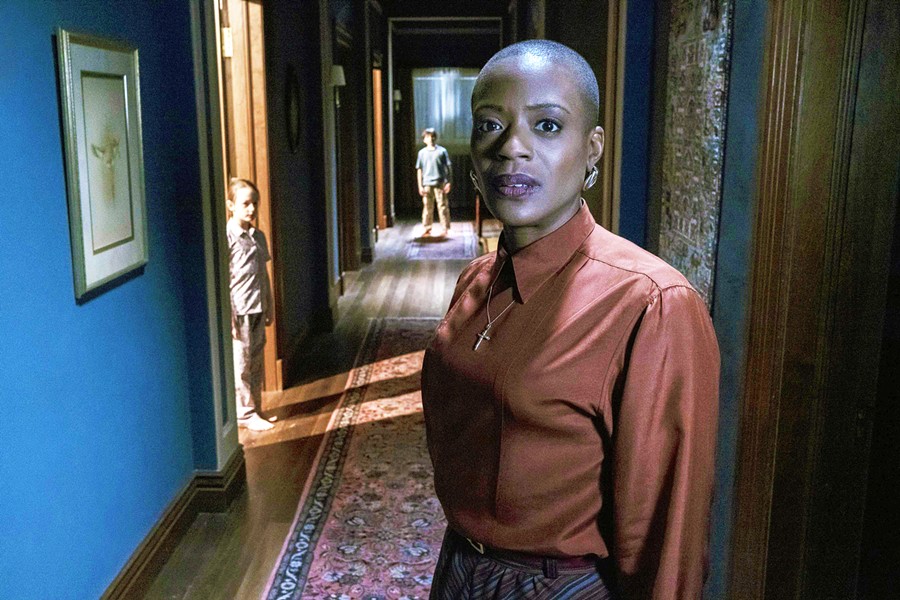 Glen This is second in the Haunting series after The Haunting of Hill House (2018), which I never saw, but after watching this atmospheric and genuinely creepy miniseries, I'm ready to take a look at the first. The Turn of the Screw is really the jumping-off point for this series, which soon moves beyond Dani's story to explore the other main characters, each of whom has secrets to hide and demons in pursuit. This isn't a modern-day horror flick but more of a slow burn. Yes, there are jump scares and some violence, but the episodes rely more on an unsettling atmosphere. Instead of believing in ghosts, the characters are questioning their own sanity. The house itself is a character, its sprawling design re-created in Flora's dollhouse, which she's filled with handmade talisman representing the story's various characters. The grounds, too, have their own creepiness, with the aforementioned lake, often awash in a layer of fog, and an old stone chapel dating back to the early 1600s. As the story proceeds, we discover Bly has a long history of paranormal goings-on.

Anna Slow burn is right, but the payoff is worth it. It definitely relies more on the storyline staying intriguing than it does on jump scares, though they did manage to get me plenty of times. Dani is a former teacher and clearly trying to escape some memories. When Henry hires her on, he tells her in no uncertain terms that if she wishes to keep the position, she won't bother him with anything less than life-or-death emergencies out at Bly. As it turns out, Henry isn't just a blustering and busy jerk, he's hiding from his own demons lurking out at his brother's estate. Mrs. Grose is increasingly lost in her own world; Owen is struggling to care for his mother who's lost in her own world of dementia; and Dani can't shake the past that seems to find her in every reflection. The children are increasingly strange, Miles especially. It's a spooky setup, and while horror can sometimes struggle to end satisfactorily, The Haunting of Bly Manor manages to keep it creepy right to the end.

Glen Each episode is its own little storyline, and I thought one of the most effective was episode five, "The Altar of the Dead," which focuses on Mrs. Grose. In it, she flashes back and forth between time. She opens a door, steps through, and she's in a new outfit in a different moment of her own history. She repeatedly returns to the first day she met and interviewed Owen for the cook position. "Haven't we done this before?" she asked Owen. She's meant to learn something from this revolving memory, and when she does, it's oh so satisfying. Another really effective episode is eight, "The Romance of Certain Old Clothes," where we discover the origin of the Lady in the Lake, a ghostly figure that walks the mansion and its ground. It's a period piece going back centuries. It's also worth noting that the entire story is bookended. It opens in 2007 at a wedding, and a woman (Carla Gugino, the story's narrator), agrees to share a ghost story with the guests. We return to the wedding at the end, giving this old fashioned ghost story a satisfying resolution. I really enjoyed it!

Anna Those two episodes definitely stand out, and while Dani may be presented as the focus of the narrator's tale, we soon see that this is a story much larger than one person or even time period. It gives the manor its own life and breadth, making it almost another character in the web being built. Dani is haunted by a shadowed figure whose eyes shine in big, rounded lights and who follows her from mirror to mirror, always reminding her of the dread and guilt sitting on her chest. We get to learn about these characters' pasts, and that in itself is much more satisfying than if the series tried to keep it all a mystery. We have enough to figure out with some trips through memories and uncertainty about what is actual reality vs. not. I'd totally check out The Haunting of Hill House; if Bly Manor is any indication, it should be a good one to add to our Halloween list! Δ