The Haunting of Hill House

The haunted house has long been a go-to trope in horror movies. The concept has been around so long, in books and movies, you'd think that there wouldn't be much more to do with it. 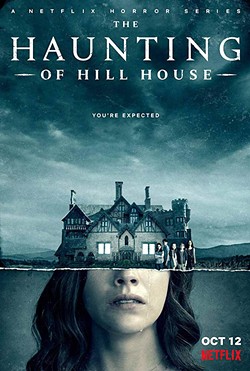 You'd be wrong. Netflix's newest original series, The Haunting of Hill House, breathes new life into the haunted house genre, taking the well-worn supernatural horror elements we are all familiar with and using them as a frame for what is essentially a tragic family drama.

The series is loosely based on the seminal Shirley Jackson novel of the same name, and follows the story of the seven-member Crain family in the past and present. The episodes jump back and forth in time between the childhood of the five Crain family siblings, which is spent in Hill House—the sprawling Gothic mansion their parents are trying to fix and sell—and present, where those same children, now grown, have a fraught and fractured relationship with each other stemming from their mother's supposed suicide, a traumatic event that forced them to flee Hill House all those years ago.

As an entry into the horror genre, The Haunting of Hill House delivers the goods. You want specters, creepy spirits, and jump scares? You'll get them, and they are executed well enough that you'll definitely give very serious consideration to keeping the lights on when you go to sleep after watching it. But what really sets this series apart is its focus on drama within the Crain family. What happens to them in Hill House as children has torn the family apart. Older sister Shirley (Elizabeth Reaser) has grown up to be a mortician. She is hiding a dark secret from her husband. Oldest son, Luke Crain (Michael Huisman), penned a best selling book on the events at Hill House at the cost of alienating his family. Luke (Oliver Jackson-Cohen), one of two twins in the family, is a heroin addict who has relapsed so many times that most of the family has simply given up on him.

The suicide of Luke's twin sister, Nell, forces the broken family to come back together and confront what happened to them at Hill House, adding an extra layer of drama and tension to the supernatural storyline. For anyone who's ever had contentious relationships with their family, the interactions that occur amid all the ghouls and ghosts are instantly relatable. It's that focus on the family's drama that makes this series so interesting. At times, it feels like if you stripped away the horror elements of the series, you'd get a show closer to This is Us than The Shining. Introducing the familiar dynamics of family—the secrets, resentments, and bonds shared by its members—grounds the characters and ratchets up the horror elements to a truly terrifying level.

The Haunting of Hill House is a prime example of why haunted house stories remain a fixture in horror, and a master class in how to elevate the genre and push it forward in new and interesting ways. (10 episodes, 50 min. each) Δ