The heart of a fighter

Americanized martial arts are so much more than the bad kung fu movies and giant-men-in-tiny-spandex-suits of the past. Today, there are multiple forms of martial arts taught in gyms and fitness centers across the country. There also are studios that specialize in teaching sports, such as karate, tai chi, kempo, kickboxing, and jujitsu. The following is one adventurous reporter's journey into the martial arts world of the Central Coast. 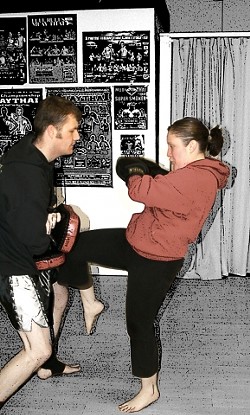 # When people find out that I am an avid Muay Thai kickboxer, I usually get one of two reactions: "Wow, that's so cool!" or "Really? You?" More often than not, I hear the latter.

Although my pride does get a little hurt by some people's unwillingness to believe in my ass-kicking abilities, I can't blame them. I am what you might refer to as a "gentle soul."

I like bubble baths and fruity smelling candles, and I squeal uncontrollably whenever I see puppies or kittens. I also sing show tunes--a lot. But don't let my ardent love of Stephen Sondheim fool you. I can still throw a mean double jab and knee you in the stomach.

Muay Thai is a form of kickboxing that began in Thailand in the Middle Ages as a form of military combat training. It incorporates traditional punch combinations with several kinds of leg kicks. (And if you're really good, you get to throw in some knee and elbow jabs, too.)

Today, Muay Thai is regarded as a prestigious national sport. Many Thai boys begin training at young ages to become skilled fighters, and Thai girls learn it as a form of self-defense.

True to my nature, I began Muay Thai kickboxing as an act of love. I wanted to get in shape while spending more time with my boyfriend. But let me tell you, it wasn't pretty.

During my first couple of classes, I had trouble getting through the entire hour without having the urge to spew into my boxing gloves. My body and my mind just weren't used to getting such an intense workout.

The hardest part about Muay Thai is that you have to be on your toes at all times, literally. The proper fighting stance requires that you stay poised on the balls of your feet in order to optimize your kick rotation. Not being on your toes, as I've learned, makes you look and kick like a broken sprinkler.

After weeks of awkward, and sometimes painful, kicks, I learned how to land a solid straight right-hand punch. I'd also gained discipline, confidence, and a respect for Thai culture.

I haven't made it into the ring yet, but the encouragement I receive from my fellow kickboxers inspires me to look beyond my supposed limitations. It makes me believe that even a peace-loving theater geek can be a bad ass.

Amy Asman is a staff writer for the Sun, New Times' sister paper in Santa Maria--and she's giving Chuck Norris a run for his money. Send comments or ideas to aasman@santamariasun.com.