The historic Sanitarium may soon become a sorority house 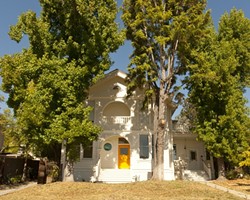 A number of historic structures line Osos Street in San Luis Obispo’s railroad district, but few stand out like the Sanitarium.

During the 1880s, architects designed its arched façade, lacquered in pearl white, to welcome patients recovering from surgery and non-communicable diseases. After serving as a private hospital, the Sanitarium—like many buildings in the district—became a railroad flophouse and, eventually, a private residence.

Following an extensive remodel several years ago, owner Suzi Bliss opened a bed and breakfast in the building. The Sanitarium Spa also became known locally as an off-downtown venue for live music and community events, but the building now appears to be poised to take on yet another new identity.

Kappa Kappa Gamma, a new sorority at Cal Poly, applied to the city in July to rent out the Sanitarium as a home for 10 chapter members. As the old hospital prepared to change uses again, some locals wondered what would become of its status as a cultural institution.

Nick Larson of the local band Proxima Parada played his first gig at the Sanitarium. He said he thought something was up when the owners cancelled the band’s August show without offering to reschedule.

“That really is such a rare venue,” Larson remarked. “Every time we played there, it always felt like a special night.”

Bliss said she decided to lease out the building because she plans to leave SLO for five years. She added that her interest in holding events waned after one particular neighbor begun making noise complaints.

“We can’t afford to have a venue there anymore,” Bliss said. “That one person’s voice counted.”

Before KKG can move in, the sorority must get approval from the SLO Planning Commission. KKG must convince commissioners during a Sept. 25 hearing that another high-density residence won’t strain parking or adversely impact the character of the neighborhood.

“There is a fraternity house next door and to the north,” Becher wrote. “And the Establishment across Osos Street has been a multi-student housing facility since the mid-1960s, housing up to 30 residents.” (According to the Establishment’s owners, the intentional community has had exactly 19 residents for almost 30 years).

City planner Brian Leveille told New Times on Sept. 10 that he had just begun reviewing the KKG application in depth. He said a staff report wouldn’t become publicly available until Sept. 20 at the earliest.

“We’re supportive of that use [as a sorority], but we still need to verify some things,” Leveille said.

Local chapter members referred questions about the fate of the venue to KKG Vice President Elizabeth Bailey in Columbus, Ohio. Bailey confirmed that the sorority is seeking to lease the building as a residence. The permit sought wouldn’t allow for any music or events to occur at the location, she said, beyond occasional sorority-related organized meals for the local chapter.

If the SLO Planning Commission approves KKG’s use permit, the sorority could open its chapter house unless someone appeals the decision to the City Council.