Tom O'Connor directs this sequel to the 2017 film The Hitman's Bodyguard, about formerly AAA-rated bodyguard, Michael Bryce (Ryan Reynolds), who was tasked with protecting hitman Darius Kincaid (Samuel L. Jackson), who was scheduled to testify in the International Criminal Court. As they fought off bad guys trying to stop Darius from testifying, they formed a kind of friendship. This time around, Darius' wife, Sonia (Salma Hayek), enlists Bryce to retrieve her husband from some mobsters, setting in motion a series of international misadventures. (99 min.) 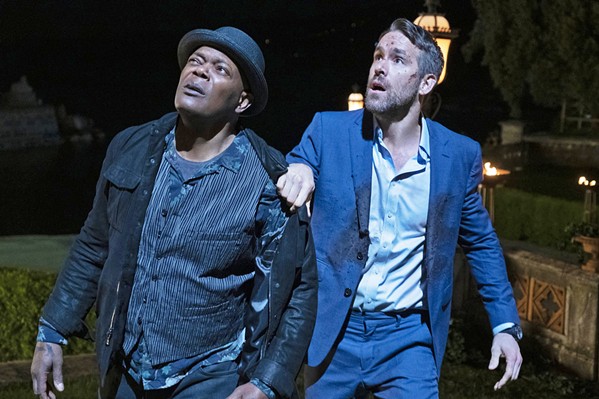 Glen I'm so excited to be back in theaters that even this so-so sequel felt like a worthy excuse to pony up some dough and sit in a dark room with strangers. If you saw the first movie, you know what to expect. Bryce is a former top-rated bodyguard who's fallen from grace and desperately wants to regain his triple-A rating. He's in therapy, but he's so needy and desperate for validation that even his therapist wants to get rid of him, telling him he's "graduated" from therapy and that he needs to put down the guns, give up on bodyguarding, and learn to make peace with himself. He heads to a tropical resort to do just that. Kincaid is a profane, violent, and basically unkillable killer whose wife, Sonia, is even more profane and violent. If you don't like gunfire and F-bombs, this isn't the film for you. Essentially, the trio finds themselves under threat by Greek criminal Aristotle Papdopolous (Antonio Banderas, who definitely doesn't sound Greek ... at all). Aristotle, bristling at the treatment Greece received during the global recession, has a plan to tap into the European Union's grid and destroy its economy. It all makes about as much sense as casting Spanish Banderas as a Greek. Desperate to survive, Bryce goes to the only place he can think of: his stepfather Bryce Sr.'s (Morgan Freeman) Tuscan villa. Bryce Sr. turns out to be full of surprises as the story moves forward.

Anna I know I saw its predecessor, but I completely forgot about it, and I came in to this movie not knowing it was a sequel. That being said, it was an easy watch, and the storyline isn't hard to catch up on even if you didn't see the first film or (like me) totally forgot about it. Reynolds has a great brand of comedy, and he plays it up here. It's big and loud, and while every joke isn't a pot of gold, there are some great quippy moments between the characters, and the cast isn't lacking in the least—this is full of big names. Hayek plays the perfect foulmouthed hottie who has no qualms about shooting her way out of a problem, but what she wants most in the world is to be a mother. Her new husband, Darius, is a handful himself, and the two are a lot of fun together on-screen. I have to think having Banderas play a Greek guy who in no stretch of the imagination sounds Greek is a joke written into the script—if you let the discrepancy irk you, it could be annoying. It's best to just let him be the generic bad guy and not let it ruin the film for you. This flick is silly and ridiculous, but I'd watch pretty much anything in the theater now since we were deprived for so long. You could do a lot worse than this action-filled romp. It's worth beating the heat for a bit and settling into one of Downtown Centre's comfy recliners and cool AC to have some fun with Reynolds and company.

Glen Reynolds is very funny here, but his Bryce is a bit more of a sniveler than many of his other characters, such as Deadpool or Van Wilder. It's also pretty fun watching Freeman play against type, and there's undeniable chemistry between the cast. Bryce and Kincaid are an odd couple, which is the source of the story's tension and humor, but the story itself is pretty ridiculous. Richard Grant returns as the insufferable Seifert, an old client of Bryce's, but he's woefully underused and his appearance goes nowhere. There are exotic and beautiful locales, but again, nothing much is made of them. This is a film that might have been above average, but the writing simply isn't worthy of the terrific cast. Even with its flaws, however, it's an enjoyable 99-minute diversion. I didn't love it, but I don't regret the time I spent watching bullets fly and bad guys die.

Anna It's not going to be up for any awards, but that doesn't mean it isn't a fun watch. The script is definitely a little punchy, and like you said, it doesn't deserve this cast, but I'm not going to complain—the cast is what makes even a mediocre flick fun to watch and is for sure the best thing going for this budding franchise. I'm not sure whether they'll decide to eek this series out any more, but I hope not. This feels like a nice ending, and anything beyond it is going to feel pretty tired. We're rolling into summer blockbuster season, and this innocuous action movie is a nice warm-up for plenty more mindlessly fun movies to come. We saw a preview for the new Fast and Furious film that is on its way, and boy oh boy, talk about an explosives budget! The Hitman's Wife's Bodyguard is much more my speed. It's an easy watch and the cast brings out the best parts of a pretty predictable script. Δ