In a special screening, a new documentary shows how Beethoven's final symphony continues to shape the world

There’s something in the experience of Beethoven’s Ninth Symphony that leaves the listener almost naked, as if this particular piece of music had cut straight through everyday banalities into something human and vulnerable and universal. The final movement’s chorus alone is so rapturous that one is almost embarrassed by its beauty, its power to engulf the senses.

But in the Ninth, as in life, great joy is experienced most acutely when it’s preceded by great suffering and struggle. When, in Kerry Candaele’s new documentary film Following the Ninth, conductor George Mathew describes the third movement as “the mirror,” speaking of the insecurity felt by all, and the “sad and moving artistic predicament” of being deaf while composing one of the world’s greatest pieces of music, we know what he’s talking about.

Following the Ninth: In the Footsteps of Beethoven’s Final Symphony examines the ways in which the Ninth Symphony has made an impact on people engaged in struggles for freedom around the world. In Chile under the Pinochet dictatorship, for example, women sang a version of the Ninth outside torture prisons, giving hope to the prisoners inside. Student protesters at Tiananmen Square played the Ninth over loudspeakers to drown out the government’s orders, and continued to play it as army tanks closed in on them. Candaele weaves these dramatic accounts with similar tales of inspiration from the former East Germany and modern Japan, revealing their common thread.

Presented by the San Luis Obispo International Film Festival, in collaboration with Festival Mozaic, Following the Ninth screens at the Fremont Theatre on Wednesday, July 10. (The event, which kicks off a series of SLOIFF screenings leading up to next year’s festival in March 2014, will be followed by a Q&A with director Candaele and an after-party at Luis Wine Bar.)

Born in Vancouver, British Columbia, and raised in Lompoc, Candaele has previously produced the documentaries Wal-Mart and Iraq for Sale—both films with a distinct social justice bent. Following the Ninth, his directorial debut, is less about “issues” and more about the people involved in them, people for whom the Ninth acted as a healing, emboldening, or cathartic force.

The Ninth is the heart of each story, and Candaele, fittingly, uses the symphony’s four movements to loosely orient the film. The opening of the first movement is serene and still, and conductor George Mathew likens it to the beginning of the world; the introduction of the strings signaling “the spirit of God hovering over the waters.” 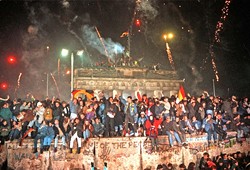 But as the first movement builds, the mood turns stormy and chaotic, coinciding with an atmosphere of gradual social unrest. Candaele interviews former student organizers at Tiananmen Square—among them Feng Congde, one of the protest’s leaders. In Chile, he profiles Isabel Lipthay and Renato “Machi” Alvarado, the latter a former political prisoner under Pinochet. In Germany, we meet Lene Ford, who describes growing up in East Berlin, where, as a teenager, she was put under surveillance by the Stasi for having pen pals in the West.

The unrest builds with the second movement—called the Scherzo, or joke (though, as Mathew points out, it’s anything but)—and the film draws us further into these stories of cruelty, paranoia, and repression, revealing to us their sobering patterns. Interviews with Alvarado, Congde, Ford, and others are supplemented with now-famous archival footage: Chilean women marching with grainy photos of the dead and the missing; the Chinese student blocking the path of the tank.

Running parallel to these tales of fear and struggle is another, slightly different story, and it’s that of the Ninth and its cultural significance in Japan, where the symphony, known as Daiku, has become a symbol of national celebration. Performances of Daiku traditionally take place in December, often with a choir of thousands of people, who’ve spent half the year rehearsing the German choral section.

Cinematographically, the Japanese setting seems to have provided the most inspiration (Chris Bottoms and Nick Higgins both worked as directors of photography). Beautifully framed shots of Tokyo’s bustling, color-saturated streets are scored by a rather cartoony-sounding version of Daiku, to a wonderfully disorienting effect.

The film also weaves in expert opinions, the most insightful of which come from Mathew—a Singapore-born Indian and founder of Music for Life International, an organization that uses classical music to benefit humanitarian causes. With his commentary, the viewer’s appreciation of the Ninth is immediately elevated. (“It’s primordial violence,” Mathew says of the work’s first movement, a wild look in his eye. “It enters your bloodstream and changes who you are.”)

The fourth and final movement brings a great explosion of happiness, freedom, and catharsis, and after all the suffering he has shown us, Candaele delivers a resolution so joyful it hurts. Walls tumble town. Strangers embrace. Alle Menschen werden Brüder—if only for a moment. ∆

Arts Editor Anna Weltner is an ode to joy. Contact her at aweltner@newtimesslo.com.