Is homeless advocate Dan DeVaul's stubbornness a blessing or a curse? 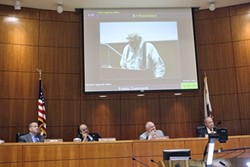 One of Dan DeVaul’s saving graces as he’s fought SLO County both in and outside court for many years—aside from the shelter he provides for chronically homeless, mentally ill, and addicted residents at his Sunny Acres sober living facility—has been his unflinching, bullheaded attitude. DeVaul absolutely refuses to budge when it comes to fixing building-code violations at his ranch. This particular personality quirk landed him in jail when he could have accepted probation after being found guilty of two misdemeanor criminal charges; it cost him the seizure and forced storage of his prized car collection; and most recently it stalled promising negotiations that could well have led to a county compromise.

It seems as though his steadfast go-to-hell attitude could pay off, if for no other reason than county officials simply want to close the books on the saga. As one of DeVaul’s many legal representatives summed up the situation, “The county does not want to keep bleeding money on it.”

Asked whether negotiations between DeVaul and the county might end soon, County Counsel Warren Jensen groaned, “Who knows. Hopefully soon, but you have to have two sides fully willing to reach a deal. But right now it’s encouraging—I can say that.”

What DeVaul wants, essentially, is to erase all of the legal battles he’s had with the county and resulting punishment.

For about a decade, DeVaul has fought charges he is violating county codes by storing junk on his ranch just outside of SLO and housing people in dangerous structures. Since July 2009, he’s been negotiating with the SLO County Counsel and the Sacramento intermediary firm Porter Scott Attorneys. Until recently, the negotiations were going well. Speaking before the Board of Supervisors on Feb. 23, DeVaul said, “We’ve done wonderful in those negotiations.”

Then he dropped the bad news: There’s no way he’s going to drop a lawsuit (writ of mandate) he filed against the county, even if it stalls the positive deals made thus far.

He told New Times he sees no reason to drop his lawsuit and if he does, he’d face at least $25,000 in court costs and about $60,000 to $70,000 in accrued fines from County Code Enforcement. If DeVaul wins his lawsuit—filed in early 2008—he could be absolved of the alleged code violations and associated fines as well as compensated for his court costs.

That lawsuit is potentially the last hurdle before DeVaul and the county can achieve at least a cordial relationship. “We kind of struck a sour note in that they want to demand that I drop the writ of mandate in order to let me proceed with what we negotiated for,” DeVaul told New Times.

So far the negotiations have produced some long-belated compromises. DeVaul said the county has agreed to allow him to build a 6,000-square-foot residence for Sunny Acres clients and there have been other agreements “which would lead to putting all of the building code violations or whatever problems on the property aside so that we could go ahead on a clean bill of health.” But DeVaul’s lawsuit has seemingly stymied those deals.

According to DeVaul, it doesn’t make sense why his lawsuit should be tied up with the negotiations. But ask Terence Cassidy, an attorney for Porter Scott Attorneys, and he thinks the main goal of the negotiations was to take the fight out of court.

“I think it’s safe to say that in any prospective negotiations that both sides would expect,” he paused and laughed sardonically, “that it is for the purpose of resolving any potential or actual litigation such as the complaint that’s been filed by Mr. DeVaul or any enforcement action that’s been filed by the county.”

DeVaul’s criminal proceedings last year (he was acquitted of most criminal code violation charges but convicted for fire safety violations and unlawful car storage, both of which he is appealing) and the corresponding media coverage transformed him from local celebrity to a national symbol against government apathy toward the homeless. The New York Times and Los Angeles Times both published features about DeVaul’s tribulations. At the recent board meeting, DeVaul was even accompanied by a Los Angeles film crew documenting his story.

The media explosion was enough to prompt Jim Duenow to write an opinion piece for the Tribune last December. Duenow, a local homeless advocate, attorney, and member of an independent citizens’ committee that unsuccessfully tried to reach a compromise with DeVaul, considers DeVaul a man who will never back down and who loves the resulting attention.

“I don’t think he’ll ever change,” Duenow told New Times, adding, “We just all basically threw up our hands. It’s too bad because, you know, he at least is providing some shelter.”

While the battles have waned and mounted, residents of Sunny Acres have been caught in the middle. At the Feb. 23 meeting, DeVaul was joined by a stream of residents who begged the county not to shut down Sunny Acres and take the only home they have. None of them believe there are adequate public services to match those DeVaul provides.

Darcene Clayton, a slender, stern woman with gray hair and black-rimmed glasses, glared at the supervisors.

“If they were to kick me out tomorrow, I would be out on the streets and I would not be able to survive,” she said. “I would die.”