The impact of absence: Jim apRoberts gathers global following with paintings focused on the politically abducted

There’s a certain kind of closure that comes with losing someone to death, with knowing that that they’re gone and never coming back. But what if someone you love just vanished?

That’s what happed to the families of at least 13,000 people in Argentina in the mid 1970s to the early 1980s. Anyone believed to be associated with socialism was “disappeared” by the government, gone without a trace.

Those victims are known as los desaparecidos or the missing people. Their memory has inspired the work of San Luis Obispo-based artist Jim apRoberts for the last 10 years.

“That’s always been my intent, to honor those people who are lost. It was a tragedy,” he said.

The paintings that focus on los desaparecidos are teeming with bright colors and often feature abstract depictions of people stuck in boxes, location unknown.

Many of apRoberts’ global admirers—he has 5,000 friends on his personal Facebook account and about 5,700 fans on his artist’s page—hail from places such as Japan, Africa, South America, Europe, and all over the U.S.—are also unsure about his location. Based on his abstract, bright style that often incorporates coastal elements, many guess that he’s from Mexico, South America, or New Mexico. Some rightly guess that he’s a surfer from California. ApRoberts, who is in his 60s, is also amused that based on his work, many people think he’s a much younger artist. 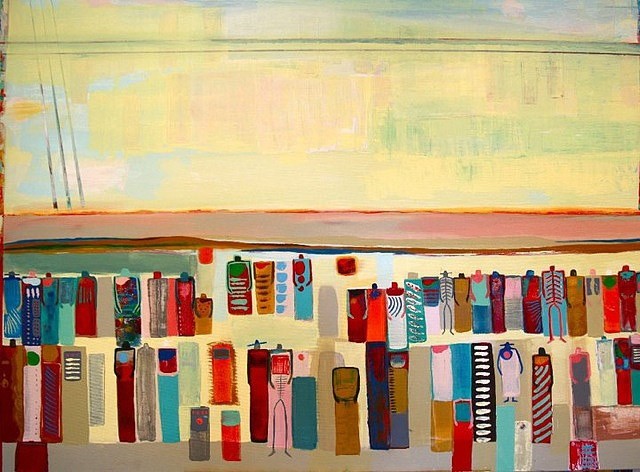 “I think I’m very free with what I do,” he said. “I also don’t have any expectations, and I’m really sort of surprised when people like what I do. But I think art should be ageless in terms of its appeal.”

ApRoberts, who previously owned a stained glass business, has never had a single art lesson.

“It was never on my radar [to take art lessons], and I didn’t want to have someone else’s influences,” he said. “I have a hard time identifying with that word artist. I think I’m more of a craftsman painter.”

He aspires to eventually show his work in Europe or Argentina, but given that it costs more to get his art over there than it would to fly there, that could take some time.

“My goal in sharing my work over there isn’t so much how much money I’m going to make as it is just sharing it,” he said.

In the meantime, local fans of apRoberts’ work can check out his paintings at Sans Liege Wines in Pismo Beach through Nov. 30.