The Invisible Man breathes new life into an old monster

Writer-director Leigh Whannell (Insidious 3, Upgrade) helms this new iteration of the H.G. Wells 1897 horror novel about a brilliant but disturbed scientist who develops a technique to render himself invisible. In Whannell's version, the brilliant scientist is Adrian Griffin (Oliver Jackson-Cohen), abusive partner to Cecilia Kass (Elisabeth Moss). Cecilia—with the help of her sister, Alice (Harriet Dyer); their childhood friend, James Lanier (Aldis Hodge); and his teenage daughter, Sydney (Storm Reid)—escapes Adrian in the dead of night. Later, Adrian purportedly commits suicide and leaves Cecilia some of his fortune, but she begins to suspect his death was a hoax as strange events happen and lethal accidents befall those she loves most. Is she going insane, or is she being tormented by an invisible entity? (124 min.)

Glen One hundred and twenty-three years after H.G. Wells conceived of The Invisible Man, and 87 years after director James Whale first brought the story to the silver screen, the idea remains fresh thanks to Whannell's thoughtful adaptation of the story that weaves in #MeToo-style abuse, the ultimate form of gaslighting, and female empowerment. The film opens with a taut sequence of Cecilia slipping out of Adrian's modernist, vault-like Stinson Beach house. She clearly fears for her life, and it doesn't take long to find out why: Adrian is a control freak of the first order. He's so cruel and calculating—and so personally aggrieved by Cecilia's departure—that he'd rather torture her than merely kill her. Adrian enlists his attorney brother, Tom (Michael Dorman), to administer his will, which leaves Cecilia $5 million, provided she's sane and commits no crimes, but when you have a malevolent, invisible stalker tormenting you, even a perfectly sane person can seem really, really crazy. Even her sister and her friend James begin to wonder what's going on, since everyone knows there's no such thing as invisibility. There's a lot of tense moments as Cecilia senses Adrian's presence but can't locate him. The special effects are quite good here—for instance, when Adrian's breath appears on a cold night, when she dumps paint on him, and when he's thrashing her and she moves in impossible ways around a room. Much of the film's success rests on a terrific performance by Moss. This is an effective thriller and a lot of fun, especially when Cecilia begins to turn the tables on her tormentor.

Anna This is a real "got or be gotten" approach to the story, and Adrian's cruelty and calculated plan is nothing short of ingeniously evil. Their dramatic, cold, undeniably beautiful home overlooks a turbulent rocky shoreline and is guarded by gates, cameras, and their Doberman Pinscher, Zeus. It's clear that Cecilia's plan has been brewing for a while. How to escape the man who refuses to be bested and is a card-carrying genius is no easy task. She's worked through every what-if, hidden her go bag and necessities safely away, and planned her escape down to the second. Why can't it all go perfectly after that? Admittedly, that would not make for the psychological thriller this story turns out to be. Adrian wakes as she runs to her freedom, and while she makes it out, it isn't without him discovering who she's with and doing some damage as she flees. Even in the home of James—a 6-foot-tall slab-of-muscle cop—she can barely step out of the house. Every sound, every person is instant panic. She knows in that deep-down way that Adrian will come for her, even with everyone around her promising to keep her safe. When the invisible source starts its torment, convincing everyone that she hasn't gone over the edge is impossible. She looks and sounds totally bonkers, and soon Adrian's vindictive plot turns from dark to downright devilish. Moss is great here—both her fear and conviction are palpable. It's eerie and uneasy, definitely a tension-filled ride with plenty of twists I just didn't see coming. 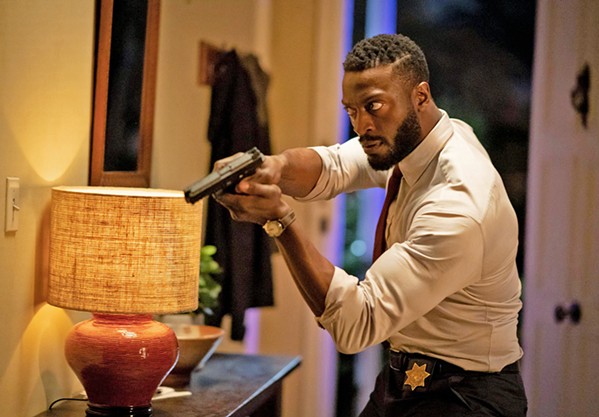 Glen Have you ever had the unsettling sensation that you're being watched? Imagine living with that 24/7! Cecilia is an emotional wreck, a thin wire stretched to its breaking point. Alice and James want to believe her, but she comes off as irrationally paranoid, and soon she finds herself hospitalized. Of course Adrian's psychological torture can only go on for so long, and as Cecilia continues to resist, he's forced to go beyond making her look crazy and instead making her look criminal. Imagine the frustration of knowing you're being plagued by an evil genius but no one will believe you. Moss is terrific at playing desperate, but she's also great at playing determined. If you're a fan of I Spit on Your Grave (1978), as I am, you'll savor the satisfaction as Cecilia navigates Adrian's ingenious manipulations and gaslighting, slowly but assuredly setting up a conclusion that will satisfy your bloodlust for Adrian getting what he so richly deserves. He thinks he's smarter than everyone, but once Cecilia finds her inner strength, Adrian discovers he didn't think of everything, and even geniuses can be outsmarted.

Anna It's very much a boogieman feel as Cecilia tries to navigate the sinking suspicion that she isn't alone. Spooky things slowly start to take over her life—from blankets that seem to be stood on by some unseen force to emails from her account ruining her relationship with someone close to her. When you blame the dead for what looks like your behavior and frantically explain how they must be alive and invisible, chances are that even your biggest supporters are going to think you've finally broken after years of abuse. Cecilia knows she isn't out of her mind and will do whatever she can to vindicate herself. The idea of an invisible monster is terrifying. You never know where they are, if the are coming for you, or worse yet, coming for someone you love. They can ruin your life right in front of you and you can't even see it coming. This was a solid thriller, and in the end, Cecilia's brand of justice is satisfying and badass. Δ