When I asked Eddie Izzard, “What rock star—or combinations of rock stars—would you be, living or dead?” he had a quip ready to go.

Not many comics receive the kind of reception Izzard enjoys across the world (shrieks of mad laughter, Beatles-like adoration). Perhaps it’s because the larger-than-life “action transvestite” has a way of making the Earth a bit smaller, its universal inhabitants feel a bit cozier. 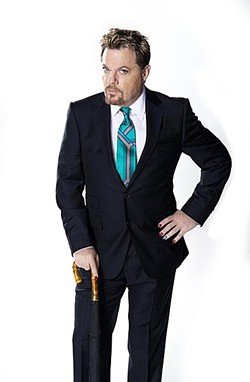 The complete history of human existence—with all of its strange punch lines and absurd tragedies—resides in that beautiful blond head of his. Izzard will share his energetic stream-of-consciousness wit and wisdom with San Luis Obispo on June 10 at the Cal Poly PAC.

Truth be told, “The Izzard King” has been keeping quite busy, and not just as a vibrant fixture of the British political scene (he plans to run for political office by 2019). Last year, the comedian performed 50 shows in 32 U.S. cities in 64 days. His current tour, Force Majeure, is the most extensive comedy tour ever conceived, taking Izzard to 25 countries on five continents.

Oh, and just to amp things up further, Izzard is performing French dates entirely in French, Berlin dates entirely in German and—you guessed it—plans to learn and perform the show in Spanish, Russian, and Arabic, too.

You know, just to spice things up.

Really, I’d like to see a rock star do what Izzard does with one expertly-lined eye closed. If you ask me, he knows exactly how to keep a global audience begging for more: Strut like Jagger, think like a philosopher, and always keep moving into deeper, more hilariously profound waters. Oh, and never put a sock in the toaster.

Hayley Thomas: I’ve probably learned more about world history from your stand-up than from any of my teachers. What has fueled your lifelong passion for history?

Eddie Izzard: In school, I didn’t like history, because they said, ‘Write essays.’ I did like the stuff that happened throughout history. When I got into standup, I was a white, male, middle-class standup. I was ‘out’ as being transgender, but that didn’t really make a difference. I suddenly realized history was something I could do, and it struck me later that this was something Monty Python had done as well. It was just sitting there; no one was doing stuff on history. In the back of my mind, I was also heading toward politics—which I am definitely going for [now]. So, I realized that you can learn to read human failings and strengths through the repeats of humanity and history. It was useful on a human level, and I found it fascinating. In Stone Age times—5,000 years ago—we had the same brains, and we were going, ‘Hey, this is shit. Africa is great, but let’s get out of here. It’s too hot.’ So, we can go through Sinai in Egypt, and eventually, we go through Yemen. I like looking at all these things that have happened over the centuries. We have one life—no one has proven that we have anything more—so let’s have a look at this stuff and see what we can find out.

Thomas: We thank you for that! It’s a noble thing to do. That sounds silly, but you make history come alive.

Izzard: I don’t think it’s noble, but I do think it’s useful. It’s practical, intriguing from a human-being scale. If you look back at ancient warlords and ancient kings, it’s amazing that we got into democracy. Look at the Greeks and Romans. They had 500 years of democracy—500 years. Then, we went back into kings. If you think about British democracy, we’ve only done 400 years now, and that means that the Romans had a longer period of democracy than we’ve had in the modern era of democracy.

Thomas: That is blowing my mind. I was listening to a podcast with you back in 2009 where you predicted Arnold Schwarzenegger’s return to the Terminator franchise—

Izzard: Ha. I don’t think it’s that clever of a prediction…

Thomas: Well, where I was going with that is: How do you walk the line between show biz and politics? I imagine you think about this quite a bit.

Izzard: The scheduling—that is the only problem. Everything I have done and said comedically or artistically has been mixed in with my political leanings. Essentially, I’m doing what Al Franken has done.

Thomas: It must be rewarding to be able to have this platform to speak out on the issues you care about, to make a difference.

Izzard: Once I get there, it certainly will. It’s tough, because you get a lot of hatred for doing it. There is more indifference in terms of being creative. You will be ignored if you fail in the creative medium. You will be attacked if you fail in the political medium. I follow American politics quite closely. What I’ve noticed around the world is that we have extremists in every country, yet every extremist hates each other, because they are nationalists and hate other countries. Ha! That is a curious thing. I feel that the people that are way off kilter—say, The American Tea Party—could happily hang out with the UK Independence Party or the Freedom Party of Holland. I think the switched-on intelligent people—we have as many of those people in America, Britain, France, and in Russia—I think it’s equally handed out. But if you get a government in there that’s oppressing people, then you can’t see those switched-on people.

Thomas: The honest way you move through the world, present yourself—you are punk rock. Do you have any advice for anyone who hasn’t found who they are? How did you navigate your way to becoming self-possessed?

Izzard: You have to keep pushing forward. You have to feel the fear and do it anyway. That’s what I did. I came out when I was 23. If you are LGBT, you have to come out to the big cities, the big towns, and meet other people who are positive-minded. You can live your life as a lie, but that’s not a good place to be. People who hate LGBT people are probably LGBT people themselves. People have to come out as early they can, in their teenage years or in their 20s. It’s genetic, built-in, not a choice. It does get better. I suggest going to itgetsbetter.org. It’s got loads of stories about how things can get better. If you just want to find yourself in the world, I always say ‘go for your dreams.’ Go fight hard. There’s a lot of things built into America that I like—the ‘get up and go,’ and ‘let’s build it.’ Then, I believe we should help other people and give others a chance. Don’t close off the avenues. That’s the way it should be. Some people work hard and get somewhere, then want to stop everyone else from getting what they have. That’s just not how it should be.

Thomas: With the new languages you learn and the marathons and the political goals—I have to ask—how early do you get up in the morning?

Izzard: I certainly have a determination gene. The languages, that comes down to having the determination to learn it. When I’m on stage in a country, I want to show positivity by speaking the language. Also, it’s good business sense. I’m now touring France, and I am the first English-speaker—English being my mother tongue—to perform an entire show in French, ever. That’s a beautiful thing. I get to go to all these different cities in France, and it’s a bit of a holiday, albeit a hard-working holiday where I’ll work my backside off.

Thomas: You started off as a street performer. Is that hungry underdog still living inside of you? When you’re performing some place like the Hollywood Bowl, do you still feel that drive?

Izzard: Yeah, I do believe it made me. It made me because it was so hard and I failed so badly. Eventually, I learned to do it. That was like being in the Marines of creativity. The reason I could perform any large venue—like the Hollywood Bowl, which I was the first comedian to sell it out—was because I was a street performer. Most comedians wouldn’t do it.

Thomas: But you’re not a rock star.

Izzard: Rock stars do ‘feel’ gigs. I do ‘mind’ gigs. A rock star goes out and makes a bunch of people feel really good. Comedians go out there and put a bunch of ideas in peoples’ heads.

Thomas: During your travels in America, have you come across any obscure or interesting historical places that really spoke to you?

Izzard: It was good to go to Gettysburg. I know a lot about the American Civil War and the Revolutionary War. If I were a kid in the 1770s, I would have been out there and fought in the Revolutionary War and the Civil War. I find it interesting to see those places, to think about how during the Battle of Gettysburg, Chamberlain improvised a plan. How he eventually had to go back down south the next day, because they had lost the round tops. I know these battles. I also went to Shiloh, where Ulysses S. Grant won his third battle and I got to see this tree he was leaning up against. General Sherman told Grant, ‘We got to pull out,’ but it didn’t look like Grant was going to pull out. Sherman said, ‘We’ve had the Devil’s own day today,’ and Grant said, ‘Yeah, but we’ll lick ‘em tomorrow,’ and they did. I think I would have quite liked Ulysses S. Grant, he was relentless. He wasn’t terribly flashy—he wasn’t a Napoleonic general. But he was up front, get on it, and go for it. I liked that about him.


Thomas: That seems to hit straight at the heart of who you are. A go for it person.

Hayley Thomas is beefing up on her world history at hthomas@newtimesslo.com.