As we walk in, a row of artists are situated under the shade of a line of trees, each creating art live, on-the-spot. The first musical artist, Trevor Green, has just finished, and the stage crew works to set up Dead Feather Moon, a San Diego-based alternative rock act. Three members of the circus arts troupe Nomadik dressed as Alice in Wonderland characters stroll through the crowd on stilts

People have set up chairs in front of the stage and in various shade areas provided by whimsical structures featuring colorful canvas canopies. Only about an hour into the eight-hour event, the place is already filling up, though it’s hard to tell because the layout is spread over a vast area. There’s plenty of room to move, which is great for someone like me who doesn’t like to get trapped in huge crowds. 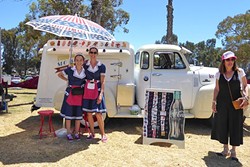 Like many festivals, it’s a bit pricey: $10 parking fee, $22 admission, $32 more if you want to taste the creations of the chefs involved in the oyster preparation competition, $13 for a beer with a pint glass, and another $8 for a refill. But it’s also a “zero waste” festival that tries to completely eliminate trash. It also offers free hydration stations, $10 admission for kids 13 to 17, and free admission for kids 12 and under as well as adults 55 or older.

There’s lots of food and beverages to choose from, plenty to look at, lots of entertainment onstage and moving through the crowd—in short, it’s everything you could expect from a food, culture, and music festival. And judging from all the happy people, they think so too!

If you missed it, never fear—the sixth annual fest is just a year away!

The world is Glen Starkey’s oyster. Contact him at gstarkey@newtimesslo.com. 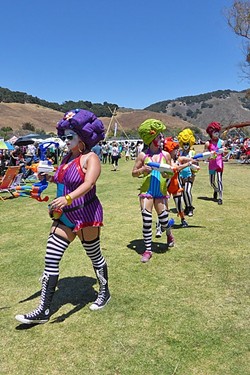 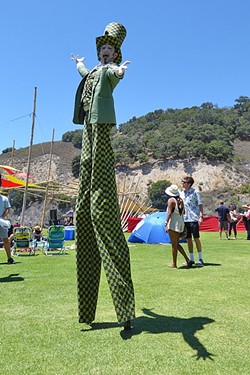