The king of red wines

A Paso Robles tasting unveiled many outstanding cabs worth buying

In 1996 there were very few wineries in Paso Robles, but nearly all of them were making cabernet sauvignon and cabernet blends. Even then, it was clear that those foresighted winemakers were already on the road toward making the exemplary Bordeaux style reds they release each vintage. Yet during that time when Paso Robles’ pioneers started planting premium vineyards, the wine critics in national publications believed only Napa Valley could turn out world class Bordeaux varieties. Our neighbors in Monterey and Santa Barbara County appellations were snubbed, and their cabernet sauvignons paled in comparison to Paso Robles. All the same, the critics could not foresee what would come, though they see it now. 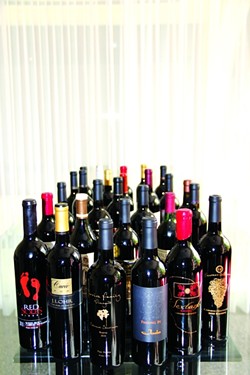 Everything changed dramatically in a relatively short amount of time.  Thanks to the pioneers, Paso wine country began attracting many more artisan winemakers who were not only passionate about growing and making the finest wines, they experimented with all kinds of grape varieties. Most of them were crazy enough to risk going broke along that long road to establish their dreams, but they exceeded far beyond their hopes. That has been happening in wine growing regions throughout the states as more dreamers buy land to plant vineyards and create artisan brands.

Of course, once these passionate winemakers establish a great winegrowing region, the big producers always show up to cash in on their success. Despite the rapid growth of wineries in Paso Robles, it remains in the hands of the small producers to set the bar for quality.

In 2012 a new event was established: the Paso Robles Cab Collective (PRCC). The event was created by highly motivated, small producers that were willing to stake their money and their reputation on proving that Paso Robles excels at making world class cabernet sauvignons and cabernet blends.

Watch for my upcoming column about the Cabs of Distinction Gala on Saturday, April 26, with details about the grand tasting, catered lunch, chocolate tastings, and much more. During a recent media tasting, I found many outstanding Paso Robles cabs that I know you will want to seek out during the big tasting event. Some of them are sold out at the tasting rooms, but many are still available for purchase online. Even if you discover they’re gone you can look forward to tasting them at the gala. Here’s a sneak preview of a few of my favorites cabernets.

The Red Soles 2010 Barrel Select Cabernet Sauvignon was so tasty everyone on the tasting panel loved it. This friendly blend opened with red and black cherry flavors that meld with zingy notes of blackberries. It was so nicely balanced, it’s easy drinking now but definitely has the chops to age beautifully. It was made by winemaker Amy Butler, who has built an impressive reputation for her talents in the vineyards and winery. This is Red Soles’ sixth vintage in buying the Miracles Ranch cabernet sauvignon, which they noted always earns gold medals. It’s quite limited; they made 45 cases, priced $60, and only available at the tasting room on Oakdale Road off Hwy. 46 West.

I was pleasantly surprised by the powerful aromas in this impressive cabernet blend: J. Lohr 2010 Cuvee POM Paso Robles. It ranked among the best value-priced cabernets for its quality in the recent tasting. Inspired by the Grand Cru Bordeaux wines in Pomerol (labeled POM), it’s a blend that’s mostly merlot with smaller amounts of cabernet franc and cabernet sauvignon. This layered wine features both red and black fruit characters that constantly draw you back to the glass for another taste. I enjoyed its full-bodied flavors of red and black cherries, plums, spice, dark chocolate, and vanilla. Pair this great wine with your favorite steak, prime rib, or grilled pork chops. Available online and at the tasting room on Airport Road, off Hwy. 46 East,
it’s $50 retail.

A new brand I tasted was also quite a winner: Parrish Family Vineyards 2010 Cabernet Sauvignon Paso Robles. It’s grown on the hillside estate vineyards at 1,200-feet elevation in calcareous soils, where cool Pacific Ocean breezes help maintain the natural acidity in the grapes. It’s 100-percent cabernet sauvignon, aged 22 months in French oak, 60 percent of which were new barrels. I appreciated the rich black fruit flavors and impressive balance in this cab made by owner/winemaker David Parrish, formerly from Napa Valley. His brilliantly balanced cabernet was rich and quite tasty with its blackberry, boysenberry, minerality, and subtle spices. Available at the tasting room on Park Street in downtown Paso Robles, it’s another excellent value for only $50 retail. Last year this vintage won gold medals from the San Francisco and Orange County wine competitions.

Another standout I have liked consistently over the years was the Adelaida 2010 Viking Estate Reserve, which often becomes one of my picks. Not surprisingly, even at $75 retail it’s old out.

The exotic Jada 2011 Jack of Hearts Paso Robles earned huge praise from all of the tasters/writers. Flat out eye-opening, its blend was comprised mostly of petite verdot with cabernet sauvignon and a little merlot. I personally had never tasted a wine with so much petite verdot, and certainly never a standalone that tasted as impressive as Jada’s version. A deep purple hue in the glass leads to exotic, perfectly ripe aromas of blackberries, currants, dark chocolate, minerals, and spice. The flavors are layered and textured so beautifully I couldn’t stay away from the glass; neither could anyone else.

Jada winemaker David Galzignato, formerly from Napa Valley, admitted that 2011 was a problematic vintage for Paso Robles: “Everyone always told me Paso was hot. Then we had the worst frost in seven years.” Each of the wines was grown sustainably in Jada’s estate vineyard, on vines that averaged 11 years of age. That’s young. Had to note the detail that went into the making of this wine: It was hand-harvested at 3 a.m., field-sorted, cluster-sorted, and then berry-sorted once in the winery. It was aged 18 months in French oak barrels, which was beautifully integrated in this outstanding wine. David said it would age well over a decade. As of this writing, there was still a small amount available for sale at the tasting room, and it’s likely you’ll taste it at the CAB Collective gala. That’s typical of Paso Robles these days, when winemakers release their outstanding cabernets and blends they literally disappear from the shelves.