Peter Berg (Friday Night Lights, Lone Survivor, Patriots Day) directs this post 9/11 film about an elite team of FBI investigators seeking the truth about a terrorist bombing on an American military base in Saudi Arabia. The film truly got short shrift upon its release, receiving an unfair 51 percent critics score on rottentomatoes.com. It's one of the most compelling and politically astute films of the genre—perhaps not as good as Green Zone (2010), but it's absolutely gripping and concludes with one of the most intense action sequences ever put to film. 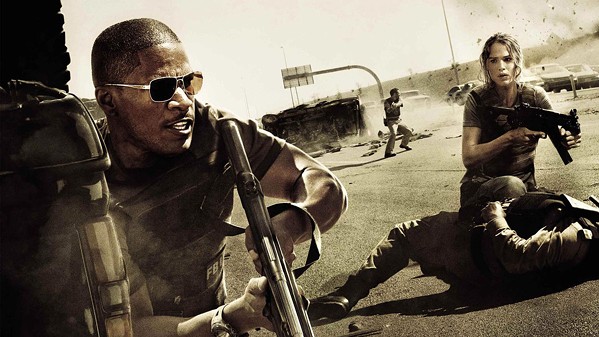 After the bombing on Saudi soil, FBI Agent Ronald Fleury (Jamie Foxx) wants a crack at finding the terrorists, knowing that Saudi authorities will be less than thorough. He assembles his team—Janet Mayes (Jennifer Garner), Grant Sykes (Chris Cooper), and Adam Leavitt (Jason Bateman)—and despite U.S. resistance to sending them in, lands in Saudi Arabia to discover a whole other wall of Arab bureaucracy standing in his way.

With Col. Faris Al Ghazi (Ashraf Barhom), his Saudi liaison, begrudgingly willing to help, Fleury and his team race against time to catch the terrorist cell before it strikes again ... this time with his team as its target. Berg is a terrific director, and this story by Matthew Michael Carnahan (World War Z, Deepwater Horizon) is thoroughly engrossing. (110 min.) Δ