The Kitchen boasts a terrific cast but a terrible story

Andrea Berloff directs this film based on the comic book series by Ollie Masters and Ming Doyle about the wives (Elisabeth Moss, Melissa McCarthy, Tiffany Haddish) of 1970s Hell's Kitchen gangsters who continue to run their husbands' rackets after the men go to prison. (102 min.) 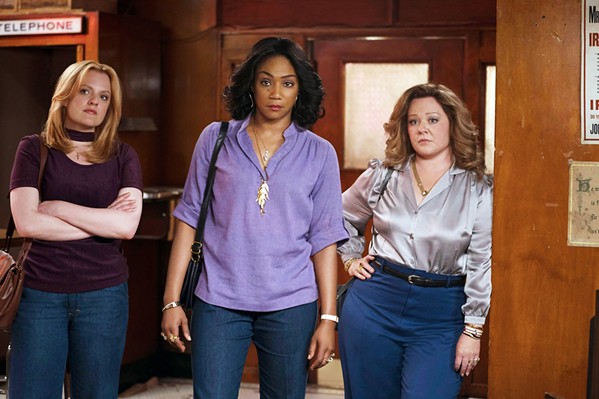 Glen What a shocking waste of acting talent this film is! Not only are the three leads wasted, but there are so many supporting character actors being squandered in support of weak writing and tepid direction. As we meet the women and their husbands, it's pretty clear what sort of relationships they have. Kathy Brennan (McCarthy) seems to have the healthiest relationship with her husband, Jimmy (Brian d'Arcy James), in stark contrasted to Claire Walsh's (Moss) physically abusive husband, Rob (Jeremy Bobb). Then there's African-American Ruby O'Carroll (Haddish), married to Irish mob chief Kevin (James Badge Dale), who seems to take orders from his overbearing mother, Helen (Margo Martindale), who doesn't approve of her black daughter-in-law. These are all very competent actors and yet their characters never feel fully formed—everything is all surface and no depth. When their husbands are arrested in a strong-arm robbery, up the river they go, leaving the remaining Irish mob members to "take care of" the wives. Unfortunately, the envelopes of cash they receive won't even cover their rent, so they have to take matters into their own hands and start running the neighborhood protection rackets. This is the beginning of the contrived and poorly executed start of the plot that becomes more unbelievable as it continues. So much of the story doesn't make sense or simply defies logic. I wanted to like this film, but it just falls flat. Last year's Widows took a similar idea and handled it much more successfully.

Anna It's a bummer that the talented cast had so little to work with in The Kitchen. The characters themselves are little more than predictable archetypes—the meek and battered wife who discovers an aptitude for cutting up bodies, the good Irish mother just looking to feed and clothe her family, and the sassy loudmouth who doesn't mind stepping over people to come out ahead. None of it is particularly interesting. Even with three adept actresses in the spotlight, the script does little to establish any sort of "why" beyond being strapped for cash, while also trying to make an effective storyline about their empowerment and rise to the top of their husbands' organization. The scenes feel lengthy. Instead of interaction, there seems to be a round-robin approach to the dialogue—it's one person's turn to speak, then the next, then the next. Frankly, I can't believe The Kitchen has an audience score as high as it does. There's no denying that this cast could be a lot of fun on screen. The talent's there, it's just woefully underused.

Glen So much of the story doesn't ring true. The shopkeepers in their neighborhood are happy to pay extortion money as long as they "get" something for it? Really? And these shopkeepers are just going to start paying the women instead of the male Irish mobsters who come to collect? We're meant to sympathize with these women, but aside from McCarthy's Kathy, they turn murderous too quickly and easily, and it's hard too maintain sympathy for murderers. The bottom line is they become just as rotten as their husbands. The big difference is they're more competent criminals than the men. Of course, crime is a competitive business, and the women soon have to contend with Brooklyn's Italian mob, headed by Alfonso Coretti (Bill Camp)—so there's that side plot; another side plot about FBI Agent Gary Silvers (Common), who put their husbands away and is now onto them; and yet another side plot about Kathy's relationship with her union worker father, Larry (Wayne Duvall), who disapproves of her daughter's husband and her entry into crime ... until he suddenly isn't anymore. The story's a mess, and it has an impending twist and following resolution that are each so preposterous that I almost blinded myself rolling my eyes. My favorite character was Gabriel O'Malley (Domhnall Gleeson), a former Irish mob enforcer who takes up with Moss' Claire. He teaches her how to stop being a victim. This could have been an entertaining feminist tale of taking control, but instead it's an unbelievable, convoluted tale of corruption. It's maddening to see all that talent on screen running in circles and going nowhere.

Anna Reality is pretty much lost here, and while it's the sort of story that is good in theory, this practice of it is frustratingly banal. Decisions seemingly were made to wrap up loose ends of the storyline, but they don't make any sense or are so underdeveloped it's cringe-worthy. McCarthy is a hilarious actress, but her character isn't allowed even a little bit of humor. Moss is given a bit more to do with her redemption and growth out of the battered wives club and into badassery. Even so, it's far from interesting and predictable in every way. The Kitchen takes itself way too seriously without the storyline or script to back it up. You mentioned Widows, which is a much better version of this story, plus the characters actually gave us something to care about. Not every film can be a winner, and that is evident here—The Kitchen suffers from too many fatal flaws to stop it from circling the drain. Summer can be a rough season for movies, but you're better off skipping this one and saving your movie money for some big, bold summer blockbuster hit. This, quite frankly, is hardly worth the time spent watching it, let alone any actual money on a ticket or rental. Δ